A tale of two-screens: from Echo and Iconia to the DS and Courier

A tale of two-screens: from Echo and Iconia to the DS and Courier

It’s not much of a stretch to label the dual-screen device market a niche experiment. Very few such machines exist, and with a notable exception, very few have made a impact at retail. So it’s more than a bit interesting to see two such devices launch in the same month. The Acer Iconia 6120 Touchbook and Kyocera Echo smartphone tackle the same subject with varying degrees of success and fundamental flaws. Is two at all better than one? Read on to find out.

The Iconia Touchbook is more akin to a proof of concept or a prototype: some great ideas skinned over a platform that can’t handle it (Windows 7) and built into hardware not ready for prime time. The Touchbook, as Acer calls it, weights 6.2 pounds and measures about 1.3 inches thick when closed, which is all just about on par with the Dell XPS 15 equipped with a 9-cell battery. Making it even less portable is a 4-cell Lithium Ion that in practice lasted just over two hours per charge. The two 14-inch, 1366 x 768 touchscreen displays can withstand quite the digit-beating thanks to Gorilla Glass, but at the same time doesn’t always seem to register my clicks. Worse still, the pair suffers from a trifecta of annoyances: heavy glare, pronounced fingerprint smudging, and bad vertical viewing angles. These are all particularly noticeable on the bottom screen, which won’t be in an optimal viewing position unless you’ve got the device propped on an incline. The virtual keyboard is still very usable, but reading text just won’t happen... 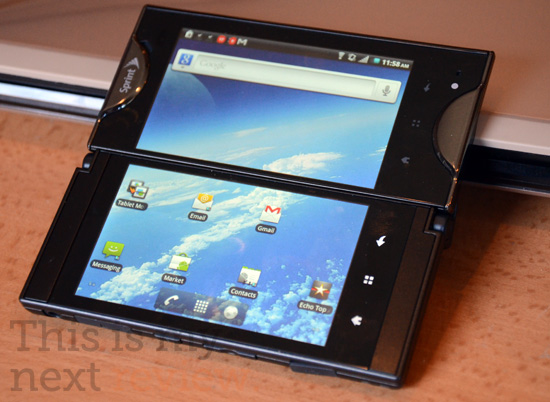 There’s not much to the Kyocera Echo’s single-screen mode—in this light, it’s just a bulky Android 2.2 phone with a 3.5-inch, 480 x 800 display and a 1GHz QSD8650 Snapdragon processor. It’s snappy, sure, but the competition is fierce in that form factor. No, Kyocera has placed its hopes on standing out with an altogether unique design. The screens actually stack facing the same direction, instead of sandwiched glass-to-glass. Opening to tablet is an altogether awkward process that involves flipping it open, swiveling the screens to both facing you, and locking it flat side-by-side to a 4.7-inch, 960 x 800 surface. The hinge itself feels decently sturdy, although everyone I showed it to all expressed concerned they’d break it. I’ve applied a good bit of pressure on a few occasions just to see if it’d bend or show strain—only slightly. You can choose to leave the top screen at a small incline, but then it’s not locked in, and I promise you’ll be spending most of your time accidentally (or maybe purposely) tapping the back and causing it to swing to and fro... 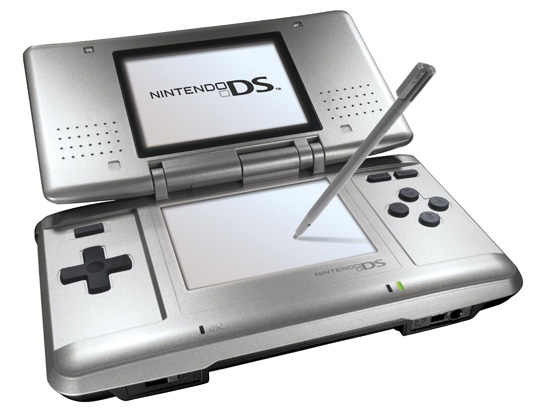 If there is a two-faced beacon of hope for this black sheep market segment, it’s Nintendo’s DS. The successor to the Game Boy launched in 2004 with much fanfare but games that critics said underutilized the additional display. The New York Times said it best in reviewing the launch titles:

"Most DS titles feel as though they were designed for Nintendo's Game Boy Advance, with the bottom screen used for something marginally useful, like a map, or for an option that could easily have been put elsewhere. The DS gimmick feels largely irrelevant in these games"

That sentiment, however, did nothing to deter gamers from buying the system en masse, and as of December 2010 it was on the cusp of breaking 150 million units sold, second only to the PlayStation 2.

So what worked? If you ask me—and you probably didn’t, but I’ll continue anyway—Nintendo benefited in two very strong and very important ways. First, there was solid legacy support. Consumers could pick up a DS and still use their Game Boy Advance flawlessly—it just worked, with the same buttons and no hiccup in performance. Second, it has a solid ecosystem of software software built from the ground up with the DS in mind. You can easily argue that a vast majority of releases were, in a word, garbage, and I’m not about to disagree. But there were numerous titles that went on to become successful both critically and financially. It helps, too, that Nintendo has a talented in-house team of developers and an assortment if iconic characters -- the company could lead by example and serve as flagship templates with its first-party lineups. It remains to be seen if the good fortune will continue with the 3DS

Wrap-up, or what lies in the shadow of the Courier

Both the Iconia and Echo were doomed to struggle from the get-go. For all the reasons I could think of to explain the DS’s good fortune, none of those exist with this pair. The success of the hardware is dependant upon its relation to the software, and here we have single-screen platforms jury-rigged to a design it was never intended for. The Echo at least benefits from an OS designed to work without physical input -- it’s an imperfect set up, sure, but it’s usable. Acer’s made it clear that it intends Iconia to be a series of products, so hopefully the next generation Touchbook isn’t an alpha build.

Look far enough into the future and you can start imagining a time where dual-screens—if they are ever to become a "thing"—be marginalized by gadgets built around flexible OLED panels. That’s great, but the above rules still apply.

If you believe in fairy tales, Microsoft’s Courier is best dual-screen computer ever conceived, with the biggest benefit being its complete lack of unattainability. Details and information leaked throughout the first half of 2010, and Microsoft later both confirmed and killed the project in the same breath. The concept videos and images presented brilliant use cases for a paper notebook replacement, with a UI / platform built for the form factor. Concepts that never had to withstand the scrutiny of the real world. Would it have fared well? Hard to say, but fair or not, that’s the intangible point to which all other similar devices will be compared.