As you may recall, back on the first "This is my next Podcast" Nilay and Josh got all giddy about running out and buying Verizon's first LTE mobile hotspot -- the Samsung 4G LTE Mobile Hotspot (or the SCH-LC11). Well, it turns out neither of them ever made it to the Verizon store -- they got preoccupied with writing a slew of reviews and explanatory articles -- but that's actually been a blessing in disguise since just this week Verizon released the Novatel 4G LTE Mobile Hotspot MiFi 4510L. Sure, both of the products are virtually the same -- you shell out $100 (after a $50 mail-in rebate) and sign up for a two-year contract and you get a gadget that lets you connect up to five devices to Verizon's blazing fast LTE network -- but there are some intrinsic differences, which ultimately make one better than the other. So, which one is the This is My Next team buying? Read on below as I put them through five ferocious rounds! 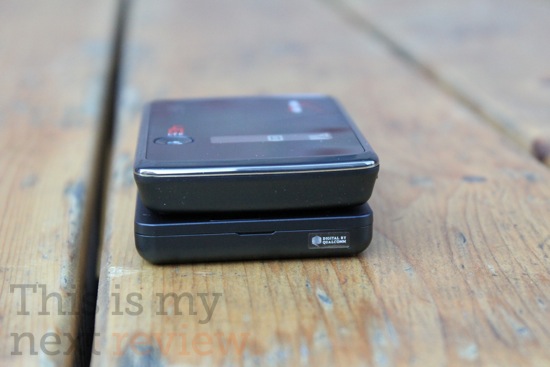 Personal hotspots have never been the most stunning gadgets on the block, but that's because they really don't have to be -- they're unassuming and hide in your bag or pocket. The Samsung and Novatel are really no different in that regard, but they're not devices you'd be embarrassed to leave out next to your frothy latte or turkey sandwich. The SCH-LC11 has a more minimalist look to it, with an all-black, soft-touch plastic shell and row of colorful LEDs, while the Novatel MiFi plays it with a more classic aesthetic and chrome border. Sadly, the Verizon Novatel isn't clad in a brushed grey plastic like the Sprint WiMAX version; instead, it gets a glossy black plastic exterior, which picks up loads of fingerprints. The E Ink display on the front of the device is obviously its killer feature, but more on that soon.

Sure, you're probably not going to buy one of these based on looks alone, but the size and weight of them could certainly be a factor. The 3.5 x 2.3 x .45-inch thick Samsung weighs just three ounces, and takes the prize for being the thinner of the two; the Novatel weighs a similar three ounces, though measures .53-inches thick. That difference in height isn’t huge, but the Samsung definitely laid more comfortably in my skinny jeans. Both devices have Micro USB ports for charging, but unfortunately, neither of them have microSD card slots, like the Sprint version, for sharing files.

Winner: Samsung. Its thinner body and cleaner aesthetic put the SCH-LC11 ahead in this round. Although, I should note that our resident mobile expert Chris "Fashionista" Ziegler prefers the look of the Novatel. 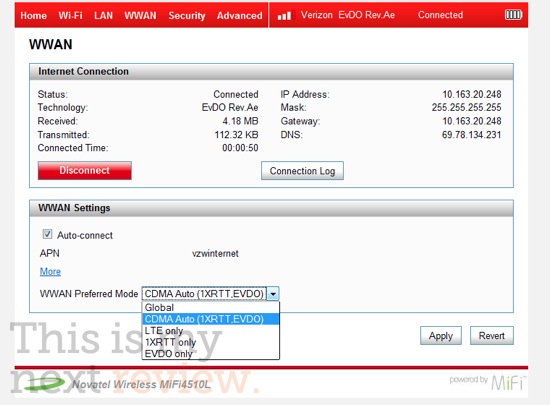 Both of these hotspots are insanely easy to set up. Press the power button, find the SSID in your network manager, punch in the pre-assigned password, and you’ve got LTE! (Well, if you’re in one of Verizon’s coverage spots.) However, while the process is simple, I did find that the Novatel took slightly longer than the Samsung to boot and acquire a 4G signal. The Novatel took an average of 45 seconds while the Samsung about 33 -- not a huge difference, but for us, those seconds are important when breaking news on the road.

You can change the settings in your browser while connected. Both the Samsung and Novatel interfaces allow you to change the password, SSID name, and a host of other details. You'll log into the Samsung more often since it's the only location you can see the battery life and signal strength, but we’ll be getting to that in a moment.

Winner: Tie! The Samsung may boot slightly faster, but both of these are really identical when it comes to setup and configuration.

Round 3: Signal and battery indicators 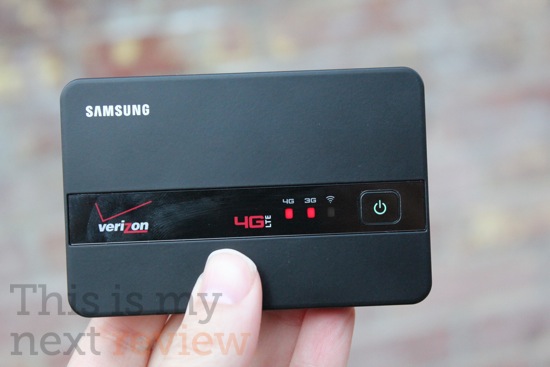 It's in this round where these two differ the most, and while indicators may seem like small potatoes, they're far from it on this sort of device. Believe me, when you're liveblogging an event, you want to know how much battery you've got left and what the signal is like as quickly as possible, and Samsung makes telling those things extremely difficult. The LED power button and three additional indicators on the front of the device -- there's one for 4G, 3G, and WiFi broadcasting -- require you to memorize a slew of color combinations. For instance, if the 4G or 3G signal is strong the respective LEDs maintain a green light, while if it's weak, it will turn a yellowish green. Roaming on either of those? You get a blinking green and yellow light. It's the same sort of deal with the battery indicator. If your battery is low, the power button will turn yellow and then finally red when you’re getting into the five percent danger zone. In all seriousness, I'm not sure why this thing didn't ship with a color wheel on the back cover -- although to Verizon or Samsung’s credit, there’s a handy chart in the user manual. As I previously mentioned, the only way to get specifics about the signal strength or battery is to log into the web settings portal.

Sure, I got used to knowing what each color meant, but the Novatel's E Ink screen prevented me from having to exert that sort of brain power. The display has a series of indicators, including a more precise battery meter, which indicates how much juice is left with a range of four bars, and a signal strength meter. The signal indicator is particularly useful -- I didn’t have to boot up my computer to tell if there was a decent 4G signal in the back of my local coffee shop. However, the Novatel still relies on an LED light on the edge to tell you what network it's connected to -- a solid green light means you're rolling on LTE, the violet means 3G. It would have been handy if 3G / 4G signs were provided on the display, but regardless, the E Ink indicators are extremely helpful. My only issue with the display is that it’s hard to see in dim environments -- this could be a potential issue at romantically lit press events.

Winner: Novatel. There's no question about it, the MiFi 4510L takes the cake here with its E Ink display and easily glanceable indicators.

In this category the two were pretty much neck and neck. In my testing around New York City, the two provided incredibly fast speeds. On Speedtest.net, both the devices averaged between 14 and 17Mbps on the downlink and around 5Mbps on the uplink. Below is a more detailed comparisons, but I can confidently say, that LTE is faster than my insanely crappy home Time Warner Cable connection. (Note: my apartment connection is really, really slow!) 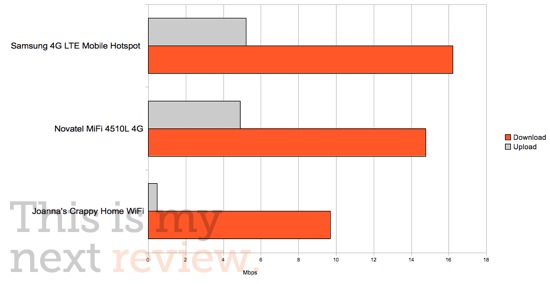 However, like some others out there, I noticed that the Samsung would lose connectivity periodically, even though the device indicated that the signal was strong. Verizon's looking into what looks like some sort of signal stalling, but I’m still seeing the issue on my review unit.

In addition to LTE, both pack 1xRTT and EV-DO to fall back on when the speedier network is unavailable. I actually only fell back on 3G once while using the Samsung in the last week  (thankfully, LTE is fairly ubiquitous in midtown Manhattan), and while the transition between networks was smooth, my one complaint with the Samsung is that there's no manual way to switch between the radios to either save battery life or just force one network instead of another. The Novatel allows you to do that in its web portal.

Winner: Novatel. Even though the wireless LTE speeds are roughly the same here, Novatel takes another round with its steady connection and ability to manually switch between networks. 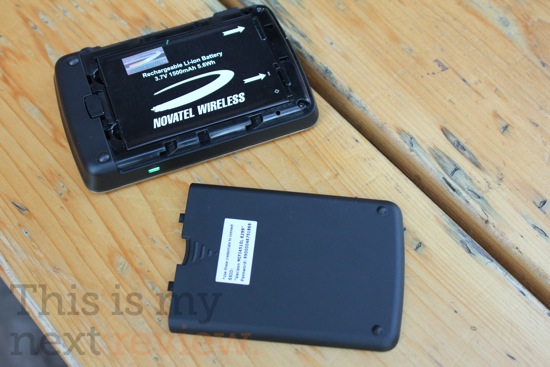 Both devices pack 1500mAh, 5.6Wh batteries, which makes their runtime almost exactly the same. When connected to the HP Pavilion dm1z, the Novatel lasted two hours and 57 minutes while looping a movie on Hulu. Connected to the same laptop, the Samsung lasted three hours and five minutes. Both times are pretty shoddy compared to 3G hotspots, which typically run closer to five hours, and while you can pick up spare batteries and swap 'em out, you'll probably be more inclined to carry the charging cable around. (Samsung will apparently offer an extended battery for about $50.)  Speaking of cables, both can be used while being charged through a wall outlet; however, while the Samsung will let you connect while charging via a laptop, the Novatel doesn't have that feature just yet. Verizon promises an update for the latter very soon.

My biggest question about these hotspots was actually heat. I know, it seems like an odd thing to worry about, but my MiFi 2200 gets incredibly warm during heavy use -- it’s gotten to the point where it’s uncomfortable to keep in a pocket at trade shows. The good news is that neither of these devices get that hot, they can get warm, but it's not going to double as a hand warmer.

Winner: Tie! The battery life on both of these isn’t great, but at least you can use them both while charging them up. 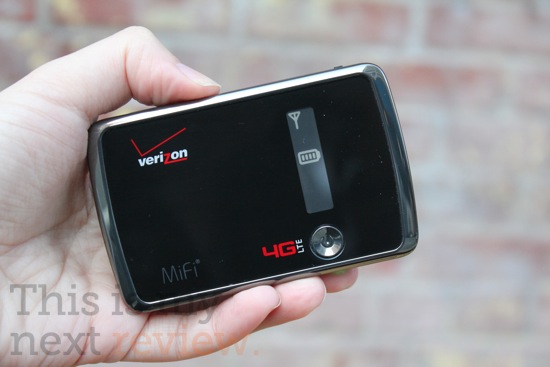 They say everything happens for a reason, and I’m going to say there was just some larger force that kept Nilay and Josh from snatching up the Samsung Mobile Hotspot a few weeks ago. While the Samsung took the design round and tied with the Novatel in setup and battery life, the Novatel MiFi is clearly the stronger mobile LTE option with its clearer status indicators, constant LTE signal, and ability to manual switch between 3G and 4G networks. The Samsung may be thinner, slightly more attractive, and have the ability to broadcast a signal when plugged into a laptop, but it's pretty much a no-brainer -- once my colleagues take a break from writing and podcasting, we're all taking a field trip to Verizon to get ourselves a few Novatel MiFi LTE 4510Ls.

No detailed status indicators
Battery life could be better

7.0 Verge Score
Most Popular
From our sponsor
Advertiser Content From