AT&T and T-Mobile USA: the case against a merger

AT&T and T-Mobile USA: the case against a merger

In his support of AT&T’s $39 billion acquisition of T-Mobile USA from Deutsche Telekom, my colleague Nilay Patel makes an interesting case: though he acknowledges that AT&T’s public interest filing with the FCC is as much smoke and mirrors as it is substance, he argues the merger has the potential to unify compatible spectrum in an open, fair way that encourages manufacturer participation and shifts control from operators to consumers.

From a technical perspective, I can’t argue that it’s not an exciting vision -- the simple pleasure of buying an unlocked, unbranded device from the retailer of your choice and moving it at will between network operators A and B (in this case, AT&T and Verizon) is a pro-consumer panacea. Thing is, it’s a panacea that we’ve been trying and largely failing to achieve for the past decade thanks to a variety of entrenched political, economic, procedural, and philosophical roadblocks. I don’t see any reason to believe that a merger that eliminates a key competitor and brings AT&T over 2,000 additional active FCC licenses and 34 million customers is going to open the market to it now.

The success of this plan hinges on a flawed foundation, which is that Americans are willing to pay $500 for their phones as a matter of course. They're not. American carriers have trained us far too well into believing that a cheap phone should be free, and an awesome phone should generally be $150 to $250.

So who blinks first? Carriers aren't about to remove subsidies from the devices they sell directly, of course -- contracts and cheap hardware are key to keeping churn low from quarter to quarter. Manufacturers sporadically try to rage against the machine by offering their own pure, clean devices outside the carrier ecosystem, and they do so with very little success; Nokia has a handful of shuttered brick-and-mortar stores (and minimal branded carrier presence in the US) to show for it. You could argue that a less competitive wireless landscape curtails the motivation for carriers to penalize manufacturers that sell independently, but if you ask me, that's backwards: you still need to allow the hardened duopoly just to get there.

Evolution of a duopoly

Here's a rough picture of the competitive landscape, by subscriber count, in the American wireless market as it stands today: 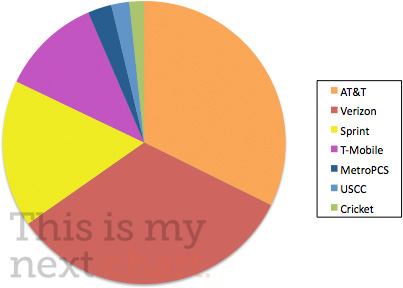 Let’s assume for a moment that the FCC and FTC have gotten to the point where they’ve green-lighted the acquisition with few enough divestitures so that AT&T hasn’t soured on it. That'd leave the combined firm with something on the order of 129 million subscribers, compared to Verizon's 98 million and Sprint's also-ran 50 million: 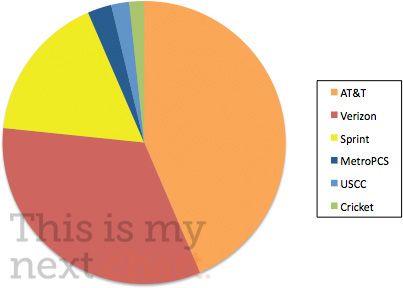 Even if Sprint were to go all-out and purchase the next three largest players -- MetroPCS, US Cellular, and Leap Wireless (which markets under the Cricket brand) -- they'd only end up with somewhere around 53.5 percent the subscriber count of AT&T. Let's say, for the sake of argument, that they could get to 60 percent by way of merger divestitures. (Of course, this is all assuming they're able to pony up the cash, stock, and government approvals to make all of these deals happen in a timely fashion before Verizon swoops in and makes something happen.)

Any way you slice it, you're dealing with Sprint's RC Cola to AT&T's Coke and Verizon's Pepsi. That's fine for a carrier that specializes in value customers or rural areas -- dozens of smaller carriers peppered around the country survive on those markets -- but for a generalist like Sprint that wants to play in the same ARPU arena as its much larger competitors, that's a big problem. Already playing from a weakened position, Sprint would be dealing with its worst-ever disadvantages in economies of scale for customer and infrastructure hardware purchases. Oh, and let's not forget that Sprint -- like T-Mobile today -- pays AT&T and Verizon for a significant percentage of its backhaul. Barring major regulation, those backhaul connections certainly aren't going to get any cheaper post-merger. 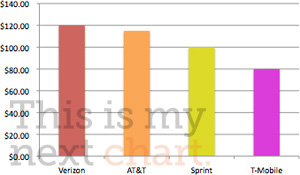 And that brings me to my point: I believe that a duopoly of this magnitude and of this level of significance to the public well-being can only work in the face of a heavy regulatory hand and constant scrutiny. The chart on the right shows a comparison of unlimited voice, text, and data plan pricing on the four major networks as they stand today (except for AT&T, which doesn't offer unlimited data). It's not a coincidence that AT&T and Verizon are off in their own playground, just $5 apart, while Sprint and T-Mobile are playing in the sub-$100 space. Neither of the larger operators are going to engage in a shareholder-bruising price war simply because the duopoly is getting stronger post-merger. If Verizon believed otherwise, it wouldn't be projecting an attitude of complete ambivalence to the proposal.

The FCC can't (or won't) herd these cats

And again, Nilay's argument is that this can work with appropriate regulation. I don't believe that's possible. The FCC and Congress have a tendency to get mired in inaction on hot-button topics that are accompanied by heavy lobby activity: just look at the $350 and $325 smartphone ETFs that Verizon and AT&T levy, respectively -- well above the $200 that Sprint and T-Mobile charge -- which have gone unregulated despite intense scrutiny and complaints from specific commissioners. Inconsistencies in SIM locking policies and proposed laws surrounding handset exclusives have been waved through Washington for even longer, and we're still miles from making progress. What's more, the FCC's open-ended, almost meaningless language surrounding net neutrality exemptions for wireless broadband suggest to me that the current administration has no intention of taking a hard line on anything.

And more directly to the points being made in the merger filing, no one’s arguing the veracity of AT&T’s spectrum synergy claims -- but this isn't about cell splits or control channel efficiencies. Let's assume that we're as close to spectrum exhaustion as AT&T alleges (we don't have specific dates, because they're redacted from the public version of the filing). For 3G -- which is still plenty fast, has lots of room to grow with HSPA+, and is almost completely absent from AT&T's rural coverage areas -- the company could accelerate decommissioning of its 2G footprint and offer to subsidize upgrades of remaining 2G handsets and M2M modules for far, far less than $39 billion. Boom, instant buckets of 850 / 1900 spectrum.

And we can extend that argument to 4G, too. By AT&T's own admission, the decision to stop LTE at 80 percent population coverage was a business one, not a logistical one: "senior management concluded that an 80% build was the limit [their] company could justify to [their] shareholders." If it wanted rural LTE markets in which it doesn't currently own 700MHz or AWS spectrum, it could approach current owners -- owners like EchoStar, who've yet to do anything with their licenses -- and make aggressive buyout or roaming offers, just as it has done with Qualcomm's decommissioned FLO TV spectrum. The answer to AT&T's problems certainly doesn't lie with an acquisition alone.

Even if Deutsche Telekom doesn't want to be involved, I suspect T-Mobile USA could be taken private and primed for an IPO with the intention of keeping it independent and competitive; the carrier's 3G (what they call "4G") roadmap is rock-solid, after all, and there are at least two potential LTE wholesalers in the game that would be happy to count T-Mobile as a customer. But failing that, a T-Mobile / Sprint merger could be a beautiful thing that would take the combined company within spitting distance of Verizon's and AT&T's respective subscriber counts. 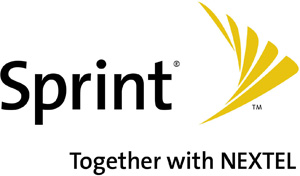 You might argue that the technology and spectrum discrepancies would doom it to the same painful fate as Sprint's "failed" Nextel buy, but I don't agree: I think it was a fundamental difference between the CDMA and iDEN markets and target demographics that brought Sprint Nextel to the verge of implosion, not technology. Just look to Canada for a prime example of how quickly and efficiently committed carriers can switch network technologies -- and on the 4G side, both Sprint and Clearwire have signaled in recent years that moving from WiMAX to LTE wouldn't be a problem. I'm just spitballing here, but given the timeline for the iDEN sunset, the combined company could split LTE between 800 and 2500MHz and transition 1900MHz to UMTS. (There are, of course, a few plausible spectrum utilization scenarios, but you get the idea.)

I'm not delusional: I think AT&T's immense lobbying power (combined with the FCC's general lack of interest in rocking the corporate boat) will get this jammed through. I do, however, think that there'll be major divestitures involved -- and it'll ultimately be a question of whether AT&T and Deutsche Telekom are comfortable with those requirements. Either way, Sprint, consumers, and the rest of the wireless industry need to be prepared for a radically-reshaped competitive landscape.

More from this stream AT&T's dead T-Mobile takeover: from beginning to end