It was more or less inevitable that Samsung would respond to Apple's patent and trademark lawsuit with a lawsuit of its own, and here we are: Sammy filed a complaint in the Northern District of California yesterday, alleging 10 counts of patent infringement against Apple. Seven of the patents are to do with UMTS / W-CDMA 3G cellular communications, and the remaining three cover various UI elements -- we'll step through them in detail below.

One interesting note about Samsung's response: this complaint is a standalone that doesn't include the reply to Apple's lawsuit. It's not required for the reply and countersuit to be bundled up, but it's telling that Samsung was prepared to hit back with four patent lawsuits in four countries within a week of Apple's initial filing. Tim Cook said the Apple and Samsung talked about their issues "for some time" before Apple went to the courts, so it's likely Samsung's attorneys have been gearing up for litigation for a while now. (Oddly, it doesn't appear that anyone's actually seen the filings Samsung claims to have made in Korea, Japan, and Germany, so those are still rather mysterious.) The real fireworks will come when Samsung files its reply to Apple's complaint, which should happen sometime soon -- I'd expect the court to then consolidate these two proceedings into one.

Okay, all that said -- grab a copy of the complaint and let's break down what Samsung's claiming in this lawsuit, shall we?

Samsung mostly spends the introduction and background section of the complaint talking about how awesome it is, but there are a couple interesting tidbits. First, Samsung spent $35 billion on R&D from 2005 to 2010, which contributed to a sizable patent portfolio: 28,700 US patents, 4,551 of which were issued in 2010. Oh, and 5,933 of those patents are related to telecommunications. That's about right considering Samsung is the second-largest phone maker in the world, but it also means that Samsung had a sizable selection of potential claims to pick from when formulating this lawsuit -- and it picked just these 10. Let's look at them in order -- the UMTS / W-CMDA patents come first, and then the UI patents. 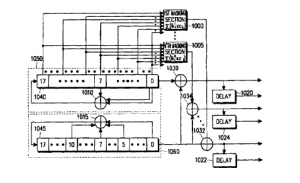 U.S. Patent #7,200,792, Interleaving Apparatus and Method for Symbol Mapping in an HSDPA Mobile Communication System, is... well, it looks like it's for quickly writing a data stream in a systematic way using something called a "turbo encoder," which sounds awesome.

U.S. Patent #7,386,001, Apparatus and Method for Channel Coding and Multiplexing in CDMA Communication System, covers taking multiple data frames that are received out of order across multiple channels and putting them back together efficiently.

US Patent #7,050,410, Apparatus and Method for Controlling a Demultiplexer and a Multiplexer Used for Rate Matching in a Mobile Communication System, covers a transmitter that encodes an input stream into three interleaved streams that are then broken up into different radio frames.

U.S. Patent #6,928,604 Turbo Encoding/Decoding Device and Method for Processing Frame Data According to QOS, has what is clearly the best name of all the claimed patents. ("Turbo" definitely needs to come back as a word. Galaxy S Turbo -- think about it, Samsung.) Anyway, this one covers taking data frames of variable sizes and combining them into a "super frame" that can then be turbo encoded.

Okay, those are the seven super-wonky UMTS / W-CDMA patents. It's extremely notable that Samsung doesn't indicate whether any of these patents are essential to the UMTS or W-CDMA standards -- if they are, Samsung is bound by its membership in the 3GPP standards body to license them under "fair, reasonable, and non-discriminatory" (or FRAND) terms. (That's the fight Apple is in with Nokia, if you'll recall.) If these patents aren't essential to UMTS or W-CDMA -- if they're just improvements on the standard, for instance -- then Samsung has to prove the the iPhone makes use of the patented technologies, which won't be an easy road. Look for the big first question with these patents to be focused on whether or not they're essential.

The next three are UI patents, so they're a little easier to understand. 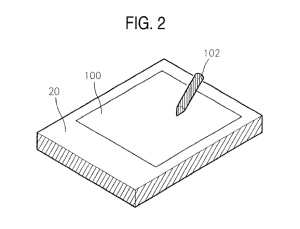 U.S. Patent #6,292,179, Software Keyboard System Using Trace of Stylus on a Touch Screen and Method for Recognizing Key Code Using the Same, is the first UI patent, covering software keyboard functionality. Interestingly, it specifically requires that the keys be "pressed by a stylus," which makes it an odd choice for inclusion here -- at some point Samsung will undoubtedly have to argue that a user's finger is equivalent to a stylus.

U.S. Patent #7,009,626, Systems and Methods for Generating Visual Representations of Graphical Data and Digital Document Processing, covers displaying a low-resolution image preview while the full-resolution images loads in the background -- think zooming and panning in the iOS Maps app.

U.S. Patent #7,069,055 Mobile Telephone Capable of Displaying World Time and Method for Controlling the Same, is a patent on calculating time in multiple cities based on a reference time signal sent from a remote system and the local time of the device. Yes, seriously.

So there you have it -- Samsung's opening volley of patent counterclaims against Apple. All in all, it's fairly anti-climatic compared to Apple's filing, especially since it's hard to evaluate the UMTS / W-CDMA claims without knowing if Samsung considers those patents essential to the standards. Similarly, it's hard to get a feel for the UI patents at this stage -- they're all very broadly worded, which is usually a good thing, but you'd like to see something stronger than stylus-driven keyboards and world clocks here. We'll see if Samsung's faith in these three patents over the thousands of other UI patents it undoubtedly has in its portfolio is warranted over time. And soon we'll get Samsung's actual reply to Apple's complaint, which should be very interesting -- stay tuned.