An Android phone made especially for women. It's an odd sentence to write, but believe it or not, that's exactly what we're hearing HTC has up its sleeve. According to a source, the company is holding focus groups with women in their 20s and 30s around the country to get their take on a brand new device that will hit Verizon before the end of the year. And no, it's not just a pink Incredible 2 -- it's going to have a slew of rather interesting female-targeted features. Hit the break for a look at what we know so far.

Note: That is not a real picture of the device -- it's just our mockup based on the information we've been told.

The phone is codenamed the Bliss, although it may be called something else by the time it hits the market. (Heck, HTC may decide the Estrogen has a certain ring to it!) As you can see in the mockup above, it will be a greenish hue -- we are told it's somewhere between a forest and sea green and the color was selected for its "calming" effect. Our source was shown a few mockups, but each of them had a greenish-gray rubber back so "women can have a better grip of the phone."

We are told that the slate looks like a typical HTC device and that if "the Desire S and the Desire Z were to mate" you'd get the Bliss, although there's no keyboard here. Our source estimated that it was about half a centimeter thinner than the Desire Z, which would make it around .54-inches thick. There's a camera on the back, but there was no mention of a front-facing shooter.

We don't know much about what version of Android this will be running, but our source did tell us that the mockups had shopping comparison and calorie counting apps -- you know, because every woman watches the pounds. We also heard that "calming" adjective used to describe the wallpaper. No word on if it will run Sense, but we're thinking HTC would probably want to keep its trademark skin in tact on a device like this. 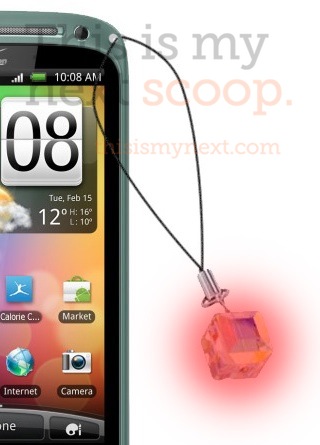 The most interesting part comes with the accessories. First up is a wireless charging dock with built-in speakers. The phone apparently switches to alarm mode when you set it down on the charging pad. Speaking of speakers, there will also be a square-shaped speaker that attaches to a car visor and supports voice recognition. There will also be a "stylish" matching Bluetooth headset available.

The last accessory is certainty the most interesting. It's said to be called the "charm indicator" and the cube-shaped device comes with a hook for attaching to a purse or bag. As we tried to show in the image, it lights up to notify you when you've got a new message or missed call. We expected this to pair wirelessly with the phone, however, we are told that it attaches to phone with a cord -- apparently, the cord also makes it easier for women to fish the phone out of that deep purse. It sounds like a pretty crazy idea, but one that actually makes a bit of sense for those that constantly lose their phone in their bag and want to easily see if they have a new message.

We reached out to HTC and Verizon about the Bliss, but neither would comment on any future devices.

To be honest, we've had a really hard time believing some of this information -- not because there's anything here that's technically impossible or because we didn't trust our source, but because we simply can't imagine a company creating a phone specifically for American women in this day and age (it reminds us of the Petticoat 5 spoof). That said, HTC has been trying extremely hard to differentiate its handsets (see: Salsa and ChaCha) and we can see both Verizon and Google trying to distance Android from its somewhat masculine image. Of course, the companies are wisely testing this with loads of women at the moment, which ultimately means that there's a good chance the Bliss may look completely different when it hits or that it could be killed altogether because of bad reaction. Regardless, we do know that the Bliss is being tested with consumers and that HTC and Verizon are, for better or worse, thinking seriously hard about how to aim Android at females.