Haven't had your fill of Samsung news in the past few weeks? Well, it's pretty safe to assume there's plenty more on the way given the amount of Samsung event invites we've received in the past few days. First up is a joint Samsung and AT&T shindig being held tomorrow evening in NYC (invite to this one after the break). All signs point to that being the official unveiling of the AT&T Infuse 4G, but we should know the answer to that one within 48 hours.

Next up, we're invited to an event on May 11th in San Fransisco, which will immediately follow the conclusion of Google I/O.  Samsung is keeping pretty tight lipped on this one, but since it was sent over by a contact at Samsung's PC / laptop division, we have to assume this one is going to be closely related to that rumored Chrome OS Alex netbook. The invite also hints that it will be a "night of firsts!"

Last but not least is the May 24th invite above, which we just received a few hours ago. Again the details are sparse, but we have a feeling this could be tablet focused since we last heard Sammy would be bringing its Galaxy Tab 8.9 and 10.1 to market in the the early summer. The WiFi version of the 10.1 was said to hit on June 8th, so this may be a real unveil with working demo units and perhaps some carrier announcements. Of course, it could be yet another Galaxy phone or maybe the US availability of the Galaxy S WiFi 4.0 and 5.0. It's pretty insane to think that a single company is about to hold three events in one month for different products,  but considering two of these were dependent on others -- AT&T and Google -- we assume Samsung wasn't left with much of a choice in the end. Either way, our calendars are packed! 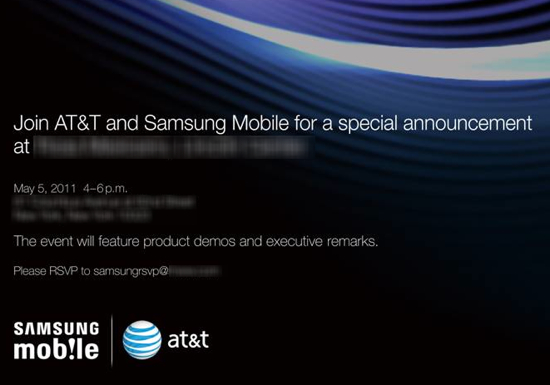