Earlier this week, Research In Motion held its annual, major event -- BlackBerry World -- and made a handful of announcements about where the company was headed. The first wasn't entirely a surprise; RIM introduced the latest in a line of handsome -- if utilitarian -- smartphones, dubbed the Bold 9900. The device is an attractive, powerful handset that puts the classic BlackBerry QWERTY keyboard alongside a high-res capacitive touchscreen. The Canadian phonemaker also brought Microsoft's Steve Ballmer on stage to tout Bing as the default maps and search engine in future BlackBerry products, and gush about investments the company was making in RIM's enterprise infrastructure. But the real shocker this week wasn't new phones or Microsoft collaboration. It was the news that RIM would be zig-zagging into an entirely new OS version -- OS 7.

For many companies, this might seem like good news, but I don't think that's the case here. Based on the announcements, I feel more strongly than ever that RIM has lost not only its map but the compass as well, and may have let the sea carry it too far and too fast. Keep reading, and I'll explain why.

Let's tackle the big problem first, the elephant in the room... the new OS. Now, RIM's been down this road recently, having announced a major update to its OS little more than a year ago -- OS 6. Remember, just a few months after the OS 6 announcement in 2010, the BlackBerry Torch was announced. That phone was meant to be the company's Trojan Horse -- it would bring the new operating system to the masses. If you'll recall, the Torch was launched to much fanfare; the company shared a press event with AT&T to detail the device, and seeded review units to many critics. It also went on a marketing blitz to stoke excitement over this next stage in the BlackBerry brand evolution. And this was all just nine months ago.

Then the reviews dropped, and they weren't good. The phone was sluggish, underpowered, third-party apps were scant or not entirely compatible, the new OS wasn't quite new enough. In short, the Torch didn't make a spark, let alone catch fire. OS 6 faltered too, perhaps because of the phone it had been introduced with, but more likely because it was evolutionary in all the worst ways. The UI still clung to its non-touch roots, bogging down the experience with unnecessary menus and duplicated actions; the social networking integration was clumsily handled; its browser -- while much, much better than earlier versions -- still paled in comparison to the Android, iOS, or webOS experiences. Basically, it wasn't very good.

In the months following, a series of leaks made it clear that something else was on the horizon from RIM -- a tablet. Suddenly the PlayBook burst into being, touting a brand new OS built on a new partnership with QNX. QNX was a recent RIM acquisition -- a company that makes the systems that keep computers at the electric company working and trains running on time. A rock solid base for the future of the company. The way forward. But RIM didn't stop there -- the company turned around and purchased TAT, an inventive UI design firm that created the user experience for the original Android OS and did countless, imaginative makeovers for monoliths just like the Canadian phonemaker.

Naturally, out came the PlayBook reviews, and boy did they sound familiar. This was the Torch in tablet form -- too little, and maybe not too late, but not enough and not enough right now. The PlayBook received a lukewarm reception at best, and from what I've heard, sales haven't exactly been brisk.

Why have I given this brief history lesson? Simple -- in the past year, RIM has introduced two new operating systems, neither of which is compatible with the other, nor are they wholly compatible with previous generations of BlackBerry software. Now they're about to make that mistake again... and that brings us to BlackBerry World 2011, the Bold 9900, and OS 7.

So just what is OS 7? It's not the PlayBook's QNX-based operating system (the two won't be compatible), and it isn't exactly backwards-compatible with the just released OS 6 and its devices. OS 7 is, however, a new fork of that OS, obviously streamlined and cleaned up for a new generation of CPUs (sporting the company's new "Liquid Graphics"). What was supposed to be called 6.1 or 6.5 has become a full-fledged revamp. Again, on launch day RIM told the press that OS 7 would not be coming to older devices -- including the just-released and heavily promoted Torch. Even in the fast-moving world of tech, obsoleting your flagship device after just nine months feels fast (then again, maybe RIM feels like I did -- that the Torch was obsolete at launch). But how is that supposed to feel to the loyal customers to whom it's been shilling this device? Unfortunately, it seems that in one fell swoop RIM has made what was already a dim picture for developers and users darker still. The company manages to alienate fans and pour quicksand on its third parties -- and it almost feels like an afterthought.

If you're a developer writing software for the BlackBerry line, you need to support OS 5 legacy devices (certainly the majority of phones in market right now), upgraded OS 6 phones and the Torch, the PlayBook's BlackBerry Tablet OS, and now OS 7. And this doesn't even take into account the fact that RIM will soon offer an option to submit Android applications to its App World for use on the PlayBook. And it's not just version numbers; between the OSs, developers need to decide between creating apps in Java, C++ (native), Adobe Air, Webworks (RIM's webOS-like web app SDK), and now Android. Confusing? To say the least.

But it gets better -- reports have circulated (and these are ballasted by CEO Mike Lazaridis' own remarks) that the real goal for BlackBerry smartphones is to reach OS parity with the PlayBook. Meaning that by this time next year, even OS 7 could feel like a lot of wasted breath.

The whole situation feels eerily reminiscent of where Microsoft was two years ago when the company launched Windows Mobile 6.5. It was clearly a stop-gap, and despite best efforts, the public response was awful. Microsoft "missed a cycle" then, and RIM is missing a cycle now. But in 2011, it's more like RIM is missing two cycles -- the release of OS 6 was certainly one step behind the competition. That means that RIM has to claw its way back into the good graces of an audience that is quickly moving to other, more advanced platforms. According to comScore, BlackBerry OS dipped in US marketshare from 42.1 percent to 28.9 percent from February 2010 to February 2011. How will those numbers look next year as Android takes the lead and Apple has started to chisel away at Verizon BlackBerry owners with the freshly minted CDMA iPhone? Sure, RIM has hinted that the future includes a major play for emerging markets, but we've heard that story before and it didn't work out too well. 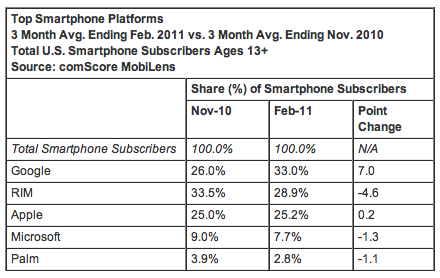 RIM seems to have two distinct problems: the first is that it doesn't seem to adapt quickly to a changing market, and the second is that when it finally does make a move, the results too often feel half baked. The company and its leaders seem almost indignant about the fact that they no longer lead in a field which they clearly feel they created. The unfortunate reality for RIM is that it's in the process of trading first place for third, and in an increasingly crowded market, it's not battling to win, it's battling to stay alive. The real parallel here is Nokia. The legacy devices and OS (even OS 7) -- the old ways of doing business -- are Waterloo's "burning platform." But will the users and developers be there when it finally takes the plunge?