Sprint's battle to stop AT&T's proposed merger with T-Mobile USA dead in its tracks is officially at a fever pitch ahead of next Wednesday's congressional hearing on the matter -- the first of likely many over the next several months. Evidence of the battle was taken to the consumer front lines today with print ads that apparently ran in a number of newspapers and journals, with Sprint's touting the value of competition in an almost poetry-like 24 lines of text. Interestingly, the ad ends without ever mentioning AT&T, T-Mobile, or the merger directly, though the jab is obvious in one key line: "Competition keeps us all from returning to a Ma Bell-like, sorry-but-you-have-no-choice past." Of course, "Ma Bell" is a not-so-veiled reference to the monolithic AT&T that controlled virtually all of the nation's telecom industry prior to a government breakup in 1984.

For its part, AT&T counters with this: 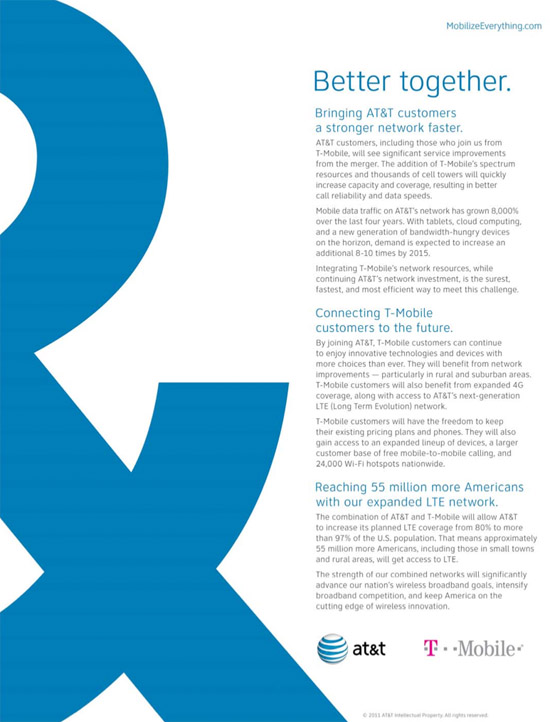 The ad is a little hard to read when you're not looking at it on an entire newspaper page, so here's the text in full:

AT&T customers, including those who join us from T-Mobile, will see significant service improvements from the merger. The addition of T-Mobile's spectrum resources and thousands of cell towers will quickly increase capacity and coverage, resulting in better call reliability and data speeds.

Mobile data traffic on AT&T's network has grown 8,000% over the last four years. With tablets, cloud computing, and a new generation of bandwidth-hungry devices on the horizon, demand is expected to increase an additional 8-10 times by 2015.

Integrating T-Mobile's network resources, while continuing AT&T's network investment, is the surest, fastest, and most efficient way to meet this challenge.

Connecting T-Mobile customers to the future.

By joining AT&T, T-Mobile customers can continue to enjoy innovative technologies and devices with more choices than ever. They will benefit from network improvements -- particularly in rural and suburban areas. T-Mobile customers will also benefit from expanded 4G coverage, along with access to AT&T's next-generation LTE (Long Term Evolution) network.

T-Mobile customers will have the freedom to keep their existing pricing plans and phones. They will also gain access to an expanded lineup of devices, a larger customer base of free mobile-to-mobile calling, and 24,000 Wi-Fi hotspots nationwide.

The combination of AT&T and T-Mobile will allow AT&T to increase its planned LTE coverage from 80% to more than 97% of the U.S. population. That means approximately 55 million more Americans, including those in small towns and rural areas, will get access to LTE.

The strength of our combined networks will significantly advance our nation's wireless broadband goals, intensify broadband competition, and keep America on the cutting edge of wireless innovation."

Needless to say, this isn't the last we've heard from these guys; stay tuned for some fireworks down in Washington next week.