Google Music may be ready for its debut, but is it more of the same old cloud?

Google Music may be ready for its debut, but is it more of the same old cloud?

I've been using all-you-can-eat music services before the term "cloud" was entirely popularized. I was originally a Rhapsody man (great recommendations!), then I fell for Zune (beautiful UI!), and then last year I was wooed by the excellent MOG (good bitrates in a web player!). I thought I'd finally found my soulmate. And then, at CES 2011, Justin Glow (a developer and a great human being) leaned over and asked if I'd tried Rdio. Before I could even mumble a Paul Miller-style response about doing the limited trial and liking the UI and some of the social services but finding gaps in the library that MOG had filled and was the bitrate even as good as MOG I'm not sure, almost everybody I knew was on Rdio and loving it.

See, unlimited streaming services are the fickle consumer's friend. When you don't own anything, there's no lock-in. If somebody came along with a competitor to Netflix that worked with my Xbox, had more movies, and which didn't keep trying to make me watch the low-res Starz version of Prince of Persia, I'd be there in an instant. And I love Netflix. Because what would I lose? Sure, Netflix has a pretty detailed history of my movie watching habits, and was even pretty good at suggesting stuff I should watch -- before my sister moved in with me and started watching BBC historical dramas all the time. But that's it. Netflix doesn't own me. It's not the boss of me. And neither was MOG. 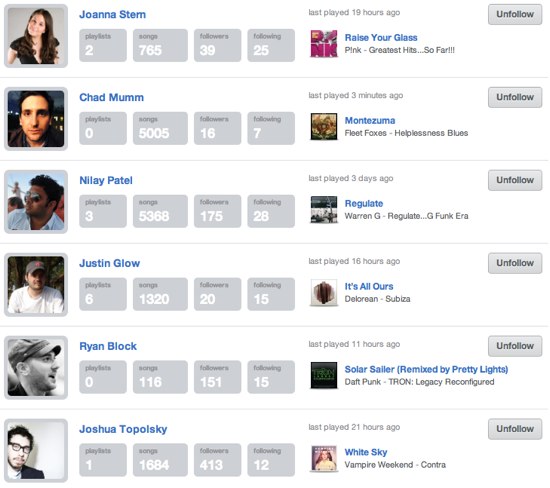 I jumped over to Rdio and didn't look back. Sure, I left behind some playlist orphans, like always (although, some playlists were meant to be forgotten -- like that ode to the Killers I built on Rhapsody in some long-forgotten decade), but I gained a community of fellow music lovers that I actually already knew. Rdio, thanks to its social features, is pretty much responsible for every great new (or new to me) album I've listened to this year. I owe it so much. I love it unconditionally. Nothing can come between us. Outside of something better, of course.

And the word on the street is that something better might very well be on the horizon. Google is due to launch Google Music at Google I/O this week. This long awaited service will, according to what source you want to believe, involve unlimited subscription music (à la Rdio), a music locker (à la Amazon Cloud Player), over-the-air iTunes library syncing (à la Nutsie), over-the-air iTunes library streaming (à la Didiom), and cooking breakfast (à la your mom). 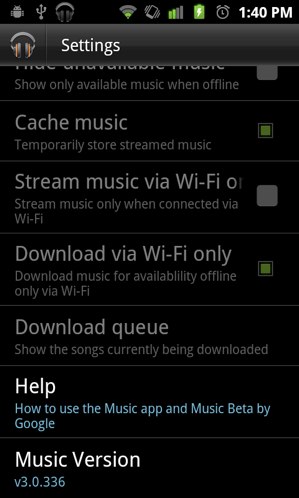 Based on leaked screenshots of the actual app that will be privy to all this magic, it's clear that there is some sort of cloud component, and that tracks can be streamed to the device, downloaded to the device, and some combination thereof -- which puts it on par with streaming services like Rdio and MOG, but with an extra bit of Google-style customizability. Also, at Google I/O last year, Google demonstrated the ability to purchase songs in a web store and push them straight to your device (just like how over-the-air app purchases work on Android), along with that iTunes library streaming functionality I mentioned -- so those sound like a lock. Finally, Google recently launched its One Pass payment system for subscription services, and what better way to "dogfood" the service than to launch its own subscription music platform on top of it?

What really excites me about some of these features, if done right, is that they could really mark a next step for cloud music services. See, back in my Rhapsody and Zune days I was pretty much stuck in front of my desktop app. On the go I mostly used my iPod in tandem with a quickly aging iTunes library. The thing was, I could at least pull the DRM-free songs in my iTunes into the desktop player and mix and match old stuff I really owned with these hip new tunes I was renting from The Man. Unfortunately, my current Rdio setup allows for none of this. I'm either in my Rdio browser window or in my iTunes app. On my device I'm either in the Rdio app or the iPod app. Rdio can sync with my iTunes library, but only songs that are in Rdio's (limited) collection. That obscure mix I have of 70s Jesus People music? Not available. That really horrible EP I recorded with my band 10 years ago and still listen to all the time? No luck. 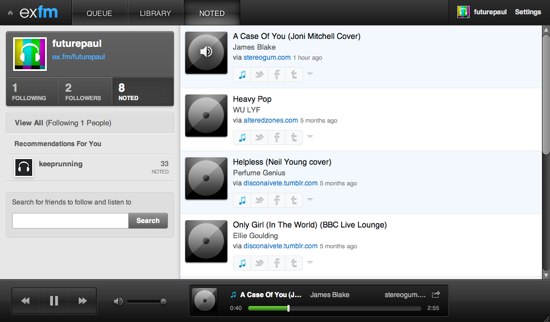 Even less forgivable than those examples is the complete lack of support for music I find every day on MP3 blogs and YouTube (Rihanna "What's My Name," chopped and screwed; James Blake "A Case of You," live on BBC Radio 1) -- songs that either will never make it into a limited library like Rdio, or at least won't be on there for a few months. For this I use a third "app," which is the Exfm extension for Chrome. It basically builds a database of MP3 links you find through your interweb travels, and allows you to create and share playlists based on those files. You don't have to download a thing, either. It's less of a massive "cloud" and more like millions of little "cloudlets."

Obviously, if Google allows me to make playlists out of my iTunes library and anything it has inside a fully fleshed out subscription library, we'll be most of the way there. I can handle the hassle of downloading MP3s I find and adding them to iTunes, and all my historical acquisitions are already in there. At least it's better than downloading an MP3 from a blog and then turning around and uploading it into Amazon Cloud Player just so I can hear them on my mobile device.

Still, I feel like there's a better way. I need a cloud that isn't an island. Lock-in might be an aging concept for a successful music ecosystem, but there's another way for one of these services to establish itself for the long term. It's not about suckering me into buying so much of their DRM'd music that I can never leave, it's about them giving me seamless access and information to so many of my own hard-won music discoveries that I'd never have a reason to go anywhere else.

Rdio's only lock-in is the promise of new music discoveries from my loved ones (with a nice dose of "everybody's doing it!" to get you on board), and even that has proved pretty effective so far. Sadly, from the looks of it, Google won't be able to compete on that peer pressure front, at least out of the gate. Google continues to come up short in its social offerings, and according to the leaked app there aren't any built-in social functions in the mobile experience. For folks who have never tasted a social music lifestyle, that might not be a big deal, but for anybody hooked on Rdio (or, to a lesser extent, Apple's Ping), that's some hard stuff to give up just for a slightly better library.

Google still has a chance to win in other areas, however, and I hope they sieze on those opportunities. Also, I hope they build this app and service for everyone, not just Android users. I spend most of my time using the web player for Rdio, portable music is really just a small portion of my music listening experience. Additionally, my peer group is pretty evenly split between Android and iOS these days, and I'd hate to leave half of everybody behind just because there's a flashy new service on Android. Google built its eBooks app for iOS and the web, doesn't it make more sense to try for multi-platform dominance in music? Is Google a service company or a OS company? I think Rdio has demonstrated that music is so much more fun when it's shared with friends -- I hope Google gets that message.

Anyway, we'll find out this week how much of this stuff is fantasy, and how ready Google is to take on the Apple and Amazon juggernauts -- and the Rdio and MOG upstarts. What's clear is that there's tons of room for innovation, and that my music service hopping days are likely far from over. Right, Apple?