How Google controls Android: digging deep into the Skyhook filings

Share All sharing options for: How Google controls Android: digging deep into the Skyhook filings

You might remember that a company called Skyhook Wireless sued Google back in September for business interference and patent infringement -- the Skyhook XPS WiFi and cell tower positioning system was all set to ship in the Droid X before Google got involved and Motorola dropped it from the phone. The case is still ongoing, but it just passed a major milestone last week when Google's initial motions to dismiss and for summary judgment were denied -- and lucky for us, a huge trove of documentation was unsealed by the court. The sheer amount of information is enormous -- over 750 pages across 88 documents -- and it offers a look into the nitty-gritty of Google's Android device approval process, including emails between Andy Rubin and Moto CEO Sanjay Jha. Perhaps surprisingly, it's relatively clear from the evidence that Google is the major gatekeeper between OEMs and the market -- and that's just the tip of the iceberg. We've gone through the entire stack of documents and pulled out all the information we can, so clear your schedule and let's dive in.

Here's how we're going to do this: the entire dispute rests on Google certifying Motorola's devices as Android compatible, so first we're going to look at Google's Android app license agreements. Then we'll go through the emails that comprise the bulk of the filing and put together a timeline of how Google dealt with Motorola, Skyhook, and Samsung to get a sense of what actually happened, and then we'll wrap up with some larger conclusions about the way Google handles Android. Okay? So let's get started. 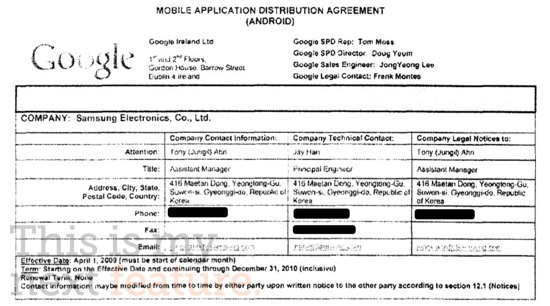 To start with, the exhibits include both Samsung- and Motorola-specific versions of a document we've always wanted to see: the license agreement for Google's branded Android apps like Gmail, Google Maps, YouTube, and Android Market. Interestingly, the contracts aren't identical, although they contain similar terms, and huge chunks of both have been redacted. There are still some interesting tidbits to be found, however.

So after all that, here's what we've learned: Android might be open-source, but Google maintains tight control over its OEM partners by restricting access to apps like Gmail, Maps, and Market with a strict license agreement that hinges on Android compatibility. That's what we've always suspected, but now we have definitive proof. And since Google both defines the relevant compatibility standards and decides which devices pass, it wields considerable power over its partners. Which, of course, leads to the central question in Skyhook's case...

Does Google use the Android compatibility test to manipulate OEMS?

Fundamentally, this entire case is about whether Google uses Android compatibility testing to manipulate OEMs like Motorola and Samsung. And this email from Google's Dan Morrill seems to indicate that Google does exactly that: he says that it's "obvious to the OEMs that we are using compatibility as a club to make them do what we want."

Now, Morrill's email actually has nothing to do with Skyhook, so it's a little out of context: Morrill was discussing Samsung and T-Mobile bundling a LogMeIn app that required root access, and arguing for a more granular approach in regulating what software devices makers can ship running as root. But Skyhook's entire argument is that Google isn't hesitant to use compatibility as leverage to control its platform because OEMs like Motorola and Samsung are heavily dependent on Android, and Morrill's matter-of-fact tone certainly reflects that attitude.

And indeed, Skyhook ran headlong into Motorola's dependence on Google: Motorola flat-out told Skyhook that Android devices are "approved essentially at Google's discretion," and that Moto couldn't afford to risk its relationship with Google. Motorola also told Skyhook that its carrier agreements require Google's apps be preloaded on its phones, so Google's compatibility decision was doubly important -- if Motorola shipped software that didn't have Google's blessing (and apps), it would immediately violate its contracts with carriers.

So that's the core issue. Truth be told, we've been asking about Android device certification since we first heard Andy Rubin delineate the difference between "strings attached" and "Google Experience" devices at I/O 2009 -- a policy Google seemed to struggle with almost immediately as modified Android builds hit the market in phones like the HTC Magic and Hero. So how does Google handle OEMs that push the boundaries of Android? We can't know all the answers, but we can certainly build a timeline and see how the company dealt with Skyhook.

At this point Google had three major concerns about Skyhook XPS: first, that Skyhook devices would somehow contaminate Google's location database, second, that devices using Skyhook would not contribute to Google location database, and third, that OEMs might continue to choose Skyhook over Google's location service. What's interesting about this is that the first and second problems are opposites -- although Google's database wouldn't be contaminated if Skyhook users weren't contributing to it, Google was equally worried about the loss of location data. For Google, no data is apparently worse than bad data.

Skyhook heads to the courts

It wasn't just Motorola that planned to ship devices with Skyhook XPS positioning -- Samsung had already inked a deal to use Skyhook in the Galaxy S line of phones, and it had even shipped a few thousand devices. Google responded quickly to the situation after deciding XPS was a threat and declaring it incompatible.

So what does all this mean? At the very least, it's now extremely clear that Google plays a major role in Android device development, to the point where Andy Rubin himself approves and denies requests from OEMs. It's also clear that Google places tremendous value on collecting location data, and it acted swiftly when it determined Skyhook's deal with Motorola might threaten its ability to collect that data. Hell, one of the headings in Google's summary judgment brief is "Skyhook was not entitled to deprive Google of its contractual right to collect location data on Motorola Android devices." Can't say it much plainer than that, really. And Google's doesn't hesitate to use its muscle to get what it wants from OEMs -- it revised Samsung's app license to specifically require Google location services be installed and used by default. Whether or not Google's behavior is anti-competitive is a matter for the court to decide, but it's definitely aggressive.

Google's attitude towards Android fragmentation is also fascinating: not only does the company tell partners that it has to control fragmentation in order to ensure Android's success, it's gone so far as to forbidding Samsung from producing or even contributing software to unapproved devices. We've been hearing that Google's taking a harder line towards fragmentation, and that clearly seems to the case.

As for Skyhook's case itself, it's hard to say. Google's concerns about the loss of data collection and the potential for contaminating its location database are both valid, and although Skyhook's put up enough of a case to survive summary judgement, it'll have to show that Google actually used the power of its Android app license improperly to keep XPS off Motorola and Samsung devices. (And Google will have to sort out exactly how Skyhook's data would contaminate its location database when Skyhook explicitly refused to send the data at all.) And let's not forget that nothing presented so far even touches on the patent-related aspects of the case. This whole thing is going to take some time -- and we'll have another huge set of documents to sift through at the end of it.

Lastly, we'd also note that the Open Handset Alliance, the nominative keeper of Android, is not mentioned a single time by any of the parties involved. The OHA might well steward the open-source aspect of Android, but when it comes down to actually shipping a device, it's entirely Google's show. And that might be biggest takeaway of all: for all of Android's open-source ideals, Google is very much in control -- and it's not shy about letting its partners know it.