Well, it sure did take a few days for Verizon and Motorola to roll out the Android Honeycomb 3.1 update to the majority of Xoom owners, but as they say, better late than never. Yes, my very own Xoom finally received the over-the-air update early Saturday morning, and I spent much of the weekend messing around with the fresh software build. The new version, as I detailed when it was announced, isn't extremely drastic, but it sure does improve stability and add some welcome features. Hit the break for some impressions and a short video walkthrough to see what's improved. 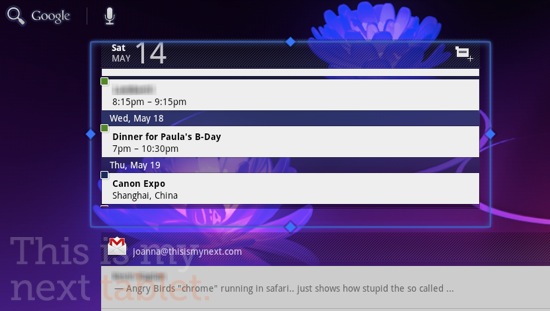 During the I/O unveil of 3.1, Google's Mike Clarin spent most of his time demoing the new ability to horizontally and vertically resize widgets. And while something like the size of a widget may seem incredibly trivial, it's actually now one of the best additions to the Honeycomb platform. You can now simply hold down on a widget and stretch the edges to adjust the size to your liking. At the moment, the feature only works with Google widgets -- Gmail, Mail, Calendar, Bookmarks -- but it will apparently be very easy for developers to add the resizable feature, so we should see some more soon. Again, it doesn't seem huge, but for those of us that are obsessed with keeping our panes organized and well laid-out, it's a big one.

The other major UI tweak is the ability to now scroll through the recent apps list. There's not too much to say about this one, but it is certainty a much appreciated multitasking addition. 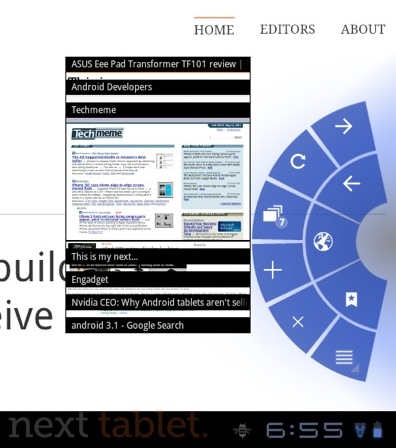 The overall look of the browser hasn't been altered, but the "Quick Controls" option, which can be fired up under Browser Settings, now allows for viewing the thumbnails of open tabs. I've actually been using the Quick Controls for a while now, and while I love the convenience of having the semi-circle of options on the left or right edge of the screen and the new thumbnail feature, I do wish there was an option to have that and the regular tabbed browsing at the same time. Unfortunately, enabling the Google Labs option forces the browser to full screen mode so the regular tabs on the top disappear. Also, the browser still launches mobile versions of sites. 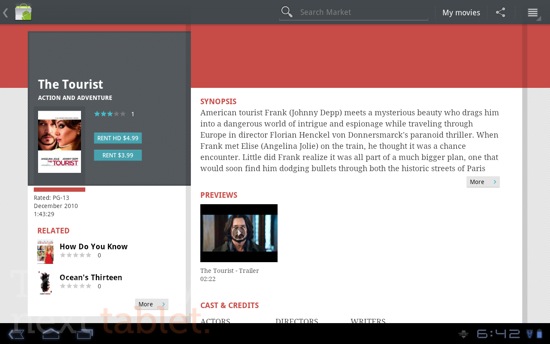 Unfortunately, Google still hasn't revamped the Market to specifically delineate between tablet and phone apps, but there's now a new Movies tab for renting flicks. The purchase process is fairly straight forward -- I just buckled and rented The Tourist. The downloaded movie played back very smoothly in the new Videos app, which is really just the regular media player.

Speaking of things running smoothly, the entire OS seems to do just that now. Apps seem to open faster and transitions between menus appear to be snappier. Even just paging through the homescreens feels smoother. Browsing and Flash support also feels noticeably more stable -- in the last 48 hours I haven't encountered one (not one!) force close crash in the browser, which certainty wasn't the case prior to the 3.1 update. The only crash I've witnessed was the new Plume app, but that happens to be in beta still. I should also note that 3.1 adds USB host support, but I didn't have any of the cords -- a mini-USB to microUSB or USB to microUSB -- lying around to test it with any peripherals.

When Josh reviewed the Xoom back in February, the OS was very clearly a beta piece of software. The jump from 3.0 to 3.1 doesn't completely obliterate that beta stamp, but it certainty results in some much needed refinements to the overall experience. There are still some options I'd love to see Google add to make Honeycomb more user-friendly -- moving some of the buttons from the corners to the bottom menu bar, a revamped Market, and a simpler Settings menu are just a few. However, the core and stability of the tablet-aimed OS seems to be improving rapidly -- I just wish I could say the same of the app selection.