The Samsung Hercules is far from the only device in T-Mobile's pipeline for the next few months, of course -- and we've got some insight into what's coming next. HTC G-Infinity? LG Optimus II? The BlackBerry Bold Touch, Monza, and Apollo? It's all in here -- and a whole lot more. Follow the break for the month-by-month breakdown. 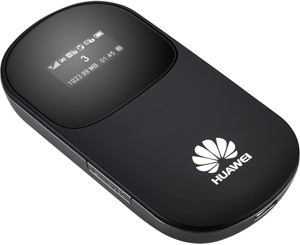 Thanks to TmoNews, rumors have been circulating in the past few days that HTC's dual-core Sensation 4G is locked for a June 8th launch, and we're happy to say we can independently verify that date (let's just hope it doesn't slip, as smartphone launch dates tend to). The 8th will also see the launch of the Samsung t589 Gravity Touch 2 and the t759 "Hawk," a device that's been leaked as the Exhibit, an upper-midrange Android slab running Gingerbread. Finally, expect the Huawei E587 "Wayne" (pictured right), a 42Mbps HSPA+ mobile hotspot with 802.11n capability and a built-in display.

A week later, the 15th should bring the Samsung t499 "Tass," which Cell Phone Signal notes will likely be an Americanized version of the low-end Galaxy Mini, possibly called the Galaxy Suit.

Things get quiet for a couple weeks until the 29th, when the Samsung t379 "Triumph" launches -- likely as the Gravity 4. Historically, the Gravity series has been all about featurephones with slide-out QWERTY keyboards, so I'd expect a refreshed version of the existing Gravity 3 here. 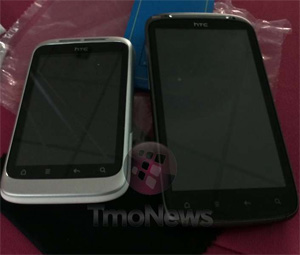 July starts off with a bang thanks to the long-rumored HTC "Doubleshot" on the 6th, which should launch as the myTouch 4G Slide. From the name, you can get a sense of what to expect here: a follow-up to the myTouch 3G Slide with HSPA+ and, if the current rumors are to be believed, a dual-core processor, 3.7-inch WVGA display, and 8 megapixel camera. The following week we should see the HTC "Marvel" (pictured left) on the 15th, which TmoNews has previously outed as a T-Mobile-branded Wildfire S. Midrange specs like a 3.2-inch display and 800MHz Qualcomm processor are on tap for the Marvel, just in case the Sensation 4G is a little too much phone for you.

Finally, BlackBerry fans, listen up: we've got the so-called "Monza" listed for July 27th, which suggests that it has slipped about a month since TmoNews had it lined up for June 29th back in an April report. Specs we've received on this full-touch handset include 14.4Mbps HSPA, a 3.7-inch 480 x 800 display, 1.2GHz single-core Snapdragon, a 5 megapixel cam with 720p video capture, and BlackBerry 7 (which, interestingly, our documents still identify as BlackBerry 6.1). T-Mobile expects to sell it for under $200 on contract. 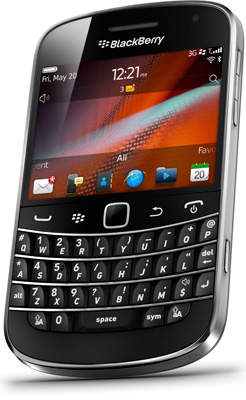 August is another banner month for BlackBerry fans with the launch of the Bold Touch (pictured right) on the 17th and the "Apollo" on the 31st, a phone that BGR has already identified as a next-gen Curve with the traditional portrait QWERTY keyboard.

That's all we've got listed for phones this month, but tablet shoppers will be greeted by the Huawei S7, an Android-powered product that's already available at your local Best Buy in WiFi-only trim; presumably, T-Mobile's branded version will feature an HSPA+ radio (and considering the launch window, we'd hope for something newer than Android 2.2, too).

Back to that mighty Samsung Hercules -- you might remember we'd mentioned in the last post that it was scheduled for acceptance in August. If all goes well, we're now hearing that date puts it in line for a retail launch on September 26th, just in time to capture some of that back-to-school spending money.

Before that, we'll see the LG "Flip II" on the 14th, but I'll be honest -- I'm not quite sure what this would be the successor to, because there's no product called the LG Flip in T-Mobile's current lineup. If I had to take a shot in the dark, I'd say it might replace the dLite, which is the most notable LG clamshell that the carrier offers.

And a little love for the Symbian fans: T-Mobile is targeting a Nokia "Panda" for September 21st, which is listed with a retail name of -- you guessed it -- Nuron 4G. I'd figured the Astound was the Nuron's successor, but this development seems to suggest that the existence of the Astound doesn't mean the Nuron name is gone for good. They're looking to launch it for under $150 with 14.4Mbps HSPA, a 3.2-inch 360 x 640 display, a 5 megapixel EDoF (read: non-autofocus) camera, WiFi, and Symbian 3.1 -- a perfect Nuron replacement, needless to say, as long as subscribers can carry over their non-smartphone data plans.

LG has two in the works called the Maxx and Maxx Q (which is called out as a Maxx with a QWERTY keyboard) for November 2nd, but beyond the names, we don't have any details on what those phones may be. Some of the most exciting-sounding items in the roadmap, though, don't yet have launch dates: