Toshiba's Thrive Honeycomb tablet starts at $429, will be joined by another tablet before the end of the year

Toshiba's Thrive Honeycomb tablet starts at $429, will be joined by another tablet before the end of the year

Toshiba's been talking about its 10.1-inch Honeycomb tablet since CES, but has been keeping a tight lip on its name and pricing. Until now, that is. We caught up with Toshiba's Jeff Barney and Phil Osako this morning and they confirmed that the new tablet will in fact be called the Thrive and that the pre-sale will start next week. Like the other WiFi Honeycomb tablets, the Thrive is priced to compete — the 8GB version will go for $429, the 16GB for $479, and the 32GB for $579.  Not too shabby for a tablet with an IPS display, but how exactly is this one different from the loads of other 10.1-inch, Tegra 2 Android tablets hitting the market? Well, first of all it will launch with 3.1, but Barney also stressed the fact that the Thrive's got full-sized USB and HDMI ports as well as a swappable battery. In fact, the entire back of the tablet comes off and you can buy color backs for $19.99. Whether those things make up for its .62-inch thickness is something we'll have to wait on.

As for the software experience, Toshiba is adamant about not messing too much with the stock experience. "We think that changing the interface can be confusing to a customer, so we are keeping it pure with enhancements," Osako said. The main tweaks include the addition of its Resolution + brightening technology and an "enhanced" file manager. And as you'd expect, it plans to throw on some third-party apps, including QuickOffice and LogMeIn.

The Thrive will start shipping in early July, but that's not the end of Toshiba's tablet plants. While Osako and Barney wouldn't get specific, they said there would be another Android tablet this year with a different screen size. Is there another seven incher in our future? We shall see. Some press shots after the break. 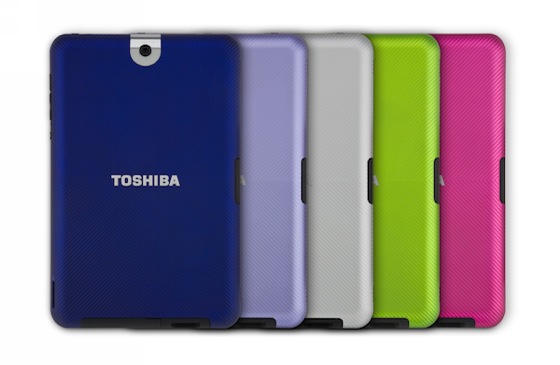 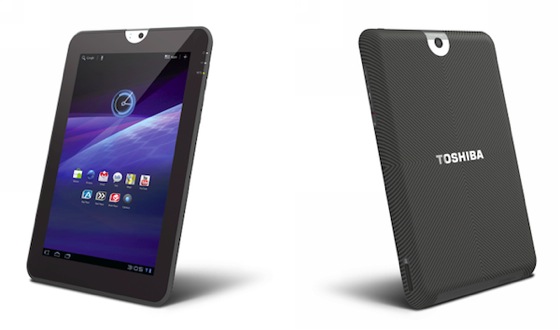