Last Monday, Steve Jobs debuted one of Apple's boldest products to the world, iCloud. At long last, the brains in Cupertino seemed as if they were set to fully embrace the internet and its inherent, omnipresent power. There had been rumors swirling previous to the event (and even some slight confirmation from the company) that the new product would encompass all manner of content and services, particularly when it came to your media collections, and even more particularly, your iTunes library. By noon Pacific Time on Monday, it was clear that Apple had indeed captured much of what its competition could not. But it was also obvious to me, and perhaps others, that it had once again missed not only its opportunity to assert itself as a force to be reckoned with on the internet, but still seemed to be missing the point of the "cloud" entirely. Read on to find out why.

It's been no secret that Apple hasn't had the best track record when it comes to the internet — even Steve joked about it. It's impossible to understate just how bad MobileMe looked to the world when it launched back in July of 2008 (and not just the world, apparently), but the latest attempt to marry Apple polish with internet savvy — Ping — didn't look much better. Of course, iCloud is a different beast; a service meant to disrupt the cycle of syncing and re-syncing devices and create a unified, multi-sided symphony of your personal content. It allows you to keep your iPad, iPhone, and home computer completely in lockstep all of the time — thanks to the cloud. But this isn't any cloud you know.

Let's be clear about what happens when iCloud goes live — according to what was described on stage at the event, and what I've confirmed with Apple PR — the service will effectively replace the current web offerings of MobileMe. That means that when the cutoff date of June 30, 2012 comes around for users, the web-based email client, calendar, contacts app, and other components of the web suite will cease to exist. You will no longer be able to log in and check your mail through a browser, change calendar events, or edit contacts. It's unclear right now if the photo and video sharing aspects of MobileMe will continue, but there was certainly no mention of sharing or web views at the conference. Your devices will become not just the primary place where Apple intends for you to do your work and get your content — they'll be the only place.

Steve Jobs opined on stage at WWDC that "a lot of people think the cloud is just a hard drive in the sky." Oddly, what was meant to be a dig at the competition came off to me as a perfectly accurate description of the service he was in the process of introducing. While competitors like Google and Microsoft continue to pursue a strategy of "you everywhere" with front-facing web products that allow you to create and collaborate with nothing more than a connection and relatively modern browser, Apple seems to be moving almost backwards. Sure, syncing our devices is clearly an important and yet-to-be-solved problem, but Cupertino isn't just improving sync across devices. It also seems to be concluding that it can't — or won't — compete on the web, and I think that's a mistake. 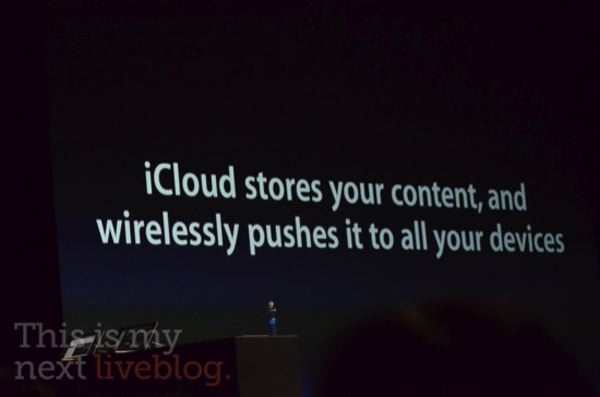 As I sat watching the presentation, I was legitimately excited about the suite of products the company was introducing and the way that they might all play together using the cloud. As a Time Capsule owner, the advances made in file handling in Lion seem like the perfect next step, and coupled with iCloud's ability to sync and share versions of the same document amongst all my devices, it felt like the true start of something new. But that something new has a piece missing — and that's the web.

While I won't argue that Apple and others have had tremendous success with native apps and services, it's also impossible to downplay the importance of the web and what it brings to applications. It's not just that many of the applications we use are actually intimately tied to the web (even Apple's own products are able to make quick changes like the switch to iCloud services in iOS 4.3 thanks to markup being used in place of native code), it's that the web provides something native applications cannot. There is no native application for the Mac or iOS that replicates the shared document editing of Google Docs; there's no mail application that exists for the Mac which will allow me to access my important information from anywhere in the world with or without a device in hand; there is no photo sharing service for iOS or the Mac which is as flexible or accessible as Flickr. When I need to access music with my Rdio account, I can do it from a plain old web browser, or an Android, iOS, or even BlackBerry application — and the ability to shift between those portals is incredibly powerful.

When it comes to Apple, it feels to me like the company views the web as a technology which undermines rather than enriches its products. It wants you to talk to the cloud, but only through its portals and its gateways, in closed loops and private networks. Is it possible that for the company Apple has become — the lock-in PC-maker, the gatekeeper, the retailer — there's still a little too much Wild West in the web? Is Apple's failure with or aversion to web services a byproduct of the desire for complete control over its ecosystem and products? Or is the gang in Cupertino just not that good at the internet?

I made a comment to John Gruber (of Daring Fireball) after the iPad 2 event which spurred him to write this prescient piece on just where and how Apple was missing out on the cloud. Many of the requests or observations he makes have now come to fruition in terms of syncing, activation, and even file storage and management... but the company seems to have forgotten the one big piece he talks about towards the end — the web front-end for these services. Instead of pulling up the stakes here, Apple should be doubling down. The internet is not just going to go away.

I guess ultimately, my hope was that Apple would take what it's created in its MobileMe offerings — which are actually quite good right now — and improve upon what it's built. Why not add cloud-based Pages and Numbers. Give us group editing, bring all those new Mail features online. Make your web tools even better — make them good enough to compete with Google, because right now the only threat to the big G's online empire is Microsoft, and I have trouble believing Apple wants to cede the web to either of those competitors. Instead, there is no alternative now, only a device lock-in scheme which certainly serves many... but not all.

Another strange phrase cropped up during the presentation of the new syncing service last week; Steve Jobs told attendees that "The truth is on the cloud." From what I understand, that sentiment has become something of a mantra around One Infinite Loop, and for good reason. There can be little doubt that what you'll get from iCloud on your devices is indeed the truth, but make no mistake about it: it's Apple's truth.