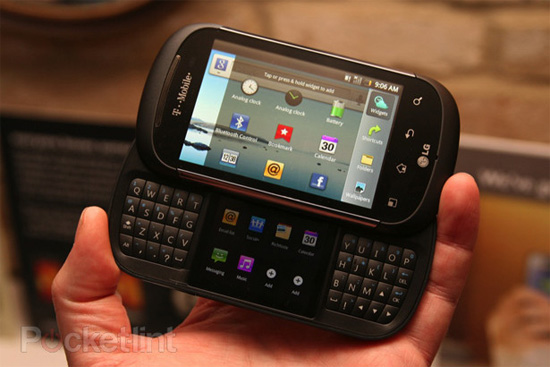 Never fails: just when you thought the world had finally exhausted its smartphone form factor options, here comes another. Pocket-lint has spotted an unnamed, unknown LG slider bearing T-Mobile branding at an event in the UK; closed, it looks like any other midrange Android slider on the market today, but open it up and things start to get crazy. The area where you'd normally expect the standard QWERTY arrangement is dominated by a small touchscreen embedded between two keyboard halves, and it appears to be designed to supplement the main display up top -- in Pocket-lint's photos, we see shortcuts for quickly switching to commonly-used apps, for instance. The hardware is said to look a tad unfinished and feel pretty wobbly, suggesting this is a prototype unit (I hope).

So, what is it, who's getting it, and when? All good questions. The phone looks destined for the US, which makes sense: Pocket-lint found it at an event put on by Orange and Kineto Wireless, the company that worked with T-Mobile USA to launch its Wi-Fi Calling service. If you cross-check it with our leaked T-Mobile roadmap from a few weeks back, it could be the Flip II, the Maxx Q, or perhaps even a variation of the Optimus II "Gelato" -- and with the exception of the Flip II in September, we don't have time frames for those devices.

Though my knee-jerk reaction was to think this was a dumb concept, split mobile keyboards are nothing new -- Nokia was making them the better part of a decade ago -- and they can be every bit as usable as a full landscape keyboard if implemented correctly. Really, the question is whether LG will be making that secondary display useful enough to justify its battery drain and added expense. A better idea than the Kyocera Echo? Quite possibly.