Archos announced a pair of Android 3.1 tablets today: the 8-inch 80 G9 and the 10-inch 101 G9. While Archos and Seagate would have you believe that the standout feature is an integrated Momentus Thin 250GB hard drive, we're more intrigued that these tablets are the first from Archos to be blessed with official Android Marketplace and Google mobile app support. Both are set to be released in late September for reasonable pricing (at least for the 16GB flash-only versions) : $279 for the 80 G9, $349 for the 101 G9.

Both tablets are powered by a dual-core OMAP 4 chip from Texas Instruments clocked at 1.5 GHz, which Archos is using to full effect to allow full 1080p video playback.  Archos will bring its traditionally wide codec support along for the ride with an "optional plugin" that includes support for AVI, MP4, MOV, 3GP, MPG, PS, TS, VOB, MKV, FLV, RM, RMVB, ASF, and WMV. After busting out the kickstand, you'll be watching these videos on either the 80 G9's 4:3 screen with 1024x768 screen resolution or the 101 G9's 16:10 screen at 1280x800. That, or you'll be watching said video at 1080p on your television with HDMI out. The 250GB hard drive is an option that adds 3mm (and presumably a bit of weight and a hit on battery life) to the standard version with 16GB of flash storage. 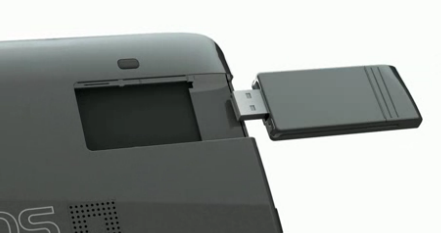 Archos calls these tablets "3G-ready" in that they have a proper USB port that can accept Archos' also-announced 3G USB stick, a $49 add on that will come with a pay-as-you-go plan instead of a longterm contract. When inserted into the tablets, the stick is perfectly flush with the rest of the device, but you can take it out and use it with your regular latptop as well.

Archos' previous tablets and media players were a little premature, getting introduced without the blessing of Android Marketplace or Google apps like Gmail and Maps. Android's openness aside, any manufacturer that doesn't take the time to work within Google's remarkable control over the Android platform is going to see its Android products look like also-rans. Now that Archos and Google are playing nice, we'll have to wait until September to see if these tablets can revive the slightly tarnished Archos brand in the Android age.