Share All sharing options for: Resident Evil: The Mercenaries 3D's saved data cannot be erased, GameFly labels it 'not rentable' 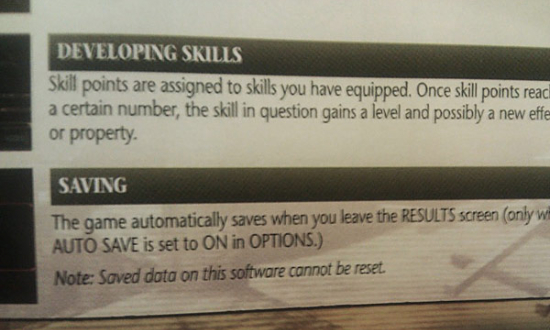 Don't you hate it when you're three or four levels deep into a game's Settings menu and you accidentally click "erase all save data"? And then you accidentally hit the confirm button one or two more times? No? Well, Capcom seems to. According to its instruction manual (via NeoGAF) and later confirmed by Capcom itself, saved data for the Nintendo 3DS' Resident Evil: The Mercenaries 3D cannot be erased or reset. What that means is whatever skill points and mission scores that are accrued stay with the cartridge until death do they part.

Now, the cynical mulligan-lover out there might think this is Capcom's way of curtailing the used game market, from which it receives little to no money. GameFly has responded by reclassifying the game as "Not Rentable" — presumably due to the perception that its customer don't want the cartridge's save game to be a community effort (via 1UP). But rest assured Capcom has released a statement promising that "secondhand game sales were not a factor in this development decision." The company even went so far as to tell EuroGamer, "the game's value at second-hand in the UK is not affected by whether or not the game can have its data reset." Flimsy, unbelievable reasoning? You bet. Already in Japan, where the game debuted June 2nd, shops are selling used copies for as low as 500 yen (about $6.18).

Nowhere in the statement does Capcom explain why it made this "development decision," only that it apparently didn't do it because of the secondhand market — which doesn't really make any sense to us, seeing as Capcom can't regulate the used market. If there is some hardware restriction, Capcom isn't exactly being forthcoming, and given the 3DS' 2GB internal memory (plus SDHC expansion slot), we seriously doubt it's that. Granted, Mercenaries 3D is not the first title to enact such a seemingly arbitrary limitation — Monkey Ball 3D apparently has the same restriction — but it's certainly caused the largest outbreak of internet furor. The one bright spot is that Mercenaries isn't narrative-driven; what's being saved isn't campaign progress so much as character progress and high scores. That's certainly no excuse, however, especially when we're faced with no clear or sensible explanation. It's a nasty precedent should more high-profile games start following suit. Capcom's full statement after the break.

"In Resident Evil: The Mercenaries 3D, all mission progress is saved directly to the Nintendo 3DS cartridge, where it cannot be reset. The nature of the game invites high levels of replayability, encouraging fans to improve mission scores. The game’s save mechanics cannot remove any content available for users. Secondhand game sales were not a factor in this development decision, and we hope that all our consumers will be able to enjoy the entirety of the survival-action experiences that the game does offer."