Share All sharing options for: The night Diplo destroyed Turntable.fm

I first heard about Turntable.fm from Julie while she was rocking out to indie hits on her laptop while preparing a salad. Julie almost destroyed my Rdio social group's "Heavy Rotation" chart due to her love of Brandon Flowers, but I still like her because she's dating my friend and co-worker Ross Miller (no relation). Thomas and I made fun of Julie when she explained Turntable.fm, but I was secretly jealous of how cutting edge she was. After another week of hearing Turntable.fm be discussed endlessly in the echo chamber, I was finally ready to give it a try.

When I first arrived at the site, I was blocked because the site is currently invite only. Have no fear, however! All you need is a Facebook friend that's already past the velvet rope. I'm not sure which specific Facebook friend ended up vouching for me (Julie is the only confessed Turntable.fm user in my social group), but whoever it was: "thank you."

The first room I tried was called "VIPfest." I clicked on it because it had the most listeners (144). There was some club-ey music playing that I wasn't really feeling, so I backed out. My next try was "Indie While You Work" -- I was still planning on getting some work done at this point. It was playing a song that I liked (St. Andrews, by Bedouin Soundclash) that I'd never heard before. That seems like the point of listening to music chosen by another human, so I went with it.

I began to take in my surroundings, and didn't like what I saw. It looked like Zynga was responsible for the UI and the "adorable" avatars everybody was wearing made me immediately assume I was surrounded by tweens. Five laptop-equipped DJ avatars were up in the "booth," with the crowd of maybe-children below looking up at them. Some people were bobbing their heads, apparently because they liked what they were hearing; other people were standing there stoically, waiting for the next song to start.

It's amazing how much the opinions of others impact my own enjoyment of music. Anything less than total and complete enthusiasm from my fellow users (voiced in a chat window on the right side, and word balloons over the avatar's heads) and I was itching for a song to be over. It's like I had all the anxiety of a DJ, terror that every new bar of music could turn the crowd against me -- except I wasn't the DJ. I'm pretty sure I'd implode under the pressure if they ever let me in the booth.

And then I got "recognized." I'm not even sure how, because I didn't see any usernames of other folk entering the room, but a fan of Engadget who I'd actually met at a reader meetup in New York a while back asked me if I was "the" Paul Miller. When one of the DJs apologized for not knowing who I was, another listener called me a "famous blogger." Not to cast any doubt on my widespread, mainstream celebrity, but Turntable.fm seems to clearly be in "that" stage of a startup where the same early adopters that descend on every buzz-worthy project (cough, Quora, cough) have arrived -- Famous Blogger Paul Miller just the latest among his compatriots.

I eventually wore out on "Indie While You Work" during a Justice remix -- I love Justice, but it was late and I was looking for something a bit more chill. Someone in "VIPfest" was playing Kanye's "Heartless," so I went back in there. That's when things got weird.

When I was in the room earlier I had failed to notice it was being helmed by Gorilla vs. Bear, of Gorilla vs. Bear fame. Next to him was Ryan Schreiber, founder of Pitchfork. In chat was "the REAL DIPLO," who turned out to be the real Diplo. Through the magical celebrities-are-people-too power of Twitter, Diplo had followed Ryan into the room, and now GvB was attempting to get him on the decks.

This isn't as easy as it sounds. See, the owner of a room can boot people from the decks to free up one of the five slots, but whoever clicks on that free spot first gets it. Either having the real Diplo in their midst had caused a wannabe DJ frenzy, or the real Diplo isn't very fast on the draw. GvB probably kicked twenty different people from the room before Diplo managed to play anything.

I don't really know anything about Diplo, except that he worked with M.I.A. and that there's some sort of beef now. I certainly didn't recognize the Major Lazer track he played -- he kept on saying he couldn't play the third verse, so I assumed it was unreleased. It was pretty fun, but I was more caught up with the idea that some nice celebrity man was playing music that he'd clearly uploaded from his computer onto a bizarre new service where you choose an avatar and pretend to be at a live concert while you're actually talking in a circa 1990s chat room.

Nobody else seemed to be so enamored -- Diplo was winning plenty of followers and some of my fellow Zynga-alikes were bobbing their virtual heads, but the haters were much more vocal: "Diplo? More like DipNO!" After GvB and Ryan played some tracks, Diplo hit us with another new one: "Untitled." By this point the room had basically gone insane. Many of the people GvB had booted to get Diplo on the decks were griping about it, others were spamming the chat with requests to play, promising great selections from their musical catalogs. Others had given up on begging, and were instead spamming links to a new room they'd created. But everybody else seemed to be trashing Diplo, Major Lazer, and "Untitled." After finishing his playthrough, Diplo left because of all the "h8." 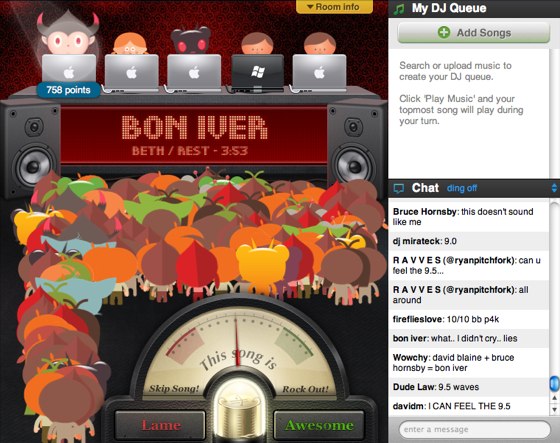 I haven't seen a room this wild since my AOL Chat days. A ton of users had changed their names to celebrities. There was a Lady Gaga, a Bon Iver, and a Joanna Newsom, to name a few. None of these checked out on Twitter, sadly. A DJ named "Carles" (who turns out to be Carles of Hipster Runoff, completely unknown to me at the time) played "Mandolin Rain" (a hilarious juxtaposition to the chat that was ensuing) and Pitchfork Ryan tweeted about it. Bon Iver became enough of a meme that GvB played "Beth / Rest" off of Bon Iver. It was seriously chill, the best song I'd heard all night. The chat turned on Pitchfork's 9.5 score of the album, almost as if Pitchfork Ryan wasn't there. Some people just typed "9.5" into their chat box and then hit enter. The virtual Ryan, nodding his avatar's head to the beat, asked us all: "can u feel the 9.5... all around[?]" Carles "spun" a dark, terrifying spoken word track he'd recorded about VIPfest called "VIPfest is s0 VIP." I was scared.

Diplo came back, ego somehow restored, and played a third track. It was really weird, and I was getting tired. Maybe I just don't like Diplo (in case you do like Diplo, here are the three Major Lazer tracks he played). Maybe I was disappointed in myself for being sucked into this bizarre vortex of musical tastemakers and clamoring playlist jockeys who would rather play music than listen to it. Maybe I was pissed that I didn't get recognized in "VIPfest" but the nerds over in "Indie While You Work On That PHP E-Commerce Backend" had known who I was.

But I knew what I needed to do. I closed the browser tab. I opened Rdio. I chose a song, just for me.