Four new Mango-powered Windows Phone devices got a quick preview at the Microsoft Worldwide Partner Conference today. The headliner is definitely what you're looking at up top, a Samsung phone rumored to be the SGH-i937 that bears more than a passing resemblance to the Galaxy SII line, including a front-facing (and presumably Skype-friendly) camera. Phones from ZTE, Acer, and Fujitsu round out the previews -- the Fujitsu standing out in pink with "a waterproof design."

Sadly, we didn't get another look at Nokia's "Sea Ray" prototype, but it's good to see that Microsoft isn't forgetting its other OEMs during the race to get Nokia devices out this year. We gave Windows Phone Mango an extensive preview last month and developers are banging away on it this month, but we're excited to finally see it on new hardware for the months ahead. One thing you won't see in the months ahead (or ever, apparently): Windows Phone 7 on tablet devices, as Microsoft re-confirmed at the conference that Windows 8 will be their only tablet OS.

. Update 2: video has been pulled.

Update: Microsoft tells us these aren't production phones and shouldn't be taken as indicative of what's coming down the line. 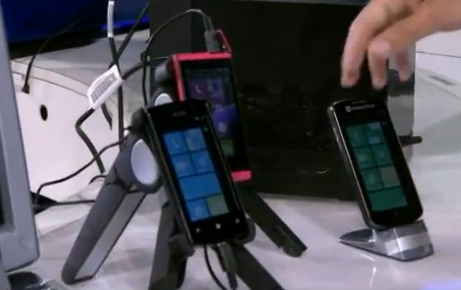