It's a commonly-held belief that Sprint (and other US carriers) are preparing releases of branded handsets based on the Galaxy S II, Samsung's well-equipped successor to the Galaxy S that's been circulating Europe for a few months. Well, we've got a fresh pair of shots this afternoon that certainly seem to support the rumor, one of which shows a textured back of a device bearing both Sprint and Samsung logos alongside an 8 megapixel camera. Both the texture and camera are reminiscent of what we're expecting from S II-based models, so it all lines up. This phone might end up being called the Galaxy Within when it launches -- possibly within a matter of days or weeks -- and it'll undoubtedly be marketed as a high-end alternative to the Evo 3D that swaps 3D support for Samsung's trademark Super AMOLED Plus display tech. More on this situation as we get it -- in the meantime, follow the break for another shot of the phone.

Update: One more note -- we're told this is running Android 2.3.4 right now, so Google Talk video chat is a go out of the box. 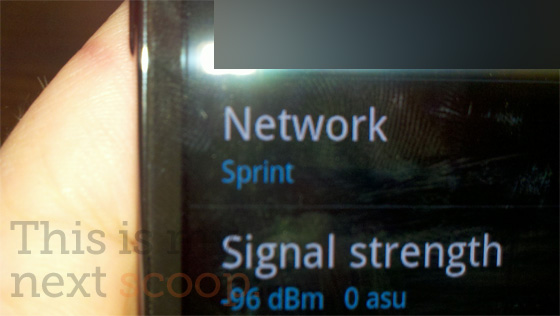