There's been talk of a Facebook iPad app since the iPad first launched, but back in 2010 Mark Zuckerberg declared that the iPad was "not mobile," and wouldn't comment further. Chatter around the app's eventual release has grown over the months, and today TechCrunch broke the news that the latest iPhone app update is actually a universal binary that contains the iPad-optimized layout as well. We took the plunge and jailbroke our iPad 2 to give it a go ourselves, and after some fairly painless SSH'ing and property list editing we were up and running. Follow along for a quick tour of Facebook's upcoming iPad app -- or something very close to it.

We should start off by mentioning that to unlock this functionality yourself, your iPad has to be jailbroken, so if you've already updated to 4.3.4 the wait will continue. We followed these directions over at iClarified, and the whole process was very straightforward. (Update: Some commenters have pointed out that you can avoid jailbreaking and still edit the .plist file in question -- we did jailbreak though). TechCrunch has also just issued another report indicating that Facebook has wised up to the trick and is trying to block it for folks who aren't already logged in. For what it's worth, the app still works for us but some of the features are no longer functional (namely Facebook chat).

The first thing you'll notice about Facebook's iPad app is the strong resemblance to its smaller-screened cousin. Along the left side is a navigation panel much like that on the Facebook website, with links to your news feed, messages, events, places, friends, and photos. Any groups you're a part of will also populate along this left panel for quick access. It can be toggled by a swipe to the right (much like Twitter's iPad app), or by tapping an icon in the upper left corner of main content screen. The main content area is nearly identical to that of the iPhone app. 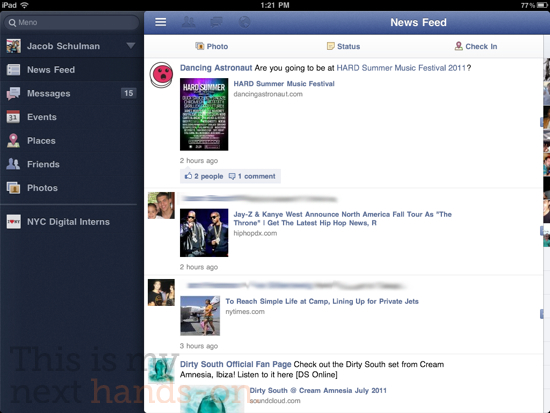 Individual tabs behave much like you'd expect, and many of the same functions are present as on the iPhone, things like various news feed filters and prominent buttons for status updates or checkins. Friend requests, messages, and notifications are kept handy in the top navigation bar, and you interact with them via standard iPad overlay menus -- much like the one for messages when using Mail.app in portrait orientation. 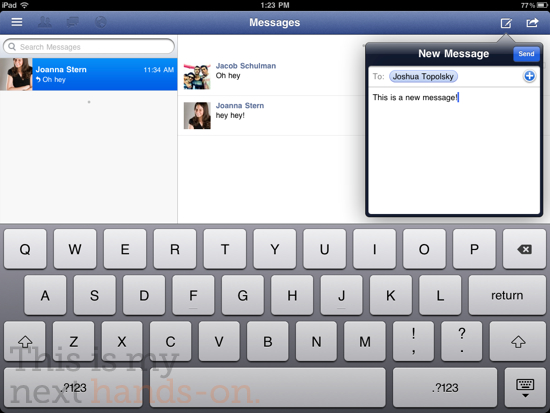 The interface for Facebook's native messaging system (not to be confused with Facebook Chat) is much like the native mail app as well, with previous messages along the left side and a larger space for composition along side it. Composing a new message also pops up an overlay -- not a fullscreen interface -- which seems a bit weird to us. The Events layout is virtually a carbon copy of the Messages' "sidebar plus content area" layout, replacing inbox previews with upcoming invites and related information. 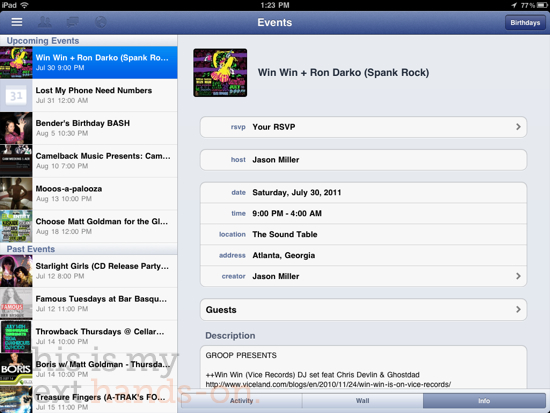 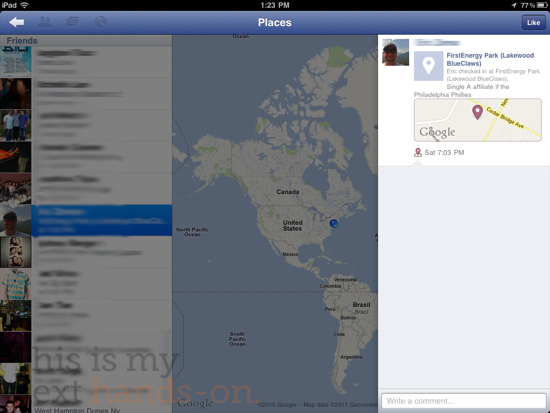 Facebook's location push is apparent in the Places tab, which hooks into the iPad's GPS or WiFi triangulation capabilities and displays a large map on the right side with friend updates along the left. Tapping on any checkin toggles more information to appear from the right, where you can comment or view a fullscreen map of the place in question. The static map at right seems to be reserved for your own personal checkins, though it'd be nice (and Foursquare like) to see all friends' checkins on the main map together. (Update: We've heard that the map actually does show friends' checkins, so our discrepancy could come from Facebook's motions to stop this particular trick.) 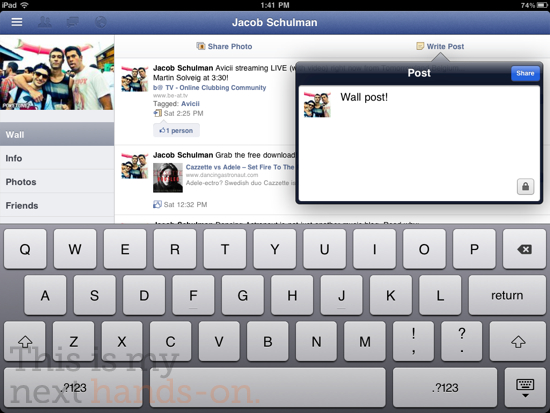 Profiles display in much of the same way as they do on the actual Facebook website, with a default photo in the upper left atop navigation tabs for wall, personal info, photos, and friends. Posting text or a photo to a friend's wall will pop up the familiar menu overlay, and ticking the "+" next to an existing post pops up a right sidebar where you can comment or like. Unsurprisingly, YouTube videos play right inline and links open within a Facebook navigation bar at the top so you never have to stray too far from your precious newsfeed. 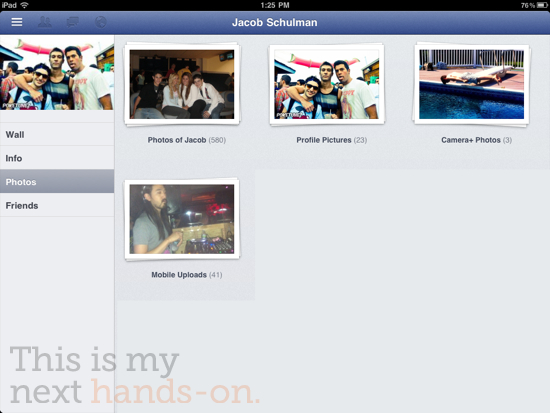 One of our most used Facebook features is Photos, which are a real pleasure to interact with on the iPad's 9.7-inch screen. Albums display much like the native photos app, appearing as piles with album titles underneath -- though Facebook's implementation lacks the nifty pinch gesture for navigating into thumbnails and instead relies on simple taps. We found some wonkiness with zooming into photos, but that's most likely a small bug that'll get squashed before this actually becomes official. Adding a comment is once again done by menu overlay, and there's a nice album overview of tiny thumbnails along the bottom of the screen for quickly navigating to any photo in an album. 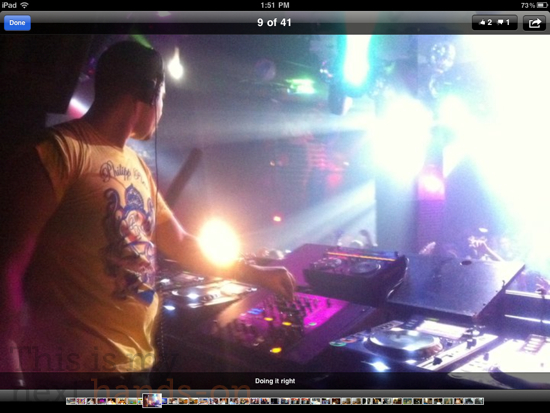 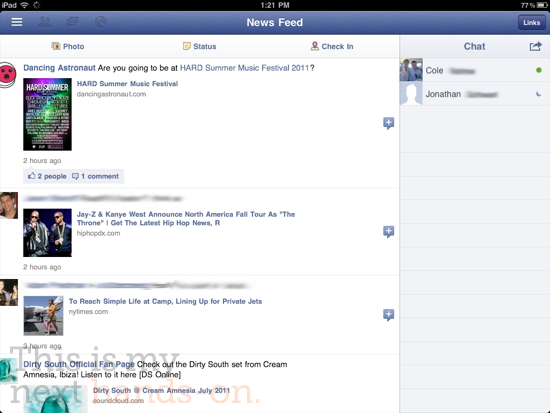 Facebook Chat is the last major feature to discuss, but we couldn't get our buddy list to appear after it briefly appeared upon first launch. What we did see was the standard buddy list along the right side of the screen, though it unfortunately lacked options to trigger online / offline states for various friend lists. There's been quite a bit of backlash from Facebook's updated chat interface on the desktop side, and it's fully possible that the company is tweaking how the new buddy list will work via mobile. It could be a killer feature if done right, and with iOS 5's robust notification implementation, might even give iMessage a run for its iOS-only money.

Facebook's iPad offering certainly looks to be a welcomed addition to a world previously cluttered with third party solutions that lacked the official iPhone app's finesse. Standard navigation schemes and user interface ideologies permeate the various functions, resulting in an application that seems easy enough to pick up and use. We have no doubt that whenever it does get official, it'll become yet another time waster in our arsenal of iPad apps -- you can only play Angry Birds so many times.