Apple just quietly rolled out an update to the Apple TV and iTunes that enables purchases and re-downloads of TV shows. All of the television shows you've previously purchased from iTunes are now visible and downloadable on the Apple TV, complete with little iCloud icons next to them, and there's a new Purchased tab for TV shows on iOS devices and the desktop iTunes store as well. We just updated our Apple TV to the new 4.3.3 build and things work as expected, although you'll find reason to shake your fist at the studios over irritating and inconsistent content restrictions: some shows offer both purchases and rentals for seasons and individual episodes, while other shows only let you purchase entire seasons. And this all appears to be limited to the US only, which stings. Still, it's a nice update that addresses one of the biggest knocks against the Apple TV -- now we just need some support for purchased movies as well.

P.S.- We're also hearing the update adds Vimeo support, but we haven't tried that out yet -- we'll let you know. 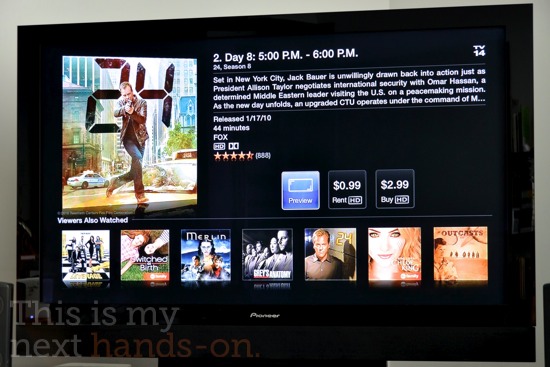