Compaq Mini will be Verizon's first LTE netbook, cost $449.99 on contract this Thursday

Share All sharing options for: Compaq Mini will be Verizon's first LTE netbook, cost $449.99 on contract this Thursday 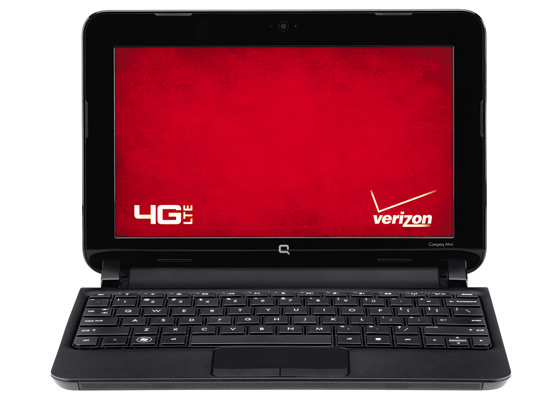 Verizon may already have its first LTE laptop in the shape of the HP Pavilion dm1, but that bad boy costs a cent under $600 (with no subsidies in sight), so it's reasonable to expect that the company had a gap to fill in the range of products that can exploit its still nascent 4G network. That's where the grandiosely titled Compaq Mini CQ10-688nr enters, at a $449.99 price point when signing up for a two-year data agreement and touting all the typical netbook specs you know and love. An Atom N455 runs Windows 7 Home Starter at 1.66GHz, there's a 10.1-inch matte screen offering a 1024 x 600 resolution,  and 1GB of DDR3 RAM is accompanied by a 250GB HDD in the storage department.

Promised data rates vary between 5Mbps and 12Mbps on the downstream and 2Mbps and 5Mbps when uploading -- typical Verizon LTE speeds, in other words -- and prices go from $30 a month for 2GB of bandwidth to $80 if you need a more generous 10GB allowance. Verizon will start selling the new Compaq Mini in its online store this Thursday, August 4th.