Share All sharing options for: BlackBerry Torch 9850/9860 is 'all-touch,' coming this year 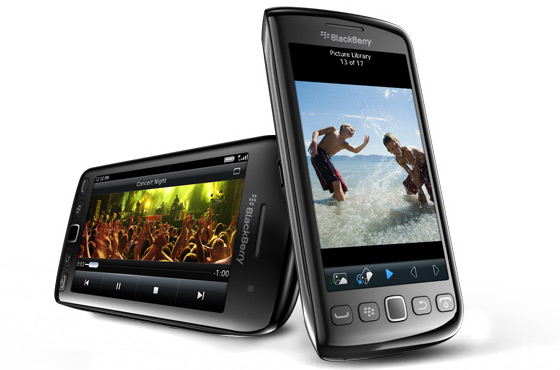 RIM's BlackBerry 7 OS family is growing pretty rapidly today, as the addition of the Torch 9810 has been augmented with the introduction of a new touchscreen-only model. The all-touch Torch is split into two SKUs, a 9860 for GSM carriers including AT&T, Telus, Rogers, and Bell, and a 9850 for the CDMA networks of Sprint and US Cellular. The 3.7-inch, 480 x 800 display on offer here is the biggest yet on a BlackBerry smartphone, though the internals align closely with the rest of the BB 7 crew. There's a 1.2GHz Qualcomm MSM8655 processor with Liquid Graphics, 720p video recording, 768MB of RAM, built-in GPS, an accelerometer, and a 1,230mAh battery. "Zero" shutter lag is promised from the 5 megapixel camera on the back, which is also capable of continuous autofocus.

The only thing you must be wondering now is when all this will be hitting retail, which is where AT&T helps us out (a little) by saying the Torch 9860 is "planned for 2011" alongside the original BB 7 device, the Bold 9900. Oh, and the 9860 will be denominated as a 4G handset by AT&T, though the same warning applies here as does with the 9810: we're probably talking about simple old 14.4Mbps HSDPA. Hit the source link to learn more about RIM's storming new device.