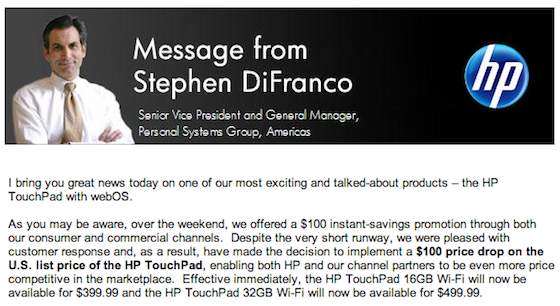 HP execs told us they would stop at nothing to be #2 in the tablet space, and this last weekend the company offered some deep discounts on its flagship HP TouchPad to get the ball rolling. If you missed the $100 discount, though, don't fret -- HP's Stephen DiFranco just made that deal permanent. Rather than have its 10-inch tablets attempt to go head-to-head with the iPad 2 at $499 and $599 price points (for 16GB and 32GB, respectively), the company's publicly decided to compete on price from here on out, and that means that you can pick up a 16GB HP TouchPad for $399 (or 32GB for $499) on HP's website right now. We'll say it again -- with both a substantial price drop and a sizable software update under the TouchPad's belt, it's not a bad deal. [Thanks, Simos]