HTC Bliss shows up in leaked pictures and hits the FCC

Share All sharing options for: HTC Bliss shows up in leaked pictures and hits the FCC

What started as a phone being tested with female focus groups across the country back in April, now seems to be inching towards becoming a real-life smartphone aimed at the ladies. Sure, the HTC Bliss hasn't had its official unveil yet, but today's leaked images obtained by PocketNow and its FCC drop-by seem to be the last steps before it gets one. The shot above looks incredibly similar to our original mock-up, including that "calming" seafoam green hue. However, it also interestingly confirms that the HTC phone that recently just passed the FCC is in fact the Bliss. The filing itself was vague, and we were unsure if it was HTC's Bliss or Vigor. However, the backside of the Bliss matches up to the FCC diagram (pictured below), and thus confirms that the lady phone with its CDMA / EVDO 850 and 1900 bands is headed to Verizon. Looks like there's no turning back for HTC and Big Red with this whole Droid for women thing, now let's just hope that cool charm accessory comes along for the ride and the marketing isn't a total bust. 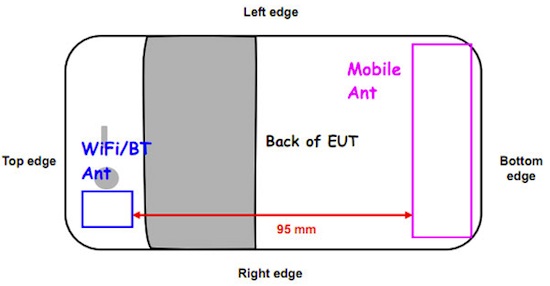