Share All sharing options for: Google and Motorola: Independence Day or Doomsday? 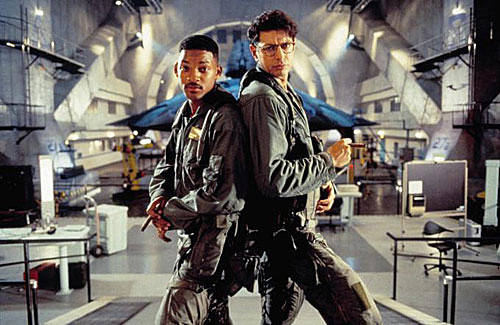 Since Google made its intentions known that it would acquire Motorola's Mobility division (the arm of the company behind its smartphones and tablets) for a cool $12.5b, speculation about what the deal really means has run rampant in the tech community. Based on the announcement post Larry Page penned on Google's official blog, it was clear that there are at least a couple of reasons why the folks in Mountain View would want to have their hand in Motorola's business. The first and most obvious one being that it badly needs some of the company's patents to fend off recent attacks from small competitors like Apple, Oracle, and Microsoft.

But that's probably not the only reason Google wants or needs Motorola — at least if you've read the tech press in the last few days, that's what you would believe. So what are the possible outcomes of this relationship? If Google only needed the patents, why did it choose to purchase the entire company instead of licensing what it wanted (as Nilay points out in this piece)? If Google desired something more, like, say, a hardware business of its own for making Android products, how can it keep things copacetic with partners like HTC, Samsung, and LG? Or is there another, more / less nefarious reason the search giant suddenly has an appetite for RAZRs and set-top boxes? After a long, hard think about what this all really means, I've arrived at only three real outcomes for this union. Want to know how they look? Read on.

Scenario 1: Google's only in it for the patents

Larry Page stressed in his blog post that Motorola would remain "a licensee of Android and Android will remain open," adding that the company plans to "run Motorola as a separate business." Andy Rubin, who heads the Android arm of Google reiterated those sentiments on a call just following the news, citing the process for how the company chooses its flagship phone as an aspect that wouldn't change when Motorola became part of the family. Common wisdom is that Google really needs to combine Motorola's patents with its own to create a magical barrier around Android that keeps the Cupertino meanies at bay. Something akin to whatever the aliens use to keep out our nukes in the film Independence Day.

Okay, so let's take this at face value. In the coming years, Google does nothing to bring Motorola further into the fold. The company gets the power of Moto's patent catalogue, but continues to keep the phone- and tablet-maker at arm's length when it comes to internal projects — purposely keeping its hands off of the hardware. Motorola doesn't produce hardware side-by-side with the Android team, and Google doesn't lean on Moto's engineers when it cooks up future versions of its software.

Keeping middle managers and engineers away from one another when they're working on parallel projects will practically be a business unto itself, but Google will do it because it has to. Right? So Motorola hobbles along as an autonomous, barely-profitable hardware business, and Google eats the costs because... well, it can.

Besides, if you're saturating the market the way Google is right now, you don't exactly go and toss that in the bin just to try and emulate companies like Apple.

In this world, Samsung and HTC don't revolt because suddenly they're protected by Motorola's patents (instead of being threatened by them), and because Google isn't playing favorites even though it seemed like an easy thing to do. Motorola suddenly goes from OEM on a downswing to protected entity within one of the most successful tech companies in the business. Everyone walks away happy. There is truth in advertising.

Some people in the tech community think that Google just made its most awesome and radical power move since figuring out how to beat Alta Vista at the search game. Acquiring one of the leading phone-makers in the industry suddenly gives the company the ability to go toe-to-toe with Apple on levels heretofore undreamed of. According to those in the know, Larry Page is not content to just be in control of nearly every phone's operating system and every search query in the known universe — he wants to make hardware too. If you believe what you read, the man is a megalomaniacal super-CEO who not only wants to sculpt the software and services you use, but also the devices you use them on. The thinking is that Google acquired Motorola so it could begin cranking out tightly integrated hardware along with its Android (and presumably Chrome OS) software, thus totally raining on Apple's parade, and making a mockery out of Nokia and Microsoft's unholy union.

In this, our second and possibly most terrifying future, Google would endeavor to merge the hardware team from Motorola Mobility with its own in-house engineers, allowing the company to iterate more quickly and cleanly on the Android platform thanks to the direct, internal link to a target device. But the big question is how partners would react. Most people believe that Google would have a revolt on its hands if it suddenly adopted Motorola as its native hardware-maker and began to play favorites, as would inevitably happen. But is that as true as Microsoft hopes it is?

Maybe, but maybe not. Right now, companies like HTC are essentially paying a tax on Android phones they sell thanks to patents owned by Microsoft which they have to license. If the patents held by Motorola — when combined with those Google already has — would somehow protect them from having to hand over money on every handset they made, would they be bothered by Google's relationship with its hardware arm? HTC and Samsung (amongst others) are flourishing in the smartphone game thanks to Android — would they give that market position up over bruised feelings? Does a closer Motorola / Google union even ensure that the game would change? That remains to be seen.

Sure, companies like Apple and Palm couldn't pull off the role as OEM and licensor — but Google is a different company and we're living in a different world. Right?

This scenario is still the most interesting, because Google has never really ventured into the hardware arena. The Nexus One, Nexus S, and Chromebooks are about as close as the company has gotten to integrated products, but even those were made with the help of partners. What does a company like Google do with a hardware process that doesn't allow for "beta" anything?

Scenario number three is a little like our first take, save for one small detail: Google doesn't love or even really care about Motorola's hardware business. Not even enough to keep it around. The endgame for the company was to acquire patents, enough of them and the right ones to make sure Android would have a long and prosperous life.

Rumor has it that Motorola all but backed Google into a corner on the acquisition — even entering into talks with Microsoft recently on the same kind of deal. Instead of giving up licenses to the patents themselves, it forced Page and co. to buy the company outright. But with those patents in hand, what does Google need with a hardware company that's seen better days (and certainly higher profit margins)?

In a word? Nothing.

So what would Google do if it got all that it needed from Motorola in the way of patents? The crude answer is layoffs and selloffs until there's no more dead weight left. The only choice Google would have if it didn't want to own or operate a hardware company would be to pick apart the most appealing pieces of Motorola's business and sell them to the highest bidder — likely after cutting a healthy amount of the nearly 20,000 employees on the company's payroll. That fact of the matter is that Motorola's big, noisy, expensive hardware business could be a real liability to a company that lives and thrives on the web, where low overhead and almost-infinite flexibility have allowed Google to flourish. In this case, Google is simply strip-mining the pieces of Motorola it can use, and working to make back some of the cash it laid out for the acquisition.

Keep in mind that the people in control of Motorola right now will walk away from this deal with cash in their pocket, and not an insignificant amount.

If this all doesn't make sense, consider these facts: Motorola's marketshare has been on a steady decline for the past few years, even with the introduction of a handful of popular Android handsets. According to comScore's rankings, in just a year (March 2010 to March 2011), Motorola slipped from 21.9 percent of the cellphone market to just 14.5 percent. Meanwhile, Samsung and LG continue on an upward swing. If the trend keeps moving in the same direction, you could argue that even without Motorola, Google has plenty of thriving partners building its hardware. Consider its last two flagship phones... made by HTC and Samsung.

Also keep in mind that Google makes its money on ads, not products. Selling ads requires broad reach. Google targets the ads (and thus makes them more valuable) by collecting data from users. Any scenario that doesn't support that model is not likely to be pursued.

This potentiality is easily the darkest, yet somehow feels the most true. It's going to be hard to run this "separate business" honestly with the partners and goals that Google seems to have, and adding another 20,000 employees to a current staff of 29,000 is an expensive undertaking — especially when no one has explained exactly how this makes anybody more money. The sad fact is that a Motorola / Google partnership where everything stays as-is or even expands is hard to see functioning in any light. They are two very different businesses with two very different goals, joined now only by a single shared interest: keeping the wolves at bay.

If Google got what it wanted, and Motorola board members got a payday — is there anything else left?

It's only a dream

Of course, this is all speculation right now. Google hasn't really stated any intentions beyond what Larry Page included in his brief note about the acquisition, and though everyone in the tech world seems to have a take (yours truly included), it's really just a guessing game.

One thing is certain, however. The merger of these two companies marks the beginning of a big, new chapter in the book of 21st century business, one in which twists and turns aren't just expected — they're assured. Whether or not this is the penultimate point for Motorola in the novel, or just a way station along the road... well, your guess is as good as mine.