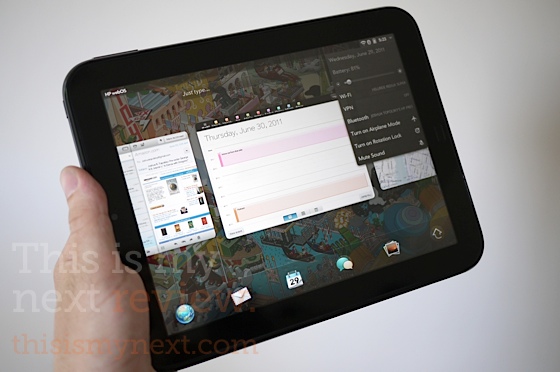 Just 16 months after announcing the acquisition of Palm, HP has said today that it will "discontinue operations for webOS devices," saying that the units (presumably the TouchPad, Pre series, and Veer) have "not met internal milestones and financial targets." What this means for existing stock of the slow-selling TouchPad and the brand new Pre 3 is unclear, but the company does say that it will "continue to explore options to optimize the value of webOS software going forward" -- not exactly rosy language for webOS' future as a consumer platform. In fact, it seems like a strong possibility that HP is done with webOS altogether -- it'd be an odd play to keep it relegated to printers and the enterprise side of the business if it's not going to be involved on the device side. Licensing to third parties remains a possibility, but we haven't heard anything on that front.

Ex-HP CEO Mark Hurd famously said in the wake of the Palm acquisition that it hadn't bought webOS "to be in the smartphone business," and it'd seem he's finally gotten his way -- though it would seem that his dream of deploying webOS on countless other HP devices ranging from printers to PCs would be in dire jeopardy at best.

In fact -- as reported earlier -- HP is looking at "strategic alternatives for its Personal Systems Group" up to and including a spinoff. PSG includes the company's desktops, laptops, hard drives, and webOS products, so this basically confirms HP's intent to get out of the hardware game and move in the direction of software and services.

Needless to say, this makes the upcoming earnings call much more interesting, so be sure to stick around for our liveblog. See the full press release -- plus a roundup of all our coverage of HP, Palm, and webOS -- after the break.

Update: The other part of the HP rumor mill today -- the acquisition of software firm Autonomy -- is now official, which definitely advances HP's position as an enterprise player... and moves it further away from the consumer tech business, too.

HP today commented on the recent announcement by Autonomy Corporation plc (LSE: AU.L). HP confirms that it is in discussions with Autonomy regarding a possible offer for the company.

HP also reported that it plans to announce that its board of directors has authorized the exploration of strategic alternatives for its Personal Systems Group (PSG). HP will consider a broad range of options that may include, among others, a full or partial separation of PSG from HP through a spin-off or other transaction.

In addition, HP reported that it plans to announce that it will discontinue operations for webOS devices, specifically the TouchPad and webOS phones. HP will continue to explore options to optimize the value of webOS software going forward.

HP today announced preliminary results for the third fiscal quarter 2011, with revenue of $31.2 billion compared with $30.7 billion one year ago.

For the fourth fiscal quarter of 2011, HP estimates revenue of approximately $32.1 billion to $32.5 billion, GAAP diluted EPS in the range of $0.44 to $0.55, and non-GAAP diluted EPS in the range of $1.12 to $1.16. Non-GAAP diluted EPS guidance excludes after-tax costs of approximately $0.61 to $0.68 per share, related primarily to restructuring and shutdown costs associated with webOS devices, the amortization and impairment of purchased intangibles, restructuring charges and acquisition-related charges.

HP will host a conference call with the financial community today at 2 p.m. PT / 5 p.m. ET to discuss these announcements well as HP’s third quarter 2011 financial results. The call is accessible via an audio webcast at www.hp.com/investor/2011q3webcast.

HP creates new possibilities for technology to have a meaningful impact on people, businesses, governments and society. The world’s largest technology company, HP brings together a portfolio that spans printing, personal computing, software, services and IT infrastructure at the convergence of the cloud and connectivity, creating seamless, secure, context-aware experiences for a connected world. More information about HP (NYSE: HPQ) is available at http://www.hp.com.

Use of non-GAAP financial information

This news release contains forward-looking statements that involve risks, uncertainties and assumptions. If the risks or uncertainties ever materialize or the assumptions prove incorrect, the results of HP may differ materially from those expressed or implied by such forward-looking statements and assumptions. All statements other than statements of historical fact are statements that could be deemed forward-looking statements, including but not limited to any projections of revenue, margins, expenses, earnings, tax provisions, cash flows, benefit obligations, share repurchases, currency exchange rates, the impact of acquisitions or other financial items; any statements of the plans, strategies and objectives of management for future operations, the exploration of strategic options for PSG and the execution of cost reduction programs and restructuring and integration plans; any statements concerning the expected development, performance or market share relating to products or services; any statements regarding current or future macroeconomic trends or events and the impact of those trends and events on HP and its financial performance; any statements regarding pending business combination transactions; any statements regarding pending investigations, claims or disputes; any statements of expectation or belief; and any statements of assumptions underlying any of the foregoing. Risks, uncertainties and assumptions include the impact of macroeconomic and geopolitical trends and events; the competitive pressures faced by HP’s businesses; the development and transition of new products and services and the enhancement of existing products and services to meet customer needs and respond to emerging technological trends; the execution and performance of contracts by HP and its suppliers, customers and partners; the protection of HP’s intellectual property assets, including intellectual property licensed from third parties; integration and other risks associated with business combination and investment transactions; the hiring and retention of key employees; assumptions related to pension and other post-retirement costs; expectations and assumptions relating to the execution and timing of cost reduction programs and restructuring and integration plans; the possibility that the expected benefits of pending business combination transactions may not materialize as expected or that the transactions may not be timely completed; the resolution of pending investigations, claims and disputes; and other risks that are described in HP’s Annual Report on Form 10-K for the fiscal year ended October 31, 2010 and HP’s other filings with the Securities and Exchange Commission, including HP’s Quarterly Report on Form 10-Q for the fiscal quarter ended April 30, 2011. As in prior periods, the financial information set forth in this release, including tax-related items, reflects estimates based on information available at this time. While HP believes these estimates to be meaningful, these amounts could differ materially from actual reported amounts in HP’s Form 10-Q for the quarter ended July 31, 2011. In particular, determining HP’s actual tax balances and provisions as of July 31, 2011 requires extensive internal and external review of tax data (including consolidating and reviewing the tax provisions of numerous domestic and foreign entities), which is being completed in the ordinary course of preparing HP’s Form 10-Q. HP assumes no obligation and does not intend to update these forward-looking statements.