Microsoft plans to give away a new quad-core tablet, will it run Windows 8?

Share All sharing options for: Microsoft plans to give away a new quad-core tablet, will it run Windows 8?

It's been a while since Microsoft flashed a mysterious slate in front of a crowd, but it's resurrecting that old trick at the TechEd conference in New Zealand this week. Microsoft Enterprise Strategist Jeff Johnson took the stage in the "Windows device session" to talk about the company's upcoming tablet strategy and showed off not one but two tablets. The first -- and the most intriguing -- he proclaimed to be a "quad core Windows Slate that will be give(n) out at an upcoming Microsoft event." What event could he be talking about exactly? Well, syncing up with information we've heard from our own sources, we'd say it is very likely that he is referring to Microsoft's BUILD Conference in early September, which will focus on Windows 8. Similarly, we've heard that the guys in Redmond have indeed been prepping a Windows 8 development tablet for the event. We haven't heard exact details on the quad-core part, but we'd venture to guess that it's an ARM CPU given the thinness of the tablet and the lack of any ultra-low voltage quad-core x86 chips. (And let's not forget that Kal-El is planned to arrive around the same time.) Johnson also flashed a second chunkier tablet with a removable battery, which looks to be Fujitsu's Windows 7-powered Stylistic Q550 (see how those match up in pictures below). We'll be keeping a close eye on this one and will be on the ground at BUILD in early September to bring you all the details. 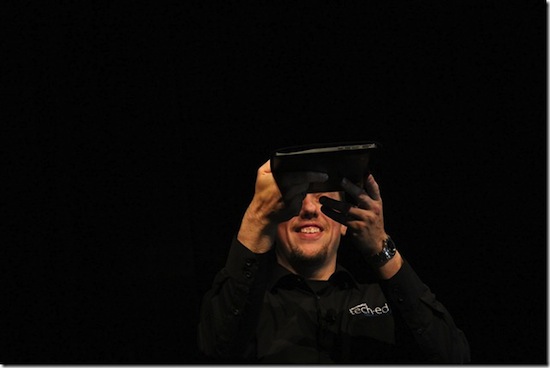 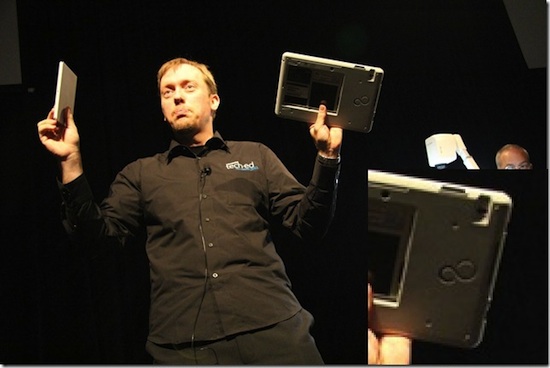 Check out this picture of the Fujitsu Stylistic Q550 for further proof.