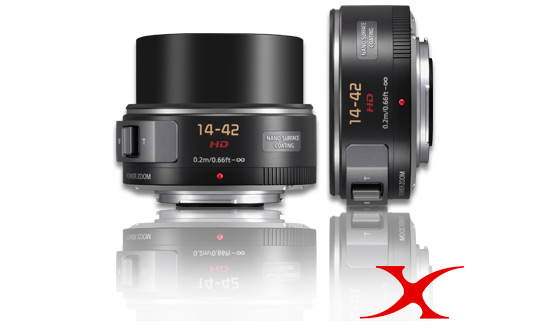 Panasonic's Lumix G X Vario PZ 14-42mm Micro Four Thirds lens has been announced today, combining the zoom versatility of its predecessor 14-42mm glass with the size of the company's 20mm pancake lens. The reduction in size has been achieved by discarding the manual zoom and focus rings in favor of a collapsible design -- much as you'll find in a regular point-and-shoot camera -- though more premium features like optical image stabilization and a "Light Speed" autofocus of just 0.1 seconds have been retained. That speed rating is when used with the GF3, which will form a new Lumix GF3X kit with the new X lens, available in black or in silver for $749.99 in October. By itself, the lens will cost $399.99 and be compatible with the GF3, GF2, and G3 Micro Four Thirds cameras following a firmware upgrade.

Also introduced today is the Panasonic Lumix FX90. A mostly unremarkable point-and-shoot affair, it comes with 802.11n Wi-Fi and a Lumix Link app for Android and iOS, permitting hopefully seamless uploads of your pics and flicks to services like Flickr, Facebook, Picasa, and YouTube. Outrageously, there's no mention of Twitter. If you can stomach that omission, you'll also want to know the FX90 has a 12-megapixel CCD sensor, can shoot 1080i video at 60fps, and will be available in the fall (pricing has yet to be revealed).

You'll find an early preview of the 14-42mm pancake lens at dpreview below and full details of Panasonic's other announcements today, including the FZ150 superzoom (24x), at the other links.