Images of the next version of the QNX-based operating system for RIM's BlackBerry PlayBook look to have leaked on MaxPDA. Assuming they are legit, the big takeaway comes from the settings app, pictured above. It indicates that RIM is finally going to add native email, calendar, and contacts solutions -- but it also implies something more ominous. While you can add Exchange ActiveSync, IMAP, POP, CalDav, and CardDav accounts, it doesn't look like you can add BlackBerry Exchange Server or BlackBerry Internet Server accounts. That's right, while RIM is finally adding native email support to the PlayBook, it may not be adding BES or BIS support. That matches up with previous rumors that the QNX-toting BlackBerry Colt wouldn't support BES because it's "extremely difficult" to get it working on QNX. In short, BlackBerry Bridge isn't going away anytime soon, but at least the PlayBook will be a bit more palatable to non-BlackBerry users.

To help that bitter pill go down, check out the screenshot after the break showing the icon for the Android App Player and what may be native BBM support. An earlier rumor had suggested a September launch for the OS. Then again BlackBerry DevCon is in October, a timeframe that might give those crazy Canadians a bit more time to finish development before making it official. 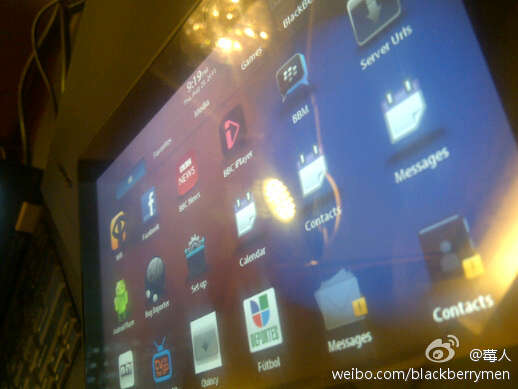