Samsung Galaxy Tab 7.7 pulled from IFA show floor (before and after pictures)

Share All sharing options for: Samsung Galaxy Tab 7.7 pulled from IFA show floor (before and after pictures)

At IFA this year, Samsung launched the Galaxy Note, the Wave 3, and the Galaxy Tab 7.7. As of today, only two of those three devices are still standing inside the company's cavernous booth at the show. We've confirmed that all Galaxy Tab 7.7 sample units have been removed from the view and reach of both public and press, with related posters and insignia also being stripped out. It's as if the tablet never happened.

You'll recall from our hands-on pictures and video with the Galaxy Tab 7.7 that it bore a big bold sticker advising that it's "NOT FOR SALE IN GERMANY." That may well prove to be the key piece of evidence when trying to deduce why the slate has today disappeared from IFA's premises. Samsung is presently subject to a preliminary injunction issued in Germany prohibiting it from selling the Galaxy Tab 10.1 because of its supposedly unlawful similarity to Apple's (registered) iPad design.

The initial labeling looks to have been Samsung's attempt to circumvent the injunction by clearly identifying the Tab 7.7 as a device that won't be sold locally, but -- whether caused by Apple lodging another complaint or the German authorities enforcing the ruling with extra zeal -- the fact is that Samsung has thought better of it and completely pulled the device. Which is a shame. IFA attendees deserve to see the Tab 7.7's magnificent display in person, no matter their nationality.

Samsung staff on the ground told us that the company hasn't yet decided when or if it'll release the Galaxy Tab 7.7 in Germany, but the global launch is still very much on. We've reached out to more senior Samsung PR folks for official comment on the matter. In the mean time, feel free to check out Florian Mueller's take for some more context on the related legalities, or our before and after pictures of Samsung's stand -- available after the break!

Update: Bloomberg confirms that Apple was granted a second injunction from the same Dusseldorf court on September 2nd blocking the sales and promotion of the Galaxy Tab 7.7 in Germany. Samsung spokesman James Chung said it will respect the court's decision even though it "severely limits consumer choice in Germany." As expected, Samsung will pursue all available options to overturn the decision. 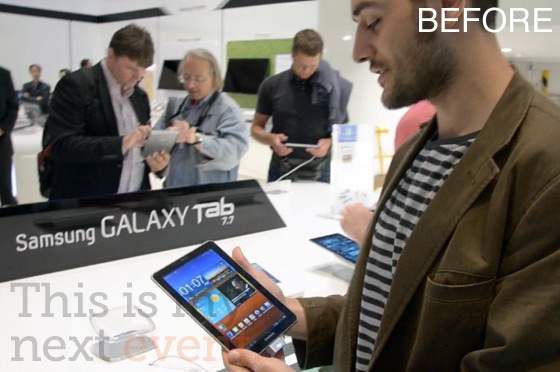 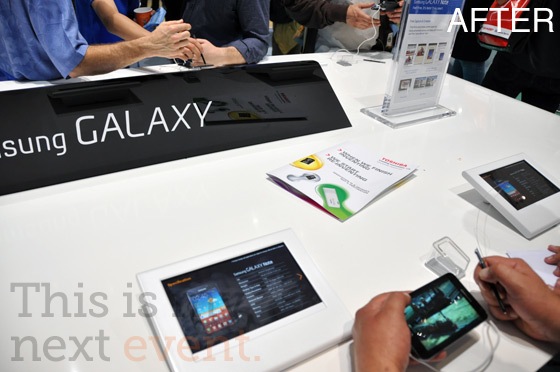