Could Windows 8 let you call and text your relatives directly from your "Metro-style" tablet? That's what a raft of new evidence suggests, as istartedsomething discovered that two videos from Microsoft's Build developer conference have a variety of references to telephony. You can see a "Missed calls" tile on the home screen in the picture above, and in a second video, there's a contact info screen with options to "Text and Chat" (including SMS) as well as the telling "Call mobile."

Mind you, all of this evidence could be explained in a variety of other ways. For instance, SMS is explicitly called out as a "fallback" option in a video describing Windows 8's integrated messaging app, which could mean that Microsoft is just simply extending the current SMS for Windows Live functionality there. Perhaps, like the sync functionality in HP's Pre 3 and TouchPad, you'd need to have a Windows Phone 7 device paired and physically next to your Windows 8 PC to make or receive calls and text messages. In fact, with Windows 8's focus on cloud sync, notifications might not be any more than that -- your Windows Phone 7 device could simply pass a note to Windows 8, via the internet, that there are some telephone duties you should get to. Still, the inclusion of "Call mobile" leads us to think there's something more here -- assuming these aren't all mockups, anyway.

One last thing to keep in mind is that Microsoft is in the process of purchasing Skype -- it's hard to imagine a world where Skype functionality wouldn't be a first-class citizen in the brave new Metro universe. The second slide and video from which it came is after the break -- the action starts at around 2:30. 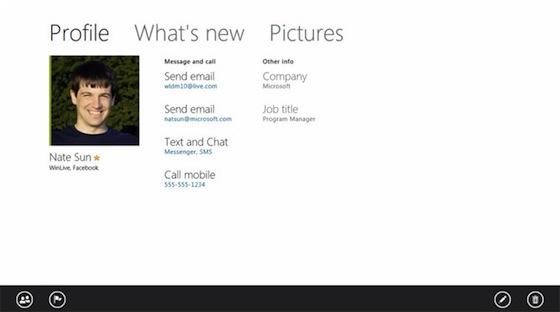