At MWC in February this year, Nvidia promised the world that quad-core tablets and smartphones would be shipping by August, featuring its next-generation Tegra processor, codenamed Kal-El. Alas, September has arrived and the state of the (shipping) art remains dual-core, though Nvidia remains in high spirits about Kal-El's world-beating potential.

In the place of actual devices, the company has today provided us with two whitepapers detailing more of Kal-El's architecture and internal workings. The major highlight among those papers is the revelation of a heretofore unknown fifth processing core -- a lower-frequency unit that functions independently of the four "power" cores, whose sole responsibility will be to keep your device going through less intensive tasks like reading, audio playback and light web browsing. Dubbed a companion core, it comes on when the processing power of the four central cores isn't required, allowing the system to turn them off completely and save up on battery use. Although Kal-El isn't capable of asynchronous operation (i.e. every one of the four non-companion cores runs at the same speed), Nvidia can turn individual cores on and off, leading to a pretty awesome power hierarchy. You can have just the companion core, or one, two, or all four of the chief processing units turned on at a time. Skip past the break for a graph showing the possibilities and keep hoping that there'll be no more delays on Nvidia's roadmap, which today places retail availability of Kal-El devices in the latter part of 2011. 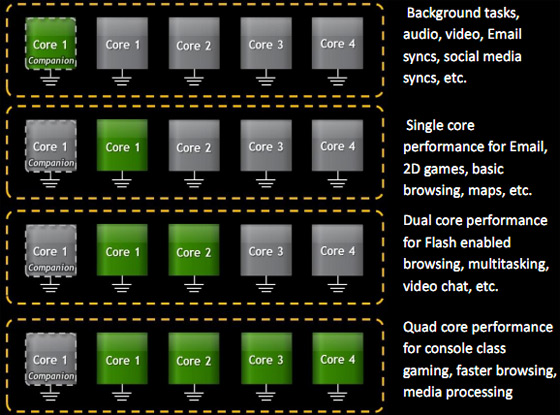 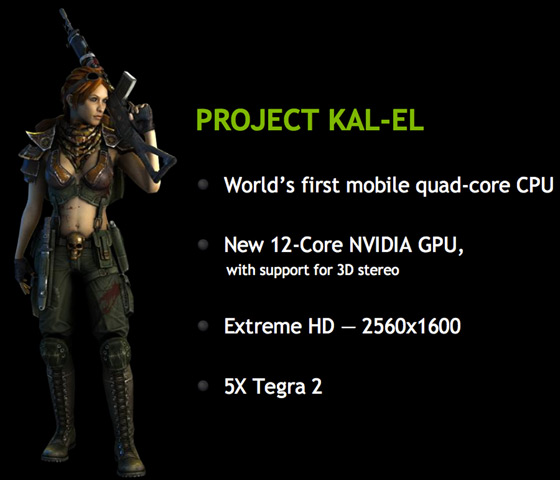