When Facebook announced the Timeline today at its f8 developer conference, I was blindsided by the introduction of a completely new Profile. Mark Zuckerberg's emotional delivery made it clear that this is going to fundamentally change a website that most of us use for hours every single day — so there's a lot riding on its success. I've been exploring the new layout for some time tonight, so let me take you on a tour of Timeline, which is like an online yearbook for your life.

While Timeline's official rollout won't take place for a few weeks, it's possible to get early access by registering as a developer. After you go through the process and enable the beta feature, you're presented with a warning: Facebook gives you one week to clean up your Timeline before it is visible to all your friends. If you're a long-time user there's likely a lot of potential blackmail material that could surface, so you should take advantage of the grace period to star, hide, and delete everything you've accumulated over the years. That's another important thing to mention right off the bat: Timeline will hold more meaning for those who have been using the service longer, and newer Facebook users might feel lonely at first. 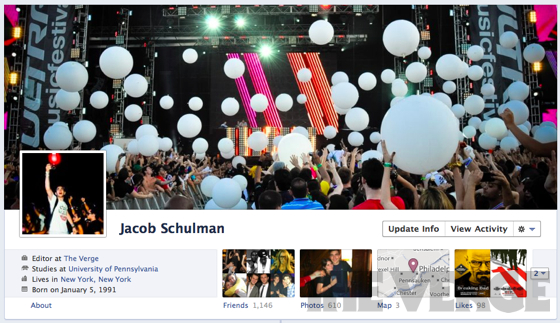 The top portion of the timeline is called the Cover (seen above), and has personal information on the left along with your friends, photos, and Likes. There's a large space at the top for a lead photo, while your standard default is confined to a smaller overlapping box. It looks tight and sharp, and feels like a book cover you might flip open. 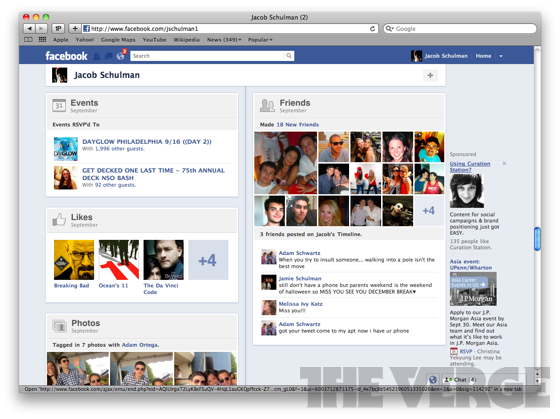 Below the Cover is the heart of the Timeline: a prime meridian with in-line date markers that serves as a dock for all your "stories" — the activities you do on Facebook. While the old profile presented updates chronologically and stacked on top of each other, the new design splits it in two columns — meaning even more stuff with less scrolling. Staggered story sizes and locations make it feel authentic and spontaneous, while large photo previews are inviting as well as click- and touch-friendly. 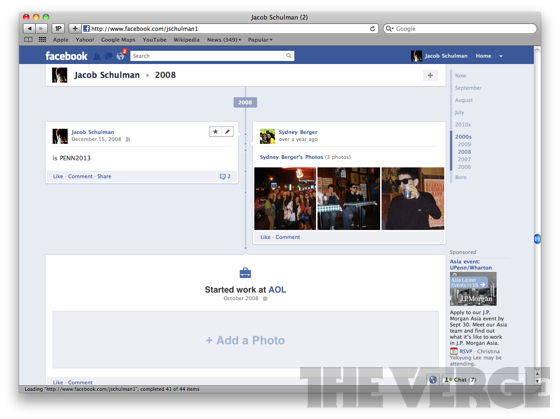 Of course, the Timeline doesn't show everything you've ever done on Facebook, but in my brief testing it did a nice job of summarizing my past. For example, when I clicked on 2008 I was presented with the status update from when I got accepted to Penn, updates from when I first started at Engadget, and memorable photos from that year. 2007 was filled with even more photos from a summer trip, event history, and the reminder that I made 208 friends (go me!). I haven't begun drilling down on a month-by-month basis yet, but it's sure to get nostalgic.

That's the thing about the Timeline — you'll just keep scrolling. That's why there will likely be a built-in grace period for users to get acclimated, because the initial backlash is sure to be thunderous. I already spend way too much time on Facebook, and have a suspicion that as my friends publish their own Timelines I will be spending even more. I also have a suspicion that "Facebook Stalking" will be more popular than ever, since it cuts out the boring, meaningless updates automatically. The current week-long adjustment period for developers may not be long enough for many long-time users to get through everything with a fine-toothed comb, and they may regret not doing so early on. 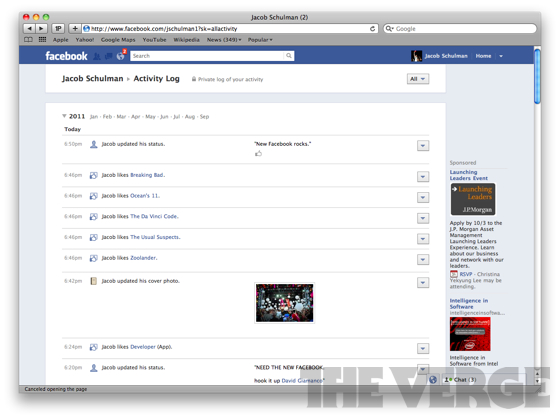 Another slightly unsettling part of the Timeline is its Activity Log. Accessed by hitting the large "view activity" button on the Cover, this is where every single thing you do on Facebook is saved and recorded. It kind of resembles the old profile, and keeps the recently-added inline privacy controls for each story. I do think Facebook could be a bit more up-front in their display; some sort of indicator for content that's public or private would be more transparent than hiding it in a drop-down menu. You can still delete posts individually, but it's slightly scary to think about how many entries will be made to this log every single time you sign on.

This is just a short walkthrough of Facebook's Timeline, and I didn't even touch upon the new Social Apps that hook into it. Facebook is clearly putting the framework in place to become your ultimate online hub, and it's looking to personalize it and socialize it to keep you from going anywhere else. Only time will tell whether the Timeline will be a hit with users, but our online lives are about to change and there's not a whole lot we can do about it.