Sure, we just brought you details on the 4.3-inch Droid RAZR (or Spyder), but now we're hunting bigger game -- like a 10.1-inch Motorola Xoom 2 that's just 9mm thick. That's still a hair thicker than the iPad 2's 8.8mm frame, but our trusted source says this Xoom successor will have an unspecified dual-core 1.2GHz processor, come with 1GB of "faster" RAM, record 1080p video, and still supposedly get eleven hours of battery life compared to the original model's ten. There's an optional keyboard case planned, in addition to a stylus pen, though our source couldn't tell us whether the HD screen has an active digitizer or if it just transfers the electricity to your finger.

Our mole did, however, spend some time talking up some special software deals -- the Xoom 2 is scheduled to be the first tablet to ship with Adobe Flash Player 11, stream Netflix in HD (are we looking at an OMAP 4?), and may wirelessly sync to your PC with some new apps that Moto's cooking up in-house. Last but not least, we're hearing the Xoom 2 will have a built-in IR blaster and some sort of home automation software may be ready for launch. We don't have much more than that, but when we find out, you'll be the first to know!

Update: Looks like Engadget's got the clearest pictures of the Xoom 2 and its smaller sibling yet -- according to their tipster, both devices have LTE modems. See one such photo after the break! 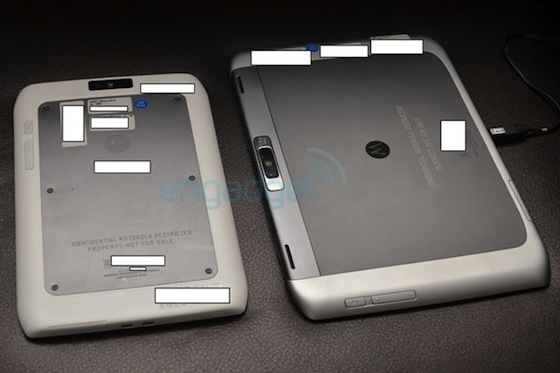