Two Android smartphones, the Amaze 4G from HTC and the now familiar Galaxy S II from Samsung, are all set to become T-Mobile's first 42Mbps-capable handsets. The pair will be available to buy online on October 10th and in stores on October 12th, costing $259.99 and $229.99, respectively (after a $50 mail-in rebate and in conjunction with a two-year service agreement). Though their maximum throughput is rated at 42Mbps, T-Mobile informs us that in practical use these phones are exhibiting average speeds of around 8Mbps, with peaks of up to 20Mbps. Still nothing to scoff at.

In terms of specs, The Amaze 4G combines the advanced 8-megapixel camera found inside the myTouch 4G Slide with the 4.3-inch qHD screen of the Sensation, giving T-Mo users a sort of middle option between those already available devices. The press release describes the 540 x 960 screen as a "super LCD," however we expect it to be the same standard LCD panel as in the Sensation -- there are no Super LCD displays capable of that resolution yet, as far as we're aware.

1080p video recording is a shared feature between the Amaze 4G and Galaxy S II, as is the dual-core 1.5GHz Snapdragon S3 processor. Also included in both is an NFC radio, facilitating all the fancy contactless communications that Google considers integral to Android phones, as well as mobile payments "in the future." The Galaxy S II also comes with a pretty terrific 8-megapixel camera of its own, though its 4.5-inch screen may end up feeling a little too big for the frugal 800 x 480 resolution. For more on that device, feel free to peruse our Galaxy S II Epic 4G Touch review from earlier this month -- it's the Sprint variant of the same handset. We'll be endeavoring to get some hands-on time with T-Mobile's Galaxy S II and Amaze 4G as soon as possible, stay tuned for more!

Update: T-Mobile CMO Cole Brodman just pulled out both devices on the Mobilize 2011 stage -- see a picture of that after the break! 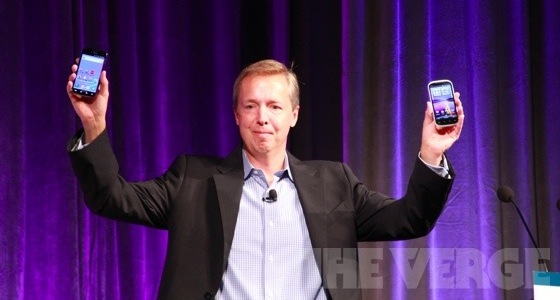