It's been a morning of Amazon surprises, but amongst all the news of cheaper and Touch Kindles, there's no doubt that the brand new Kindle Fire has us the most intrigued. Unfortunately, Amazon is being quite strict about actually letting us touch the 7-inch tablet and that glorious IPS display, but hit the break for some live shots, video, and our early thoughts from watching the demos.

Just like the early leaks predicted, the Fire does in fact look a lot like the BlackBerry Playbook in terms of raw hardware design. And that's absolutely not a bad thing, since it is one extremely clean looking device. No glossy plastics (eh hem Acer and Samsung) or distracting patterns. And other than a Micro USB port for charging, a 3.5mm headphone jack, and some speakers on the bottom there are no other ports -- no, SD card slot, no HDMI, no camera. I didn't actually get to hold the device, but I did get to feel the grayish rubber back, and well, it feels soft.

But the first thing anyone is going to notice about this thing is the 1024x600-resolution, 7-inch IPS display. For $199, it just looks downright impressive. As you can see in the video below, touch is very responsive and the viewing angles are quite wide. I had no problem taking shots from the side and seeing the demos from drastic angles. Seriously, seriously impressive stuff.

But the hardware is the smallest part of the story here. To say, Amazon has done a bit of work on top of Android is large understatement. Just like the Nook Color, there are very few traces of the Android 2.3 you are familiar with, though they do start to pop up as you dive into the browser and Settings menus. Speaking of the Nook Color, there are some definite similarities in UI. The homescreen consists of two bookshelves -- the top is a carousel of your personal media (books, movies, music) and the bottom houses your apps. It all seems to work very, very fast thanks to the 1GHz dual-core OMAP 4 processor inside. Unfortunately, that's all I can really tell you about how the OS works since the executives here are sticking to tight scripts and demos. However, the tabbed, WebKit Silk browser does seem to load pages quite fast, even over the crappy WiFi in the event space. That said, gestures seemed to be slow to react in one of the brief demos we got. The tablet, as we learned in the presentation, will come with Amazon's Android App Store and access to all of Amazon's media services.

So, what's our real first impression? It's obviously too early to tell if the Fire is the iPad murderer that all have pinned it to be, especially considering we haven't even been able to get it in hand this morning. However, for $199, it's certainly looking very very impressive from the short distance we've been told to stand from it today. 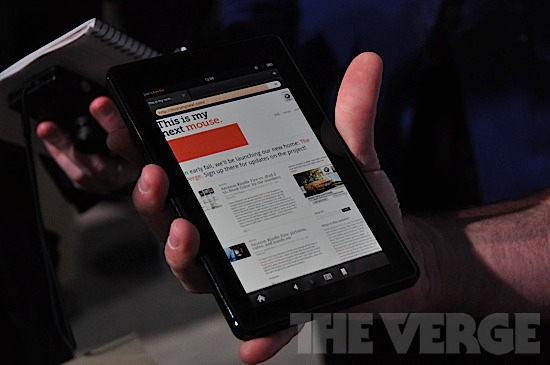