Editorial: The Kindle Fire, the iPad, and what tablets are good for

Share All sharing options for: Editorial: The Kindle Fire, the iPad, and what tablets are good for 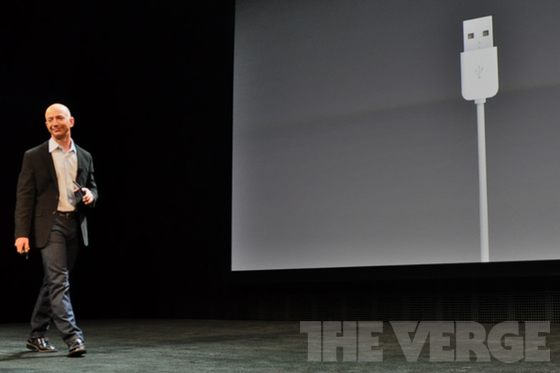 It wasn't overly explicit, but Jeff Bezos took a pretty big shot at Apple and the iPad this morning while introducing the new Kindle Fire: he flashed a photo of Apple's white USB cable, called syncing and backup a "broken model," and went on to emphasize the Fire's Whispersync cloud storage capabilities. The line and photo drew a big laugh, but it also underlined a subtle message within Bezos' whole presentation: the Kindle Fire is going to be the first hugely successful competitor to the iPad, and Amazon knows it. Hell, by the end of it all Bezos subtly hinted that Amazon would sell out of the "many millions" it was planning to make, and he's almost certainly right. Amazon's strategy of "premium products at non-premium prices" is a great one, and the Fire's $199 price tag is extremely compelling, especially given the general quality of the hardware and the wealth of content available to Fire owners from Amazon's various services.

But while the Fire and the iPad will almost certainly be the head-to-head comparison for most tablet buyers in the near future, I think Amazon made an even bigger decision about competing with the iPad that went unsaid during today's presentation: the Fire is almost completely geared around content consumption, not creation. It's remarkable, actually -- we didn't even see the Fire's email app today. That's in stark contrast to the iPad launch, during which we were treated to interminable demos of not only the email client, but also the iWork suite; Apple took great pains to emphasize the iPad's productivity capabilities. In contrast, all of the Android apps Amazon demoed on the Fire today were... games. 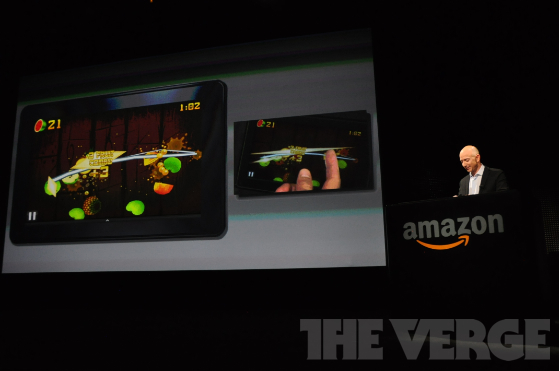 Of course, it makes perfect sense for Amazon to focus on delivering media and entertainment to consumers -- the company is first and foremost a store, after all, and it's naturally playing to its strengths. But in many ways the company is neatly sidestepping one of the central questions about next-generation tablets like the iPad: are they actually credible laptop replacements, or are they just for fun? The answer to that question is pretty important when the price of entry is $499, but it's almost irrelevant for the $199 Kindle Fire -- Amazon is nearing impulse purchase territory, the same territory that sold hundreds of thousands of $99 TouchPads and sells $114 Kindles day in and day out. It's easy to sell pure fun.

Who cares about productivity when there are 18 million songs, books, movies and TV shows to be had… and you can play Angry Birds?

And it's not just that all of the Fire demos today were about watching video or playing games -- it's that the Fire's custom variant of Android almost guarantees it'll never be compatible with Honeycomb or Ice Cream Sandwich Android apps that are actually built for tablet use. One of the strongest early criticisms of the iPad was that it was merely a big iPod touch -- criticism that quickly faded as developers took rapid advantage of the increased screen resolution and built an entirely new class of tablet applications. In contrast, the Kindle Fire is now and may always be little more than a big Android phone -- but unlike, say, the Galaxy Tab 7, it's a big Android phone intimately connected with the biggest and best content store in the history of the world. Who cares about productivity when there are 18 million songs, books, movies and TV shows to be had... and you can play Angry Birds? The Kindle Fire isn't the first serious iPad competitor because it can outdo the iPad -- it'll compete with the iPad because it does far less. 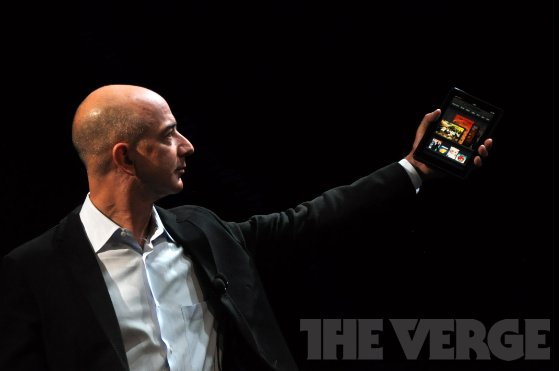 A few months ago, Steve Jobs famously called traditional computers "trucks" in comparison to his small, sleek iPad. It was an amusing and prescient metaphor, and it's one that works just as well to describe the Kindle Fire: the iPad might be a car, but Amazon went ahead and built a motorcycle.