The Galaxy Nexus / Nexus Prime smartphone that we've been seeing leak all over the internet is back, this time with a 90-second video tour of what purports to be Android 4.0. We know very well that Samsung intends to give us a "Google episode" of its Unpacked show at CTIA on October 11th, likely to introduce the next flagship Googlephone, and what we're seeing here could very well be that very device running that very OS. Jump past the break to see what's new.

The immediately apparent changes, when moving from a Gingerbread phone to this supposed Ice Cream Sandwich device, are the promised replacement of physical (or capacitive) Android keys with three onscreen buttons along the bottom, which are placed beneath four launcher icons and a link to your apps menu. There are a few new animations and visual effects applied, plus widget placement on homescreens looks to be nigh identical to the way it's done in Honeycomb. A subtle, ultra-thin line indicates where you are among the five homescreens and the lock screen offers a new unlock-to-camera option. We've got a couple of screenshots from the phone after the break and you'll find more at the Mobilissimo link below. 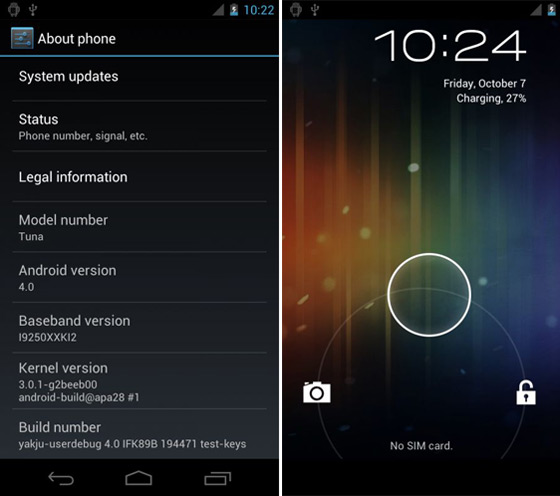