Nokia World is just around the corner. That means handsets, lots of shiny new mobile handsets both smart and dumb. And while we're expecting at least one slab of delicious Nokia hardware to launch on Microsoft's new Windows Phone 7.5 (Mango) platform, others will continue to support Symbian on its slow, steady march into the grave. Chief among the new crop of Symbian devices could be the Nokia RM-801 that just appeared in the FCC database. Besides being certified on AT&T frequencies the device shows a SIM slot in the gently tapered endcap alongside what appears to be a headphone jack — very similar to the layout and design of the Nokia N9.

Coincidentally, back in August a forum poster over at Daily Mobile treated us to a rumored Nokia 801 handset running Symbian Belle - a device said to be making its first appearance at Nokia World. Specs are said to include a 3.8-inch Clear Black Display with 640 x 360 pixel resolution, a 1.2GHz dual-core processor, and a 16 megapixel autofocus Carl Zeiss camera with Xenon flash and dual-LED lights for 1080p / 30fps video recording. In other words, the so-called N801 is looking very much like a followup to Nokia's N8 cameraphone. Other purported specs include HDMI out, a VGA front-facing camera, USB OTG, GPS, two speakers, and 16GB of internal memory expandable to 48GB via MicroSD. Nokia World begins on October 26th so we won't have too long to wait before the truth is known. 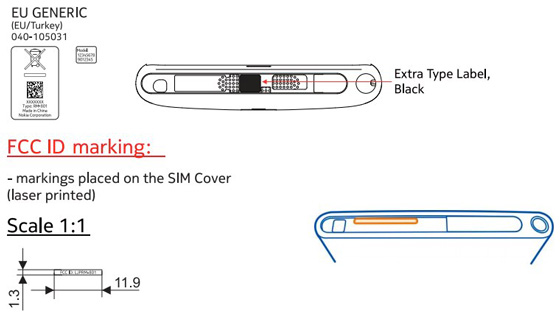