When we received word about the redesigned Wii this summer, Nintendo said it had no plans for a U.S. release, but things have changed — the company just announced a newly configured black Wii, which completely lacks any GameCube compatibility. The console is bundled with New Super Mario Bros Wii, a Super Mario Galaxy soundtrack CD, and Wii Remote Plus and nunchuk controllers... but like the latest European models, it no longer supports GameCube games and controllers and now sits horizontally, while still maintaining the same size and dimensions as the original. It's available in stores on October 23rd for $149.99 — the same price as the current Mario Kart Wii bundle.

Nintendo has also announced a limited edition blue Wii packaged with the upcoming Mario & Sonic at the London 2012 Olympic Games title. The bundle contains the redesigned Wii in Sonic-blue, Wii Remote Plus and nunchuk, and the game, but more interestingly, Sonic is displayed just as prominently as Mario on the box. This is a strange sight for those of us who grew up during the Nintendo versus Sega days, but obviously things have changed quite a bit since then. Naturally, it's only confirmed for Europe, where it will be released on November 18th. Pricing is unknown, but probably on par with the black Wii bundle. 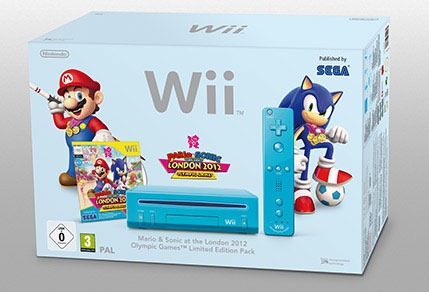