Facebook has acquired friend.ly, a Facebook app that allows you to meet new people and get to know your friends by asking and answering profound questions like "when was the last time you slept on the couch?" The Friend.ly blog says that the team will focus on new projects at Facebook, but Friend.ly will continue to operate as a separate service.

Facebook has bought its fair share of start-ups and clever web services over the years: Drop.io, FriendFeed, and Push Pop Press, to name a few. Some were purchased just for the people — Drop.io's Sam Lessin became product manager for Timeline — and others have become important parts of Facebook (FriendFeed). We don't know what plans Facebook has for its new friends, but we'll let you know if and when Facebook makes any announcements. 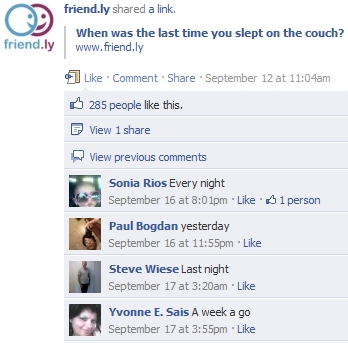