Sure, you've been able to run Android apps on a PC via Google's SDK, but that involves downloading an SDK, plugging in your phone, and figuring out how to run the ddms to get the emulator. Not exactly what we'd call easy, which is why BlueStacks is looking to make things a whole lot simpler for the person just dying to run Android apps on their Windows 7 desktop. How many people actually want to do that is another story, but the company's just released a free version of its alpha software to the world on its website. (Although, for those keeping track, it's actually been available on the Viewsonic ViewPad 10 Pro for a few months now). So is it worth your time and hard drive space? Read on for my impressions.

Once you've installed the program, the gadget above is placed on your desktop, and when clicked, out pops that small app tray with BlueStacks' preinstalled apps, including Bloomberg, Drag Racing, BubbleBuster, and an assortment of other fairly unappealing choices. Still, those give you a good feel for how the shell works -- select an app and you're taken to a full screen interface. The phone-sized app remains in the center and some navigation controls (back, home, rotate, zoom), with an extremely strong resemblance to those throughout Windows Phone 7 and Windows 8, line the bottom. Actually using the apps is quite simple with a mouse and keyboard, the bigger issue is that many of them are very slow to respond. In fact, that lag and the requirement that apps be viewed in full-screen mode happen to be my biggest complaints about the software. 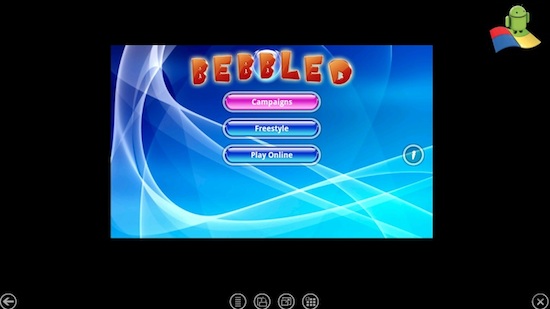 So how do you get other apps? Oddly, BlueStacks doesn't have an actual store app, but you can get others from its online portal, which unfortunately requires that you sign in with your Facebook ID. Even then the app selection is quite bad -- there are some random games and news apps, but there is no way to search for others. However, as a backup it has a Cloud Connect app for Android phones, which lets you sync all your apps from your phone. After downloading the app to my Droid 2, it took about ten minutes for my 10 apps to be brought over to the PC. (The free version caps the number of apps at 36; a Pro version will allow for unlimited apps.) There's no way of knowing which are downloading, but once synced, all of them, with the exception of Gmail, worked quite well.

As I stated from the start, I'm not sure how many people out there are dying to run Android apps on their desktop when they are simply a few clicks away from more robust websites that have been designed for mouse and keyboard navigation, but there's no doubt that BlueStacks is the easiest way to bring Android to Windows PCs right now. Now let's just hope the movement from alpha to beta kills the lag, full-screen mode requirement, and slow sync times.