While some of the Verge team was a little too excited about the final release of the new iPad app for Facebook, the social networking behemoth also pushed out drastic changes to its iPhone app and mobile sites. The app, which hasn't seen a major update since version 3.0 way back in August of 2009, was built by former Facebook engineer Joe Hewitt, and proved to be a refreshing, streamlined alternative to the clutter of Facebook proper. Zuckerberg and co.'s site has continued its enormous growth in the past two years, and the app team faced the challenge of an even larger ecosystem further expanded by Open Graph. With messaging, media, notifications, events, and third-party apps, there's enough here to constitute a rudimentary OS, so how well does the new Facebook for iPhone handle this flood of data and use types? Read on.

Note: This review focuses on the updated Facebook iPhone app, but you'll find many similarities in the new mobile sites (http://m.facebook.com and touch.facebook.com). 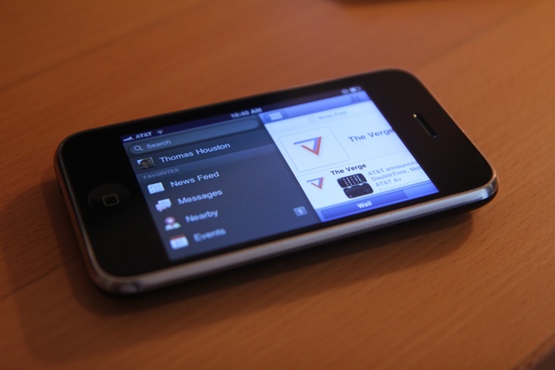 Visually, the new Facebook app is still identifiably Facebook at a glance, but the overly glossy buttons and labels seen in a generation of iOS apps have been toned down in favor of a more subtle dark blue gradient. The app's core functionalities are largely the same; chatting, messaging, and photo browsing are much like you remember them. On top of a much improved UI (more on that later), you'll find tightened up typography, thumbnail images, and menus across the entire app, making the app feel like a more mature release.

The first thing you'll notice missing is the old grid UI. Frankly, I'm glad to see it removed, as it required far too much diving into and out of menus. In its place you'll find a far more useful navigation menu, activated by the top left button marked by three horizontal lines. Once tapped, it slides your current pane to the right (like Twitter for iPad), revealing quick access to what Facebook has dubbed 'Bookmarks,' which are quick links to Events, Pages, Apps, and Account Settings. Select any view, such as Chat, and it will load on the overlaid pane and slide back over the navigation menu.

You may also notice that 'facebook' is no longer plastered across the top of your News Feed and many secondary pages. Instead, Friend Requests, Messages, and Notifications icons are now persistant across most of the app. And, with the grid banished, you'll get incoming notifications from anywhere in the app. For example, while typing in a Facebook chat, I received a message from another friend, which added a badge to the Notification icon. A quick tap slid the latest messages up for a quick response, and I hopped back to chat in two taps. Many of these design elements can be seen in the iPad app, but they've been smartly integrated into the iPhone's smaller screen size. The Facebook Search UI tweaks also offer a big improvement over previous versions; a search field prominently sits atop of the navigation menu.

What's missing from Facebook for iPhone? Well, quite a bit, actually. Many of Facebook's most recent updates shown off to such fanfare at f8 are nowhere to be seen in the mobile app. While you can share status updates with Facebook's new Google+ Circle-esque lists, there's no way to actually check in on your friends' updates via those lists; your only option is the full on News Feed fire hose. Similarly, public update subscriptions, the new ticker, and soon-to-be-public Timeline features are nowhere to be seen.

Oh, and yes, after years of requests, Zuckerberg finally added landscape view. Just tilt your phone to the side, and everything from your News Feed to your friends' check-ins is viewable in glorious widescreen. 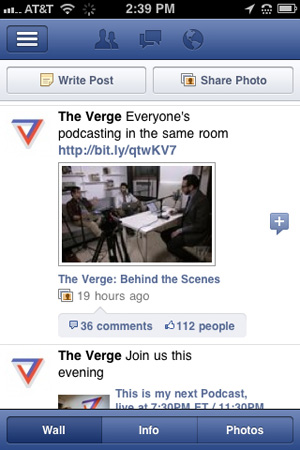 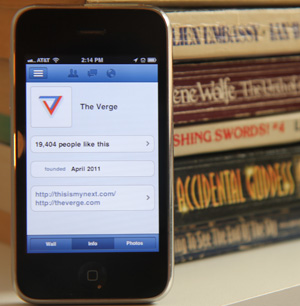 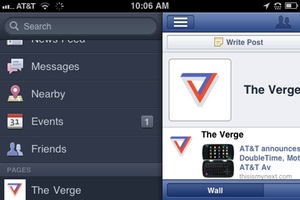 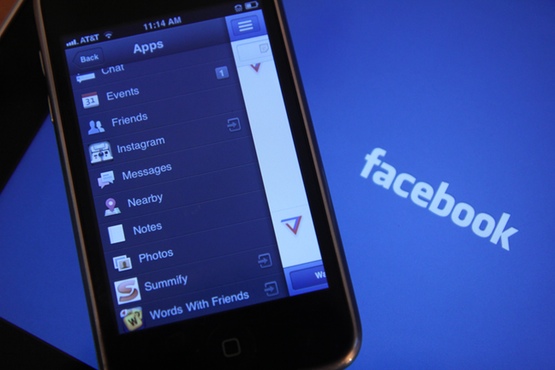 Like the iPad app, Facebook for iPhone also gets new support for apps you've connected to your profile. If you've hooked Instagram up to your Facebook account, for example, you'll find it in the navigation, and a single tap will open your iPhone's Instagram app (or Words with Friends, Yelp, and so on). For power users with many apps plugged into the Facebook ecosystem, it provides an easy way to jump directly to your most used apps, and, as Facebook is surely hoping, drive even more photos, messages, shopping, and gaming data back into its system. 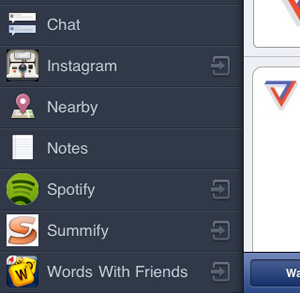 The new UI reflects an understanding of in-app multitasking, and Facebook's app team has improved on one of iOS's most popular apps. I'm able to slide from Events to my News feed and back to again Messages, with a detour to check a tagging notification, without the endless menu-hopping required in previous versions.

Evidenced by the prominence of apps and bookmarks that let you jump out of Facebook to a linked service, Facebook is clearly looking to ramp up the incoming data from apps like Words With Friends, Rdio, Gilt, and more. While I'd still like the option to browse my friends' updates via the Friend Lists that Facebook has been touting for the past few months, they will probably eventually be seamlessly integrated into the new nav UI. Put simply, this is a great upgrade for any regular user of the Facebook app for iPhone.