Do a dual-core processor and great keyboard make up for the Droid 3's lack of LTE and thicker stature?

The original Motorola Droid was a trailblazing phone when it launched. In fact, it’s a historical device — one of the very first Android phones and the very first to take on Verizon’s Droid moniker. But beyond all that, it boasted features unlike any other phone at the time — yes, back in 2009, a WVGA screen and Android 2.0 (along with Google Maps’ brand new turn-by-turn directions) were thoroughly modern. Then came the sequel — the Droid 2 — and unfortunately, it was rather disappointing. As an owner of the phone, I can attest that the camera’s almost intolerable, the keyboard’s nowhere near as good as others on competing Android phones (see the G2), and the performance was considered slow even in the pre-dual-core smartphone era.

The Droid 3 is, of course, the third child with the potential to set Moto and Verizon’s original vision back on track. And with a qHD display, improved keyboard (with a number row!), 8 megapixel camera, and a dual-core processor, it seems fairly prepared for the job. So, does the 3 put Motorola’s tried-and-true back on top of Verizon’s menagerie of Android handsets? Or is it just another one in the haystack? Hit the break to find out.


The Droid 3′s hardware is somewhat of a predicament. On the one hand, the all-black phone with its smooth, rubberish back feels weighty and very well-made in hand. On the other, it’s nothing but heavy and chunky. (Our own Chris Ziegler likes to describe it as a "tank.") According to the spec sheet, the .5-inch thick / 6.5-ounce Droid 3 is actually .04 inches thinner than the Droid 2, but that small bit of liposuction goes unnoticed. On top of that, the phone’s larger 4-inch display (the original Droid and Droid 2 had 3.7-inch WVGA screens) causes it to be .3-inches longer and weigh about .53 ounces more. What all those small measurements really mean is that the Droid 3 isn’t going to leave you much space in your pocket.

Now, of course, you could say the same of a number of Verizon phones these days — the HTC Thunderbolt and the LG Revolution barely leave room for a set of keys. However, they can’t claim to be hiding horizontal sliding keyboards. The Droid 3′s five-row keyboard, which I will get to later, certainly makes its heftiness more forgivable, but regardless, there really is something about the Droid 3 that makes it appear more boxy than its predecessor. Perhaps it’s the re-addition of the lower lip (it was cut on the Droid 2) or the loss of the chrome accents.

You’d think the extra space around the phone would make room for additional ports and buttons, but there’s actually a loss of one. Yes, Motorola did add a Micro HDMI port, but at the same time it nixed the dedicated camera button. I just don’t get why that was necessary; that said, the Micro USB port, 3.5mm headphone jack, and volume rocker are present and accounted for. The power button has also been moved to the center of the top edge — not a large change, but one that does require slight adjustment on the part of a previous Droid owner. 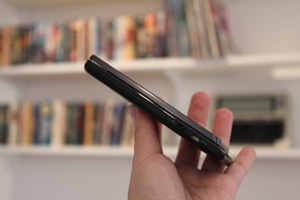 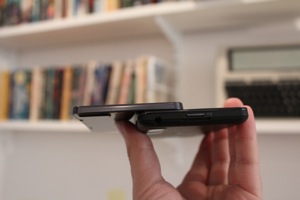 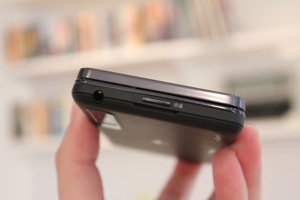 I may not be thrilled about some of the aforementioned aesthetic tweaks, but the new qHD display on the Droid 3 is an entirely different story. The Gorilla Glass screen is smooth and everything looks very crisp. It’s not as bright as Samsung’s Super AMOLED Plus panel, but colors were vivid enough for my liking. Yes, Motorola does seem to be using the same PenTile display as the Atrix here, which means you can still noticeably make out a grid of pixels. (AnandTech has a great write-up on the display right here.) In comparison to the Droid 2′s panel, it’s a big step up in terms of resolution, and I can’t really say I was bothered all that much by the pixel visibility at the typical distance I hold the phone from my face. 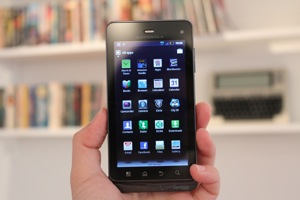 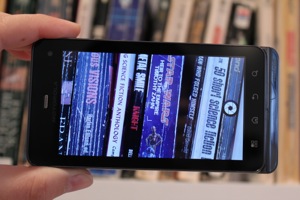 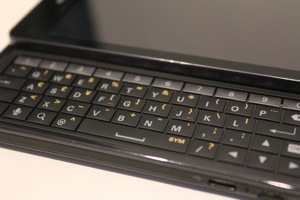 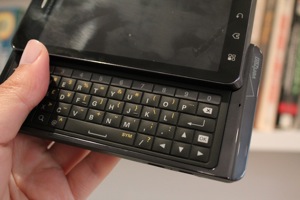 The keyboard is where the Droid 3 sees the biggest improvements from its brethren, and for a physical keyboard lover like myself, the new key spacing makes a world of difference. Unlike the previous two Droid keyboards, there’s now a distinct separation between the keys as well as a dedicated number row along the top. There’s no learning curve to this keyboard like there was with the Droid 2, and both the improved spacing and perfectly convex shape of the rubberish keys have allowed me to almost double my typing speed. You no longer have to feel around to make sure your fingers are on the right keys, making for a much better mobile touch typing experience. The keyboard is still backlit and the hinge mechanism still extremely taut. I think you get what I’m putting down: this keyboard is just great. 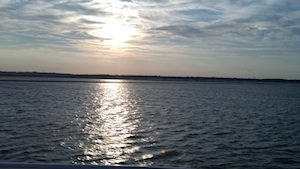 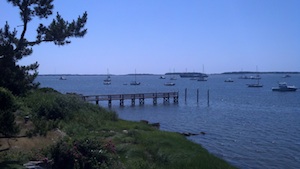 Clearly, I haven’t been exactly thrilled with the Droid 2, but the camera could be possibly the worst part of the package. There have just been too many terrible pictures taken, most of which have had to be promptly deleted. Well, the good news is that things have definitely been improved with the Droid 3′s 8 megapixel shooter. Now, it’s not as good as some of the cameras I’ve seen on Samsung phones or the iPhone 4, but images are mostly well-lit and clear. However, the cam and its LED flash have a harder time in lower light situations, which results in washed out and sometimes grainy shots. Basically, it’s still hard to take a picture without good natural lighting with this phone, and even then the images don’t look amazing. 1080p video capture is a very nice addition, but I blame the lack of a dedicated camera button for a few missed video opportunities, one of which included scantily-clad elderly people dancing on a boat.

The 2 megapixel front-facing cam takes expectedly grainy stills, though it’s sufficient for checking if you’ve got food in your teeth (luckily I didn’t!). Oddly, there’s no preloaded video chat software, though I guess the lack of LTE accounts for that decision. (In case you were wondering, the new Skype didn’t support video calling on the phone — I was able to see Dieter on his Mac, but I couldn’t get the Droid’s rear or front cams to fire up.) 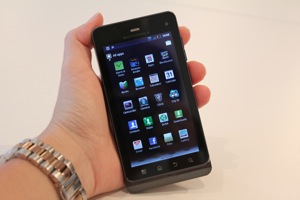 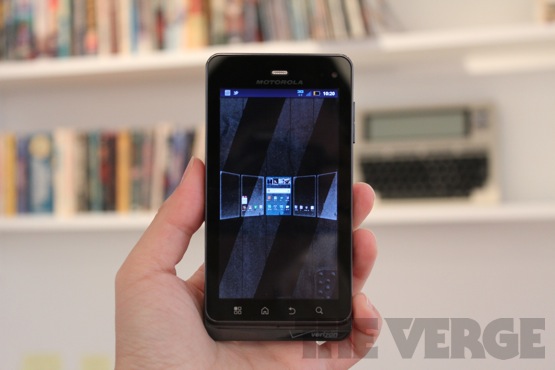 The Droid 3 runs Android 2.3 and Motorola’s newest version of don’t-you-dare-call-it-Moto-Blur. (No, seriously, we have been told by Motorola execs that it’s moving away from the Blur marketing.) Oddly, as we recently discussed on the podcast, it’s a slightly different version than what’s found on the Photon 4G and Droid X2 — oh yes, Blur fragmentation! — but there are a few welcome enhancements that beat the last version. The new contacts widget, which brings up a grid of your favorite contacts when you swipe down, and the 3D homescreen view add a bit of excitement to the OS. Like the Photon 4G and Droid X2 there’s a customizable homescreen shortcut dock and you can nix specific notifications in the notification tray.

The software itself is easy on the eyes, but I’m sure you know what I am going to say next: even with the Droid 3′s 1GHz dual-core Cortex-A9 processor and 512MB of RAM, it causes some noticeable lag. It’s not the worst I’ve seen from some of these skins (eh hem, Sense and previous Blur!) and the overall performance of the phone is markedly better than my Droid 2. At times the application launcher would take longer than it should to load, and cycling through homescreens wasn’t as snappy as it should be when I had a few apps running. Installing Launcher Pro solved a number of those issues as did turning off some of the animations.

Still, the phone does feel much faster than the Droid 2 and other single-core Android phones. General app performance was snappy and graphics rendering in Google Maps was incredibly smooth. And if you’re worried about the lack of Tegra 2 when it comes to games, TI’s chip was plenty nimble when it came to playing Nova, which comes preloaded. I wouldn’t categorize that one as crapware, but there are plenty more that I would — there’s a handful of VCAST apps, CityID, and Let’s Golf 2. I should also note that, like the Droid 2, the bottom back of the phone does get quite warm during moderate to heavy use. 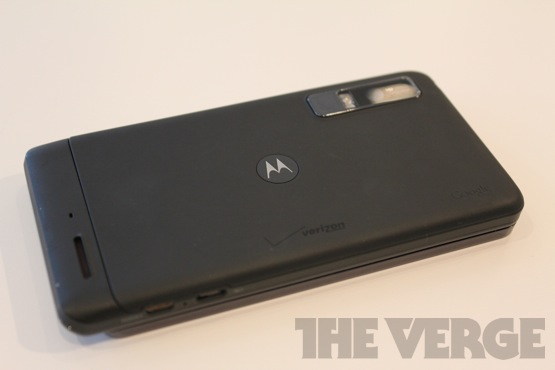 The Droid 3 may be one of the only new Android handsets in Verizon’s arsenal without LTE, and it surely shows in its battery life. The 1,500mAh battery has shown some impressive runtime in the past few weeks. I’ve found that I can make it through an entire day with sync turned on for two Google accounts and some light browsing and still have about 60 percent remaining by 6PM, leaving me with enough juice to make some calls to my sister and friends on the walk home from work. Speaking of those calls, most of them sounded clear and consistently loud. Additionally, in the past few weeks I haven’t dropped any calls in or around NYC. I have noticed lately that it has taken both the Droid 2 and 3 longer than it should to connect calls, which may very well be a Verizon issue. Sadly, I haven’t gotten to test it overseas, but it does house a GSM SIM card and dual bands for international use.

Of course, the strong battery life makes it hard to knock the handset for its lack of an LTE radio. Yes, it’s disappointing that Motorola’s halo Droid device (at least until the Droid Bionic is released) cannot brag about 15Mbps download and 6Mbps upload speeds, but on the other hand, I’ve been able to make it through the day without having a charger in my bag — and that’s not something I can picture Thunderbolt or Droid Charge owners saying. Data speeds are, by the way, pretty standard — I’ve been getting an average of .80Mbps up and .56Mbps down in lower Manhattan. Not knock-your-sock-off fast, but totally tolerable. 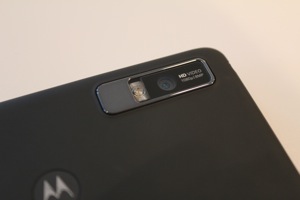 The third-generation Droid isn’t a trailblazer like its original forefather, nor is it a disappointment like the Droid 2 — it’s a middle-of-the-road phone

The third-generation Droid isn’t a trailblazer like its original forefather, nor is it a disappointment like the Droid 2 — it’s more of a middle-of-the-road phone. It’s got one of the best keyboards on an Android phone to date, a crisp qHD display, and some solid battery life. On the other hand, its somewhat sluggish skin, chunky bod, data speeds, and camera (with a lack of a camera button!) cannot match the competition from the likes of HTC and Samsung. Bottom line, the $199 (with a two-year contract) Droid 3 is a solid update to the Droid 2 and is the obvious (and only) choice for those looking for a Verizon phone with a fantastic physical QWERTY keyboard (what did ever happen to the HTC Merge?!), but it doesn’t quite have what it takes to put Motorola back in Big Red’s top spot. Hey, we’re looking at you now, Droid Bionic.