Back in June, Intel laid out its plan for the future of the laptop. These "ultrabooks," as Intel thought it would be more appropriate to call them, had to become more like phones and tablets — more portable, more nimble, and unlike the ultraportables of past, more affordable. They had to be, well, more like Apple’s MacBook Air. However, Chipzilla did more than just present its vision: it provided a guiding light for those non-Apple manufacturers with a set of guidelines on how to create said ultrabooks and set up a $300 million dollar fund to provide the cash to set them on the right path.

Acer’s Aspire S3 is the first of those ultrabooks, and it has all the raw components to help achieve Intel’s vision of the future laptop. The .51-inch thick / 2.98-pound system’s got a speedy Core i5 processor, an SSD / hard drive combo to help wake it from sleep in two seconds flat, 4GB of DDR3 RAM, and a $900 price tag. With the help of Intel, the performance and price pieces have been put in place. But neither of those are the S3’s problems. Hit the break to find out exactly what I'm talking about and how the first ultrabook fares.

There’s no way Acer didn’t have a number of MacBook Airs in the lab when it came to designing the Aspire S3; everything from the greyish aluminum lid to the black hinge piece is reminiscent of Apple’s laptop. Yet, while one would assume that would make the system extremely attractive, the S3’s boxy frame and darker coloring are oddly reminiscent of a business laptop from the 1990s, meaning it can be a bit of an eyesore. However, my biggest complaint about the exterior of this system isn’t actually the design — it is the mismatched materials. While the lid is made of aluminum, Acer had to cut the metal from the rest of the chassis to bring down costs; the bezel, keyboard deck, and bottom panel are all made of a grey plastic that sounds rather hollow when tapped. The result is a system with a severe split personality — it can fool you into thinking it's well built when closed, but open the lid and put your hands on the palmrest and keyboard and you’re staring down hardware made from distinctly poorer materials.

Yet, despite those build and design issues, the 2.98-pound system is one of the thinnest and lightest around, and that will likely be enough of a distraction from those aforementioned pain points. It’s not a uniform .66 inches like the Sony VAIO Z and it doesn’t taper to a mere .11 inches like the Air, but measuring .51 inches at its thinnest point and .68 inches at its thickest, the S3 takes up half the space in a bag than most laptops. There's no doubt that it's one very svelte and lightweight laptop that can easily be ported around in one hand. Of course, the optical drive had to be nixed for those trim dimensions, but Acer has squeezed in two USB 2.0 ports, HDMI and 3.5mm jacks, as well as an SD card reader. Unfortunately, those USB 2.0 ports (not 3.0, like Asus' Zenbooks) are positioned right next to each other on the back of the system, making it hard to plug in two peripherals at the same time. Although, to its credit, there’s no annoying port cover to flip open in order to to get at them, like with the Samsung Series 9. 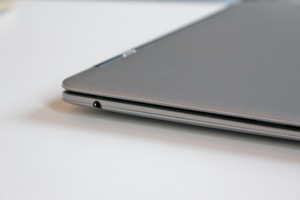 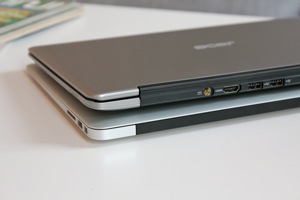 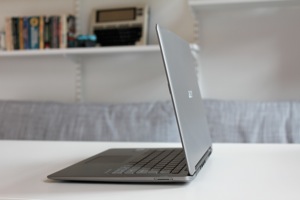 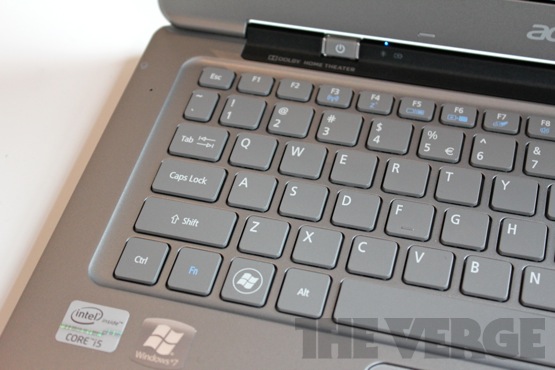 "Ugh, this keyboard!" That may not have been the very first sentence I typed on the chiclet panel, but it was surely amongst the second or third. As I mentioned before, the plastic deck feels shockingly cheap, and the matte keys sprouting out of it are no different; they are flimsy, mushy, and grossly flat. The spacing on the keyboard is perfectly adequate, but why Acer had to make the arrow keys smaller than a peanut (literally) is beyond me. Yes, the panel will get the job done and the keys themselves actually have a bit more height than those on the VAIO Z, but it can in no way compare to the backlit keyboards on the Samsung Series 9 and the MacBook Air in terms of build. In fact, I've seen Acer make better quality keyboards on its cheaper Timeline and Ethos series.

It probably won’t come as a shock that the 3.5 x 2.5-inch touchpad similarly suffers from quality issues. It too feels overly plasticy and chintzy like a Fisher Price toy. But I am happy to report the responsiveness of the multitouch surface is better than I expected — I didn’t encounter any jumping cursors and two-finger scrolling was relatively smooth for a Windows laptop. It isn’t as fluid as that on the MacBook Air, but dragging two fingers down the center with medium pressure took me down the length of a webpage and didn't stutter too much. 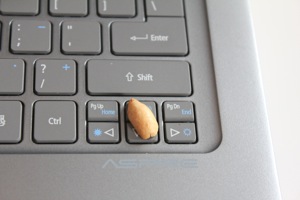 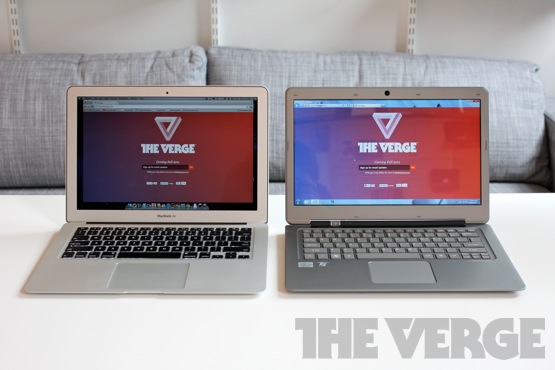 Sadly, things don’t perk up in this section. The glossy 1366 x 768-resolution display is sufficiently bright and actually better than the panels I’ve seen Acer use in the past on netbooks, but there's a graininess to the display and off-axis viewing is still a noticeable issue, with colors fading to black quickly when you sit to the right or left of the screen. Unfortunately, there’s no matte or higher resolution option like the VAIO Z and the pixel density is obviously worse than the 13-inch Air's 1440 x 900-resolution display, but the glossiness of the screen isn’t actually all that distracting.

The S3’s two speakers, which live on the bottom of the system, produce some of the most muffled sound I’ve ever heard out of a laptop. At full blast, Pitbull’s "Rain Over Me" was certainly loud enough to be heard through out a small apartment, but the sound was so tinny and crackled I don’t know why you’d ever want to do that. I will also forever wonder why Acer would put the volume shortcuts on those aforementioned tiny arrow keys — seriously, who thought it was a good idea to add another function to the smallest keys on the system? 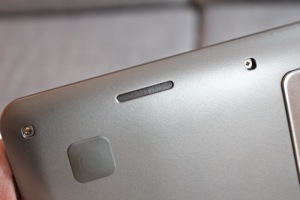 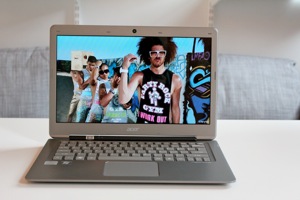 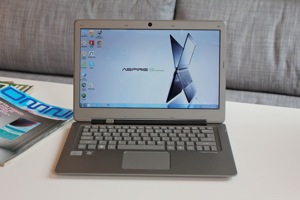 However, it’s on the performance side of things where Intel’s spent the most effort guiding manufacturers, and it certainly shows through in the S3’s performance. Powered by a 1.6GHz Core i5-2467M processor and 4GB of RAM, the system leaves behind the idea that ultraportables mean underpowered. However, it's the 20GB SSD and 320GB, 5,400rpm hard drive combo that help the S3 achieve the fast boot and resume times.

Obviously, Acer went with the dual-storage setup to cut costs, and to a large degree it works. The user simply sees one drive, though behind the scenes the 20GB just houses the OS, and the hard drive stores applications and files. The SSD makes good on Acer and Intel’s claims of resuming from sleep in just two seconds and booting in under a minute (49 seconds to be exact), but that snappiness isn’t carried through the rest of the OS since the slower rotational hard drive does the remaining work. Programs don’t install or open as fast as they do with the SSD-equipped Air, VAIO Z, or Samsung Series 9. That’s not to say the performance is slow — I never found myself having to wait too long to open a program and running multiple programs was no issue — but things just don’t launch or feel as snappy as they do on laptops with solely flash storage. That performance difference is also represented in the benchmarks below; the S3 trails behind the others on PCMarkVantage not because of processing power but because it uses a slower hard drive for most of its work.

On the graphics side of things, you get the typical Intel integrated graphics results. The S3 was more than competent at playing back local and streaming HD video and obviously wasn’t much of a gaming rig. It notched a fairly unplayable 10fps on Just Cause 2. During that gaming test the system's bottom left side got warm, but the rest of the machine stayed relatively cool and the fan in the back didn’t rev up. 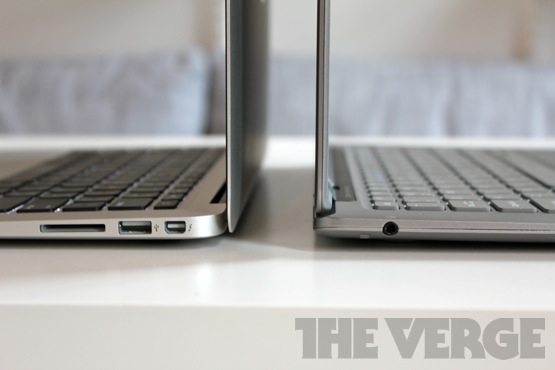 Of course, the last essential piece to the ultrabook puzzle is the battery life. Intel stated that ultrabooks would have anywhere from five to eight hours of juice, and Acer markets that the S3 gets six hours of life per charge. However, I could not reproduce those results during the last three days of testing. On The Verge battery test, which cycles through a series of websites and high resolution images with brightness set at 65 percent, the S3 lasted only 3 hours and 27 minutes. During my regular usage — writing this review, listening to Rdio, chatting with coworkers, and managing my email — I was able to squeeze out about four hours of untethered use. As you can see in the chart to the right, that’s almost half the runtime of the 13-inch MacBook Air and the Sony VAIO Z. For such a mobile laptop, it’s disappointing, to say the least.

Out of the box, the S3 boots Windows 7 Home Premium with a number of preinstalled programs from Acer. In addition to third-party programs like Barnes & Noble’s Nook software, Aupeo!, McAfee, newsXpresso, and Skype, Acer loads up the Desktop with shortcuts to eBay and Netflix’s websites. And then of course, there are Acer’s own applications, including the DLNA Clear.fi program and Acer games. The abundance of apps is unsurprising, but that doesn't make it any less annoying.

I still have high hopes for Intel's other ultrabooks, but the S3 is just an unfortunate first entry

Intel may have lots of great ideas about how the laptops of the future are supposed to look with its ultrabook vision, but the S3 isn't the realization of that dream. Sure, it is a step forward for Windows PCs and it has a lot of the elements that will be essential to the future of computing — fast resume times, solid performance, cool temperatures, and a thin stature for a more affordable price. But those things are very unimportant when the actual hardware doesn't match up and ultimately doesn't let you be truly mobile for more than four hours.At $899, the S3 may seem very enticing when looking at it on a webpage, but when you get this system out of the box you'll certainly wonder why you didn't go with something else out there, even if it is a bit thicker. The $880 Toshiba Portege R800 isn't as thin, but it weighs only a tad bit more at 3.2 pounds, has a great feeling magnesium alloy chassis, solid keyboard, and six hours of battery life. And, of course, if you can spend an extra $400 more, the entry level 13-inch Macbook Air or Samsung Series 9 will get you the razor thin laptop you were probably seeking from the start: the extra cash goes a long way in regards to battery life and build quality. I still have high hopes for Intel's other ultrabooks, but the S3 is just an unfortunate first entry.