Netflix reports AT&T fiber is slower than most cable internet

Netflix reports AT&T fiber is slower than most cable internet

The Netflix Tech Blog has a chart of the service's performance on top networks, and AT&T's fiber-optic U-Verse doesn't perform as well as you might expect. While Verizon's FiOS appears faster than everything else, AT&T is nestled down at the bottom end of the cable providers. Why? AT&T will tell you, but you have to do some digging to find the small print that says "fiber-optics may apply to all or part of the network, depending on your location." That means at some point AT&T may switch to a slower copper wire to get the connection to your home. Verizon makes it clear that its fiber-optic network goes "all the way to your door." This probably explains most of the speed difference Netflix is measuring. 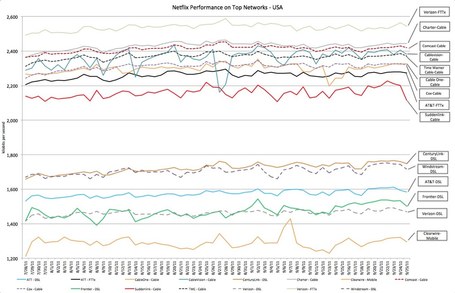 However, there are two caveats here. The chart shows average speeds across all Netflix customers, so it doesn't necessarily mean your AT&T U-Verse connection is slow. It's possible you have one of those connections with a little more fiber, "depending on your location." Also, Netflix recommends internet speeds of at least 500Kbps, and we've seen reliable performance even on a Clearwire connection which comes in dead last on the Netflix chart. Whichever one of these providers you use, it should be plenty fast enough for Netflix. That said, this chart is a fair indicator of each service provider's average streaming speeds, as the bottleneck is more likely to be on the customer's end than Netflix's servers. If you want to know how fast your connection is, do a speed test online at speedtest.net. Just keep in mind that some providers do "boosting" which gives a quick burst before slowing down — this provides a responsive internet browsing experience, but doesn't fairly represent how well a two hour movie would stream.