The Infuse 4G's gigantic 4.5-inch display may not be for everyone, but can some other standout features give it mass market appeal?

I don’t blame you for reading the headline of this review and thinking to yourself, not another Samsung Android phone. The company has flooded the market with smartphones that have very similar designs and specs — in other words, they are extremely hard to discern from one another. However, the Infuse could easily be picked out of a police lineup of Samsung’s family of phones. Its 4.5-inch Super AMOLED Plus display is mammoth and at .35-inches thick it’s said to be AT&T’s thinnest 4G phone yet. And then there’s the fact that it’s the first handset in AT&T’s arsenal to promise HSPA+ Category 14 speeds. Yes, the $199.99 Infuse packs some really distinct features, but are they enough to make it the best Android phone out there? Or even the best Android phone on the carrier? Hit the break to find out. 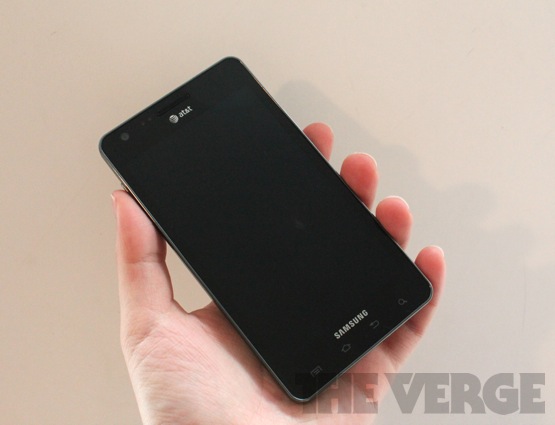 At first blush, people notice one of two things about the Infuse — either its incredibly large 4.5-inch display or its astonishingly thin stature. Yes, from afar the phone is a very captivating piece of hardware, especially when its bright Super AMOLED display is powered on (more on that soon). However, once you get the phone in hand things aren’t all that cut and dry. On one end, the 4.9-ounce phone is very light, but on the other, it feels a bit chintzy. I mentioned this same sort of feeling in my ASUS Eee Pad Transformer review, and just like that tablet, the back of the Infuse is covered with an etched piece of plastic. And that’s all it really is, a very thin piece of almost bendable plastic. The phone is light, but it just feels cheaper in hand than say my Droid 2 or an iPhone 4.

Then there’s the fact that the 5.2 x 2.8-inch phone is incredibly wide and long. The extra screen real estate is impressive but it also makes it fairly hard to hold. I do have fairly small hands and short fingers, which made it harder to stretch a thumb across the screen to drag down the notifications tray. I hate to make this a sex related issue, but I did find that the men I handed the phone to had an easier time holding it in hand and using a thumb to navigate the entire length and width of the screen. Point is, this phone isn’t going to fit in everyone’s hands or pocket.

Surrounding the phone are your typical ports and buttons. Along the top you’ll find a 3.5mm headphone jack and on the bottom a Micro USB port for charging. The left side houses a volume rocker and the right the power button. It’s a small gripe, but I do wish Samsung would stop putting the the power button on the side of the device and move it back up to the top. In addition to the phone’s 16GB of onboard memory, Samsung includes a 2GB microSD card, which lives under the battery. 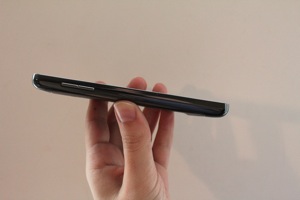 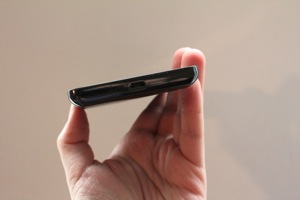 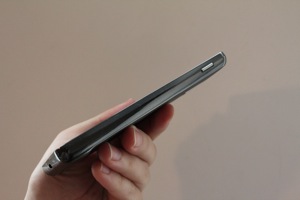 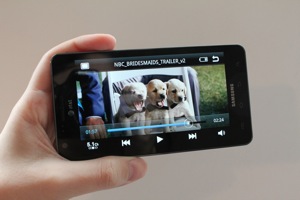 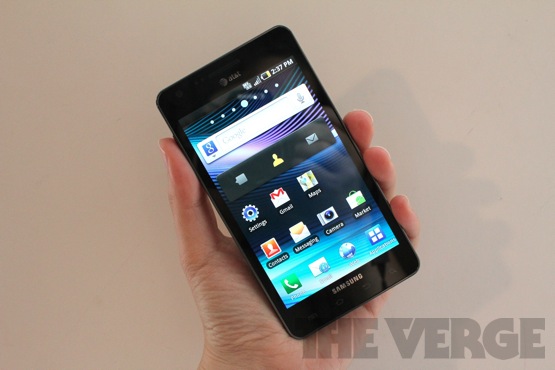 It goes without saying that the Super AMOLED Plus display is the Infuse’s standout feature. There’s just no denying that the display, which Samsung touts as having 50 percent more subpixels, is incredibly bright and crisp. And the quality of the panel along with the size actually makes it one of the best phones out there for watching videos and looking a pictures. Seriously, the experience of watching a handful of 720p trailers on the screen was just shockingly good. However, things come to a screeching halt with the 800 x 480 resolution. Compared to the qHD phones that are starting to come onto the market, it’s a pretty low resolution, and while the Super AMOLED Plus makes up for it, it may bother some when it comes to looking at webpages. As we discussed on the podcast, the average consumer may not have anything to compare this to, but I surely took note of fonts not looking as crisp and not being able to fit as much of a webpage on the display.


One of the best parts of this phone is its 8 megapixel camera. Both the indoor and outdoor shots I took with the Infuse in the past week were pretty great. The autofocus was quick and the flash didn’t over blow any of the shots I took at a concert. To match that, it also captured quality video. As you can see below, even the 480p video I shot at a concert looked extremely clear, and when you consider that I was at least 20 feet back from the stage, both the sound and images are impressive. As you would expect, jacking up the settings to 720p, captured even crisper video. The biggest issue I had with the camera was the lack of a dedicated camera button. That said, the app does launch quickly..

There’s also a 1.3 megapixel front facing camera for video calls, but I really only used it to check if my eyes were red from this seriously agonizing allergy season. In all seriousness, that cam takes fairly grainy shots, although the shots were crisper than the ones I’ve taken with the recent Honeycomb tablets. 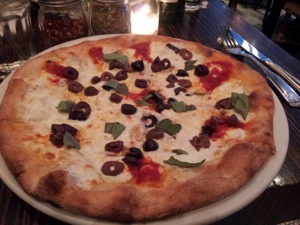 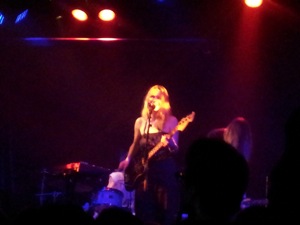 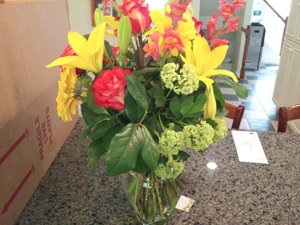 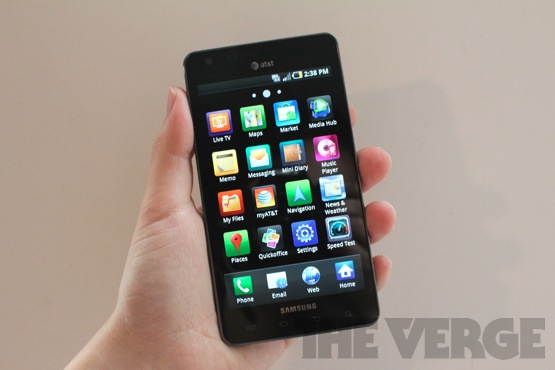 Android 2.2 with Samsung TouchWiz 4.0. That’s what you get in terms of software with the Infuse 4G. Obviously, the skin is a personal preference, but other than that Samsung bundles the phone with its Media Hub, Music Player, and Video Player apps. AT&T also throws on its FamilyMap, Navigator, and Code Scanner. There’s also a U-Verse Live TV shortcut, but you actually have to download that from the Market. For the most part, this is your typical Samsung Android experience, although I do have to say, the large screen does make for a very spacious keyboard. And speaking of keyboards, you’ve got a solid choice between the default Samsung layout, Swype, and the stock Android one. 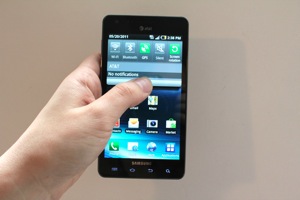 One of the bigger knocks against the Infuse 4G is that it doesn’t pack a dual-core processor like its Galaxy S II relative. However, the 1.2GHz Hummingbird processor was quite snappy and the phone is really quite responsive. It’s not as fast to launch apps or rotate the screen as dual-core phones like the Atrix, but it isn’t going to slow you down by any means.

But I can’t say the same for loading webpages. We’ve been pretty hard on AT&T for its misuse of the term 4G, and while the Infuse is actually one of the the first devices to have HSDPA Cat 14 and HSUPA Cat 6 radios, it doesn’t quite live up to all the speed promises. Theoretically, the phone should provide 21.1Mbps on the downlink and over 5Mbps on the uplink. Of course, those speeds aren’t really to be expected, but in reality, the Infuse just isn’t that fast, at least in comparison to WiMax and LTE devices. In my testing in NYC, the Infuse averaged 2.8Mbps downloads (3.34Mbps in some areas) and 1.16Mbps uploads. Additionally, in actual use, I found webpages taking just as long to load as they do on my Verizon 3G Droid 2 and certainly they were much slower to load than compared to an LTE phone like the Thunderbolt.

All that said, the battery life is actually quite decent for such a big screened device. With background sync turned on, the 1750 mAh cell was able to get through a day of sporadic web surfing heavy camera use, and a few voice calls without having to recharge. Speaking of those voice calls, they sounded relatively clear and there’s actually something about the larger face of the phone that seems to block out background noise. 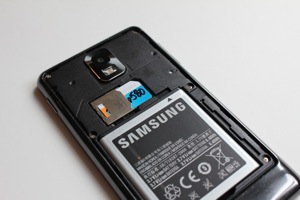 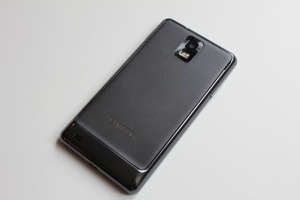 The Infuse is somewhat of a mixed bag

The Infuse is somewhat of a mixed bag. It’s a gorgeous phone, but it feels a bit cheap in some respects. Its screen is large and the quality of the Super AMOLED Plus display is top notch, but its lower resolution leaves more to be desired. And while it has a “4G” in its moniker, it’s truly not a very fast phone in terms of data speeds. There’s a lot to like with the Infuse — I really love the camera, screen quality, and endurance — but in the end, it just isn’t a colossal hit like the Galaxy S II or the Motorola Atrix. It is, however, a colossal sized phone with some standout features.