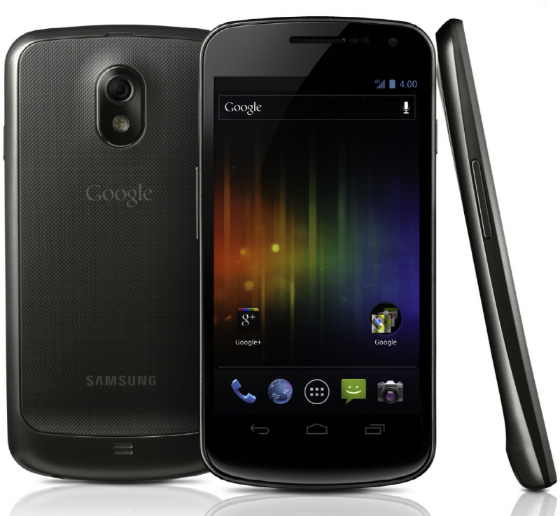 By now there aren't many surprises left, but Google and Samsung have officially announced the Galaxy Nexus with Android 4.0 Ice Cream Sandwich, coming November to US, Europe, and Asia — NTT Docomo in Japan, no other carrier announcements at the moment. The flagship phone features a 4.65-inch 1280 x 720 HD Super AMOLED screen (which, according to our calculations, is roughly 315ppi —not quite the density of iPhone 4, but very close) with a reported 1/100th of a millisecond response time.

Inside, there's a 1.2GHz dual-core processor, 1GB of RAM, 16GB or 32GB internal memory, and a 1750mAh battery. The Galaxy Nexus has a 5 megapixel camera with LED flash on the back, which Samsung says will take stills "with zero shutter lag" and video up to 1080p at 30fps, and on the front a 1.3 megapixel camera for video calling.

Connectivity-wise, we're looking at Bluetooth 3.0, USB 2.0, 802.11a/b/g/n Wi-Fi (2.4GHz and 5GHz), and NFC. It includes the standard accelerometer, compass, gyroscope, and light / proximity sensors, adding to that a barometer. It supports pentaband HSPA+ and, according to the specs, an LTE version will be available "depending on the region" (yeah, we'd go out on a limb and guess the US, as well). All that in a curved form factor that weighs 135g and is 8.94mm thin (Samsung specified this is for the HSPA+ model, implying the LTE model could be thicker — we'll find out and let you know).

Android's UI has been tweaked considerably in Ice Cream Sandwich — a "pure Google experience" here, no skins. With nods to Honeycomb, it's a much cleaner interface that's driven entirely on screen. That's right, no more hardware buttons — home, back, and recent apps (i.e. a multitask button) appear right on the display. The iconography is crisp, and the new custom font — Roboto — is just beautiful. Other great new features include face recognition for unlocking the device (cool when it works, and as the press event is showing us, that's not fail-proof). Voice dictation is now nearly instantaneous in transcribing your speech. The still Camera app has an impressive "zero shutter lag," some face tracking features, and a photo editor that includes Instragram-like filters. The final unveil is content sharing over NFC with the new Android Beam app — there's also an associated API so devs can get their apps Beaming, as well.

Looking for a recap of the entire unveiling event? Check out our now-archived Google Ice Cream Sandwich event live blog! And if you're so inclined, here is Google's official Galaxy Nexus page.